Herban Dispensaries is a cannabis cultivator, dispensary and delivery service in Antelope Valley, California. The founders John Tanner and Samuel ‘Chip’ Myers are lifelong friends who decided to start a business together. John and Chip’s grow is their number one priority, and they take pride in using advanced cultivation techniques to produce high-quality flowers. Their flowering zones are 100% LumiGrow LED lit. 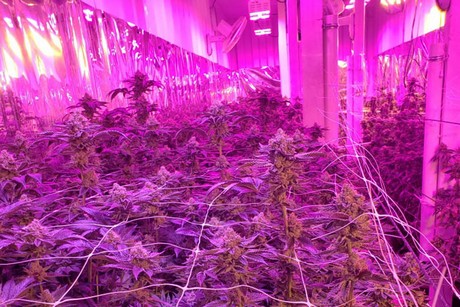 Unimpressed with HPS
Herban Dispensaries’ 1,280 square foot facility consists of four shipping containers with sole-source lighting. Since the facility has limited amperage, John and Chip needed an energy efficient lighting solution that would not generate excess heat. They learned about LumiGrow through Silver State Relief, who has been growing with LumiGrow fixtures since 2015.

John and Chip tried a number of LED lighting solutions before selecting LumiGrow. They were underwhelmed by the other LED options they trialed - many had the same light footprint but cost more. They even briefly gave HPS a chance and hybridized their lighting solution by adding HPS fixtures to an eighth of their growing space. John was unimpressed with the results.

“We didn’t notice a difference [with the HPS grow lights mixed in] compared to all LED,” recalls John, “We get more out of [LumiGrow] lights with CO2 [than an HPS-LED hybrid system]. [The HPS] is not worth the higher electricity bill, the hassle of changing bulbs… dealing with more heat.”

In a facility as compact as Herban Dispensaries’, each grow must be timed perfectly. John and Chip stagger their crops so that they have a harvest of 100 plants every 2 ½ to 3 weeks. They grow the plants under their LumiGrow fixtures for 12 hours a day for about 10 weeks to produce flowers. To maximize light penetration in the canopy, they strip out the bottom leaves of the plants twice per flowering cycle. John and Chip are pleased with the high-quality colas their plants are producing.

“With the [LumiGrow] LEDs, the bottom nuggets turn dense. Instead of growing on one-third [of the stem], our plants grow [high-quality buds] on two-thirds,” says John, “We used to separate [the buds] to make two different qualities. Now we put it all in the same bag – it’s that good. There is no larf bucket.”

“The trim is [practically] shake,” adds Chip, “It’s so rich and there’s so much of it. It’s phenomenally high quality.”

“LumiGrow’s customer support is by far the best. That’s why we’re loyal,” says John, “We like working with them because they want us to succeed. We recommend LumiGrow lights to everyone.”