Growing cannabis for a female-focused market

While walking through the halls of most of horticulture trade fairs, it is not necessary to be an acute observer to notice that the industry is male-dominated. Among other things, this characteristic derives from the close connection between horticulture and the financial industry: the latter too has always been very male-dominated, thus resulting in women experiencing insurmountable difficulties to obtain capital for financing their entrepreneurial projects, according to a 2017 report by the Organisation for Economic Co-operation and Development.

Initially, the advent of the cannabis industry did not cause any shift in such worlds. The cannabis industry is widely understood as a subset of horticulture, and thus, this too is closely connected to the financial world. However, this has started to change recently. Eve & Co. is one of the very few cannabis Canadian companies where women represent more than the 60% percent on the board of directors. At the same time, more than 65% of employees are women, thus making Eve & Co. a sort of bastion for female representation within this nascent industry. “When we applied for a license, only 5% of Canadian cannabis companies had women in leadership roles”, explains Melinda Rombouts, CEO and president of Natural Med Co. and Eve & Co., “That number is indicative of the widespread attitude that this industry has towards women. It has always been harder for us to start businesses. However, this has started to change.” 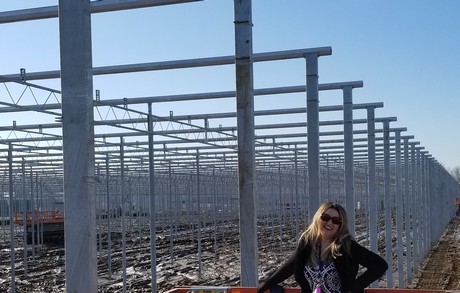 According to Melinda, banks have started providing funds to entrepreneur women: “As of today, 15% of Canadian companies have women in leadership roles. Even though this number has increased over time, it is a clear indication that women are definitely under-represented within this industry. Eve & Co.’s role is to address this issue by trying to build a different type of corporate culture.” This is why the company aims at creating a female-focused cannabis market. “Of course, I am talking of additional products, not of dried buds”, Melinda says.

Pharmaceutical standards
Eve & Co. wants to spread its vision of a more inclusive cannabis industry and market not only in Canada, but also in Europe. However, Canadian regulations are not the same as European, which are even more restrictive and defined. This is also one of the reasons why some Canadian companies struggled to comply with European regulations. “Health Canada has the same demanding standards whether for medicinal and recreational markets. Therefore, companies here grow everything under the same standard”, Melinda explains. The fact that regulations vary according to the country does not mean that these do not ensure high quality or that it is impossible to comply with some of the rules. “Even though Health Canada’s requirements may be stringent, the Cannabis program under Health Canada’s regime is respected globally”, Melinda points out. “Since we want to export to Germany, we are growing under strict GMP standards.”

“Good Manufacturing Practice (GMP) standards in the EU are be even more demanding than in Canada”, Melinda says, but Eve & Co. can rely on an impressive facility which the company keeps expanding over time. “Our greenhouses are set up as a positive pressure system and are comparable to a pharmaceutical clean room. So, basically, the positive pressure ensures that no extraneous substances can enter and contaminate the product. The facility is built to pharmaceutical standards, as well as the processes such as sanitation. The SOPs – Standard Operating Procedures – are pretty immense: every single procedure is outlined, and we have to ensure that our product is grown to GMP and pharmaceutical standards.”  Additionally, Melinda points out that “within three months, our facility will be 1 million sq. ft. of greenhouse space.” 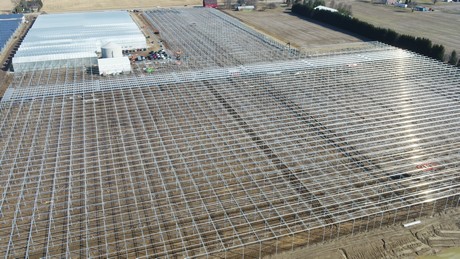 According to Melinda, the most advanced greenhouses are designed and manufactured in the Netherlands, which she calls “the greenhouse capital of the world”. At the same time, the company is located a couple of hours from Leamington, Canada, which is the location of the greenhouse experts in North America. “All our greenhouses come from Bom, a Dutch greenhouse manufacturer. Since we are close to Leamington, we have access to many companies with great experience in the greenhouse industry.  Specifically, we worked with Universal Fabrication who is completing the construction.”

Melinda points out that it is of utmost importance to work with companies with proven experience when it comes to expansion projects. “When expanding a growing facility, the key is to work with the right companies. My family is all in greenhouse production as well, so we already have experience in greenhouse construction, and we know which companies are best suited, with the right expertise”, Melinda says. “I think that some of people who enter into the industry may not have a greenhouse background, and therefore they may not have known who to work with or what kind of facility or equipment they need.”

Export from Canada
Canadian regulations allow for mass production to meet the demand of the country, and at the same time allow companies to export their product. “However, we will not export to the USA. On a federal level, cannabis is still illegal there. Hence, we cannot cross the U.S. federal border with our product. If we ship our product to Europe, there are additional procedures to ensure compliance, such as shipment on a direct flight from Canada to Germany, as the plane couldn’t land in countries where cannabis is not yet federally legal.” 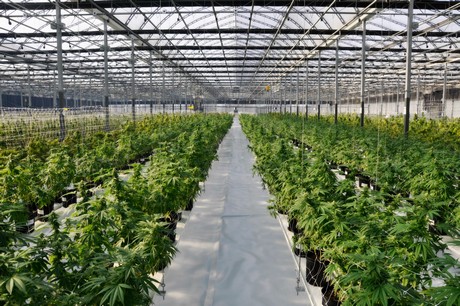 Even though some who entered the cannabis industry may lack either experience or instinct, Melinda could rely from the beginning on an extensive horticulture knowledge as she has a degree in plant biology and has already run a number of successful businesses including a seasonal flower greenhouse production. “I felt I was already well prepared due to my university education and hands-on experience. However, there are a lot of end processes to further develop and refine”, Melinda points out. “I don’t feel there is any significant difference between a cannabis plant and any other plant, in the vegetative state.” By the time the cannabis plant starts the flowering phase, the situation changes quite considerably: “Basically, you initiate flowering by reducing the day length and the plant commences bud production. However, the end stages require additional experience, such as recognizing the proper time to harvest to optimize the THC levels. And then, of course, there are all the processing steps.”

A female-focused cannabis market
When Melinda says that she wants to target a female-focused cannabis market, she is specifically referring to additional products. “For example, we are interested in beauty creams and acne creams due to the possible anti-inflammation properties of CBD. Also, female sanitary products such as tampons infused with a 1:1 for pain relief. Another interesting future product they are researching is a deodorant with CBD for women, specifically those who had breast cancer. Once a woman has breast cancer, her body may be ultra-sensitive to chemicals. Therefore, this type of all-natural product may be very helpful.”

Melinda just came back from a trip to Nevada, where she visited numerous Cannabis processing operations. “There are so many types of derivatives and extracts”, Melinda says. Medical cannabis has been legal for five years in some US states, and this time advantage can be clearly seen in the development of their processing units and their use of cannabis additional properties. “For example, they are more advanced in selecting specific terpenes to give the products additional features. In other words, they are working with cannabis for certain properties”, Melinda remarks. “We would like to work with some of these companies and bring these great advanced products not only to the Canadian market, but the European as well.”