Regeneration of plants from dividing cells is a key process in agriculture. Horticulturists use it to grow new plants from small cuttings. Until just recently, the mechanism driving the regeneration process was largely a mystery. Researchers at Wageningen University & Research can now demonstrate how organs in plants send signals to tissue repair systems after being damaged, making it possible to stimulate this process in the future. The research is published online in Cell on 4 April.

The plant regeneration process has been used for centuries in horticulture. "Plant breeders injure plants by taking cuttings, grafting and by putting plant parts into tissue culture. This creates new plant tissue, such as leaves, flowers and roots", says Professor of Plant Developmental Biology Ben Scheres. "But we cannot activate the regeneration system in all crops. Thanks to our research, we are one step closer to being able to stimulate the molecular mechanism of regeneration in multiple crops."

Root injury
After their shoots or roots are damaged, plants produce the signalling substance jasmonic acid. It has long been thought that this substance mainly served to stimulate chemical resistance to invaders such as insects and nematodes (parasites that cause plant diseases) and to suppress growth. The work carried out by Wageningen researchers shows that jasmonic acid communicates with the plant version of the retinoblastoma protein via a new signal route, and that this route is important during the growth of roots in the soil and for interaction with nematodes. 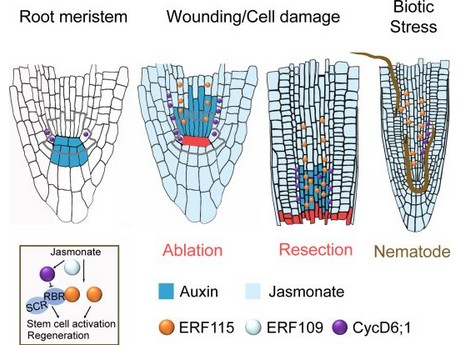 Spectacular capacity for regeneration
"Retinoblastoma is not the only actor that plays a key role in stimulating cell division in both animals and plants. It is fascinating that jasmonic acid is related to prostaglandins, which stimulate stem cell activity in animal systems during tissue regeneration", says Ben Scheres. "Perhaps in plants, with their fantastic ability to regenerate organs and entire plants from single cells, we can learn how to optimally stimulate the molecular mechanism of regeneration for agricultural applications. It may also prove to be medically relevant if it turns out that the process behind tissue regeneration in plants is related to the regeneration of body structures in animals."

The research was conducted by lead author Wenkun Zhou, Postdoctoral Researcher in the Plant Developmental Biology department led by Ben Scheres in collaboration with the Nematology department as well as Chuangyou Li's research group at the Chinese Academy of Sciences.