"By water-cooling our LEDs, we reduce heat and air conditioning load"

Cannabis growing facilities are known to generate a great amount of heat which, if not monitored and controlled properly, could result in issues that require a real big effort and a substantial amount of money to fix. One of the components of cannabis greenhouses that create a lot of heat is the lighting system. "The industry is seeing a shift from HPS to LED lights, as the former, although cheap in terms of initial cost produces too much heat, (over 4000 BTU per hour for the most powerful fixtures) forcing growers to resort to expensive HVAC solutions. While LEDs also produce heat, due to their increased efficiency level, they generate on average of 25% less heat than a comparable HPS fixture," Troy Robson with Agnetix points out.

Controlled Environment Agriculture (CEA) is a growing trend that uses technology-based approach toward plant and food production. This includes cannabis indoor and greenhouse grows. Resorting to these kinds of solutions greatly facilitates the management of a cannabis growing facility, but there are things to take into consideration and issues to solve nonetheless.

“The greatest problem that growers have is that current HPS lighting systems require you to purchase 3 watts of cooling for every 1 watt of lighting. This business model requires growers to buy an enormous amount of air conditioning solely for the purpose of controlling the environment they are putting the lights in,” Troy Robson with Agnetix points out. Agnetix is a company that produces an advanced technology horticultural lighting platform that incorporates LED lights equipped with a water-cooling system that precisely addresses the issue that Troy pointed out. Troy not only works for Agnetix, but he also has a long background as a cannabis grower. “The first problem many greenhouses face is a lack of power. Traditionally, greenhouses have been used to grow incremental crops throughout the year. Increased need for more food and more crops has made the implementation of supplemental lights a standard, rather than a luxury or an extra,” he explains.

Water-cooling system solves energy problems
Agnetix designed its water-cooling system, which not only helps growers control the climate in a more efficient manner, but also solve additional business problems, according to Troy. “By water-cooling our lights, we are able to reduce the heat in the room and the air conditioning load required by 50%. Additionally, by providing a far greater amount of usable full spectrum light for the plants, harvest times can be shortened,” he continues. 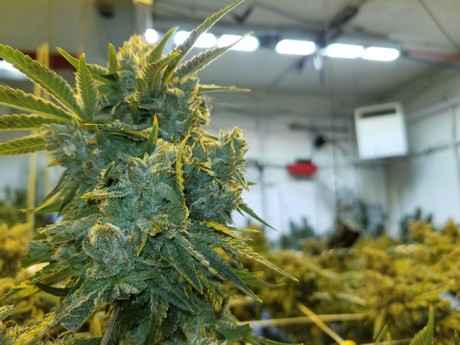 Two products that Agnetix offers to growers are the A3 single density light and A3DD (double density). Troy noted: “These solutions can be used for indoor grows and greenhouse facilities. The A3DD has double the number of LEDs than the A3 and light output is increased by about 50%. These can be used to cover a 10’ by 10’ area, whereas the A3 single density covers a 6’ by 6’ area.” Troy remarks: “We can typically use 25-30% fewer fixtures than HPS to provide more light to the same amount of area at the same time reducing the grower’s cost and electricity needs."

He continues, “Usually, growers struggle to have enough daily light intensity in their facility to grow their plants properly during the winter months. Growers assume they can get enough sun, but the reality is that you don’t, as there can be cloudy days, or storms, that inevitably alter the amount of light getting into the growing facility.”

Troy also pointed out that the Agnetix lighting solution can solve additional business problems through the use of the water-cooling system. “For instance, you are producing a large tank of hot water every day from the lights and that hot water can be used for other applications within the facility such as supplementing the hydronic heating system that a lot of these facilities use during winter times or creating hot water to use in the washing areas.”