After Constantijn van Oranje, who was invited by Royal Brinkman, talked about innovation for an afternoon, it was his remark about cannabis that stuck. His advice to the growers who had gathered in the old auction hall in ‘s-Gravenzande that was transformed into an event location: don’t wait for a quick change in the Netherlands, because it is not going to happen. It is happening in Canada and the United States right now, so that is where you need to be.

The presentation given by Constatijn van Oranje, Special Envoy of StartupDelta, was planned all the way at the end of the program that was presented to over five hundred people, of which a large group were growers. They were brought to the event location, which left a great impression, by shuttle bus. Upon entering, both young and old immediately asked each other whether or not they had been at the auction when it was still active and pointed at the auction clock, which undoubtedly brought back nostalgic memories. 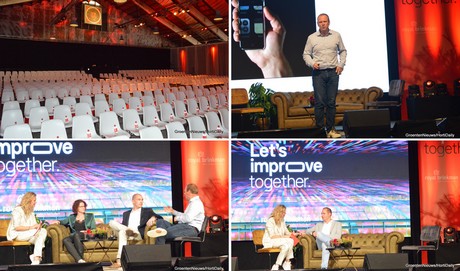 Be warned: even though things are going well, innovation is necessary
But the main goal in ‘s-Gravenzande was to look ahead, this was supported by the theme ‘Let’s improve together.’ The people who were invited had to, in the words of chairperson for the day Sophie Hilbrand, be informed, inspired and activated. The first speaker that was given the opportunity to do so was Steven van Belleghem. He started things off and quickly turned the topic to artificial intelligence. There are people who get very excited about this topic, such as Steven himself who is the leading figure in this area at Royal Brinkman, and the requisite hands were raised in the hall, but there is also a group that is afraid of this development.

For that group, but also for the people who are enthusiastic, it is good to keep in mind that despite the technology there is always a function that can only be fulfilled by a human, to use the technology in a personal way, aimed at customer satisfaction. A combination of digital and human language so to speak. According to Steven, companies that plan to start work on this in their respective fields need to make sure to stay one step ahead of their competitors. That can then in turn result in success, and can prove very advantageous in regards to their stock price, as it did with pizza maker and delivery service Domino’s - a shining example of a company that the audience, whose position the audience could imagine themselves in. It is, after all, no Google, Amazon or some Chinese giant, and it shows that you don’t have to be.

There is, however, one problem: it’s going so well here that there is no need to innovate. Because of this, there are not enough real steps being taken, also the industry has a tendency of keeping a close eye on one another and with this keep each other under control and maybe even stop each other, while on an international scale the competition is leaping ahead. So be warned. 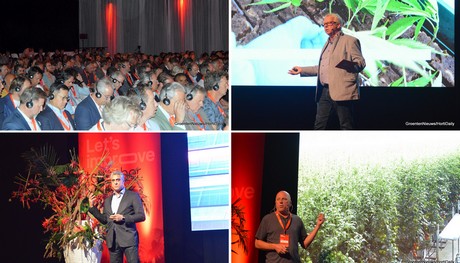 Laughing and calculating with cannabis profits
After the first break, the second part of the program followed, people were given headphones and in each room two speakers took the stage at the same time. The audience could choose which speaker to listen to on their headphones, which just goes to show that technology can do almost anything. The speakers on podium A talked about the climate (this was done by climate expert Reinier van den Berg), branding (Ron Simpson of The Avocado Show) and packaging (Rob Verhagen, Oerlemans Packaging) and got quite a few laughs in with the audience.

On podium B, three other experts talked in English about their field of expertise, like medicinal cannabis (Laust Dam), crop protection and the Bayer Crop Science strategy (Kamel Beliazi) and the differences between cultivation in the Netherlands and North America (Casey Houweling). There was not as much laughter as a result of this podium, but people were listening carefully to what was being said.

For instance to how Laust Dam, vice-president horticultural development at Aurora/Alps and director of MediaSun in Canada, talked about the developments in the field of cannabis. The fact that with the cultivation of medicinal cannabis 10,000 euros per square meter can be earned made many people start making calculations on their tablets. That a lot of money can be made from ‘those little green leafs,’ is not a secret anymore, but numbers like those always grab your attention. With, let’s say, tomatoes or cucumbers you will make significantly less. Laust would therefore advise to switch about five to ten percent of that production for the cultivation of cannabis if, and here is where the problems lies, the European government allows it. As soon as that time has come, Aurora is more than happy to be a part of it.

Then the music started playing and Kamel Beliazi, Head of Crop Strategy Horticulture at Bayer Crop Science, took the stage on podium B. He took this chance to convince his audience of the ‘new course’ the market leading company wants to embark on with an eye on transparency. Kamel passed the torch to Casey Houwling, grower and president of Houweling’s Group of Companies. He talked about the challenges and the difference between cultivating in North America and the Netherlands, of which more will be discussed later on.

Doing things better and smarter
After a second break, Tom van Mil, CEO at Royal Brinkman, took the floor and talked about his views on the industry and the theme, ‘Let’s improve together.’ Ton went into detail about how Brinkman currently operates. People are really in the company now and some lead the way, and they said goodbye to the people who held them back. This might seem like a drastic step, but according to Ton, a step that needs to be taken in order to do things better and smarter. That last one Ton also wants to do with the industry. Ton talked about how he expects that in the coming year's mergers between suppliers will take place so that only the large companies will remain. According to him, this will also improve on the willingness to cooperate, which currently still proves to be lacking. As for doing things smarter, for that the story told by Steven about digital and human language will come in handy among others.

From left to right going clockwise: Ton van Mil, Constantijn van Oranje, Sophie talking with the Prince and Simone Keijzer and Raffi Balder from HortiHeroes that has launched a new innovation platform.

Dream big and don’t wait
Don’t wait on (international) competition. It has already been said before. Constantijn van Oranje also mentioned this when summing up some of the Important aspects he gained knowledge of after a meeting with a select horticultural group. So don’t start throwing tomatoes at me because these are their findings, he told with a smile. But in all seriousness, it would do the industry a lot of good to allow for more feedback from abroad, the Prince noted. “There are, as I have been told, many unwritten rules that are not known to people outside of the industry, making it harder to get involved in the industry for outsiders.” Which is a shame, because in that case, no million-euro companies will rise from the horticultural industry. Something that, according to the Prince, should be the goal. “Why shouldn’t you be allowed to dream big? Isn’t it the goal in a competitive world to be the biggest? It doesn’t have to be that Chinese company right?”

Chairperson of the day Sophie proceeded to throw in a metaphor about African families in an effort to show why innovation is still going slow. That metaphor went right over the heads of Constantijn van Oranje and Simone Keijzer of Gearbox Innovations, who had joined them on the podium. It caused the people in the audience to laugh as well as the people on the podium. After that, they ran out of metaphors (for those of you who are curious now, take a look on the Royal Brinkman website because there you will able to watch the presentations) and it was time to end with a get-together and some drinks. 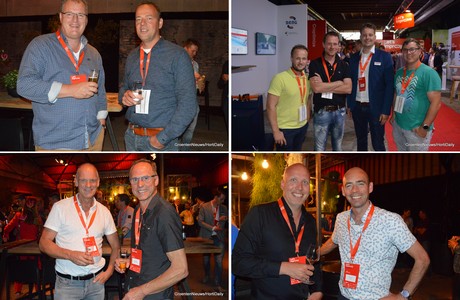 Time for a get-together