"If you assume that you are going to be successful, you've got a chance"

Designing the best greenhouse for medicinal cannabis in Australia

There is no one single best design for the production of medicinal cannabis. That's what Powerplants Australia director Carl van Loon is sure of.

He admits the industry is still figuring out the best growing techniques, but should have a better understanding in the next 5-10 years, in the same way knowledge was gained in the tomato industry. He adds that defining the growing company's purpose will determine best design.

"What's the purpose? That's what you need to answer first," he said. "You really need to know what you are trying to achieve here. Is it just to make some money? If it is just on money; focus on size and get big announcements out there and stir up interest, make some money quick then you can sell licence and get out. But that's not really what we are about. Then there's maximising production at minimum cost. This is actually a difficult thing to achieve; you need to focus on automation, good climate and fertigation control. While quality and consistency, if that's your main goal, and that really what you have got to be looking for in medicinal cannabis; you have to again focus on your climate, fertigation, cultural practices - and you have to get it all right. So, your purpose will define best design for you." 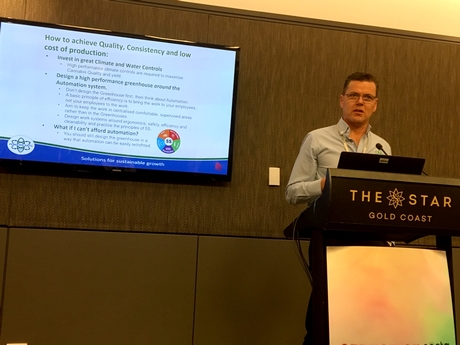 Carl has grown up in the nursery industry, and his company specialises in climate systems, water systems, control systems, automation and labour systems, and recently has brought it all together as the medicinal cannabis industry grows in Australia. Powerplants employ 40 staff and offer services to all parts of the country. 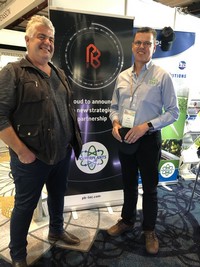 "There is no one system that is accepted as the way to do it," Carl said. "We have got so many types of growers doing so many different things in the United States, that probably in 5-10 years we will know what one system is, just like tomatoes, it's so simple now. Virtually everyone has the same thing, but in different sizes. For this, we haven't figured it out yet. It's pretty exciting to be part of the figuring out process. Basically, if you just want size and increase the share price, go and buy a tomato greenhouse and refit it out; put some blackout screens, dehumidification, lights, fans and other elements and you are away. This is happening a lot in U.S. and Canada, so just taking the same tomato systems will work, and you produce good quality, but labour is massive. In Australia, having plants in fixed positions, I don't think will be viable long term."

Labour costs
The next step, Carl advises is determining what resources companies have available to them. Generally, Australia has high labour costs, low numbers of people wanting to do this type of work and pretty high energy and gas prices - up to four times the price in Northern America, requiring a higher capital investment. Good water and good climate are also important factors.

"Too cold and dark, that's really easy," Carl said. "Hot and dry, that's a little harder, but hot and moist is most difficult. So, there are some places in Australia that are great in terms of climate. You have to choose your site based on a whole variety of things; not just climate, not just availability of staff, not just energy costs - you have to really put them all together and if you are ticking most of the boxes, you're in a good place. You also need flat land. So, don't start with a site with a lot of excavation work needed - you can spend a million dollars very easily." 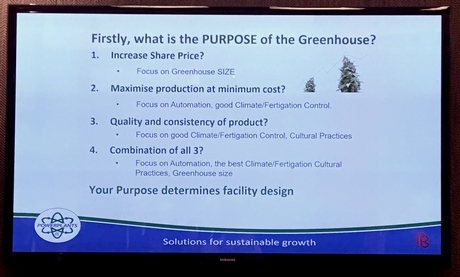 Local support
He also warns that it will require a big initial investment to get started, and that a lot of money can be made from the medicinal cannabis industry, but a lot of money can be lost if systems go down, and there is not the right local support. However, given that it is an emerging industry, the finance side of it usually has to be available from investors, before growers are found, rather than it starting with the growers because of the capital needed up front.

Carl advises companies to capitalise on the automation that available. This includes designing the greenhouse around the system and think about the flow, by bringing the work to a centralised location in an integrated headhouse, using equipment such as mobile ebb and flow benches and plant sorting systems - to also cut down on labour costs.

Start with a headhouse
"If you assume that you are going to be successful, you've got a chance," he explained. "If you start with a headhouse in the corner of the property, and then you build your greenhouse around it, and you have no room to expand - you've locked yourself in. So, you design your greenhouse around your headhouse. Labour is not a big problem in cannabis at the moment, because the industry is profitable, but at some point, it will matter and make up half of your overhead or more. "
But Carl says getting the climate right should be the key factor in the greenhouse development, as it can undo all the hard work in getting all the other aspects together. He adds that automation works the best when it involves the minimum number of different types of plants, as it is all about uniformity rather than growing a massive variety.

It is also important to design for production flow, according to the Powerplants Australia director, in order to minimise contamination from one zone to another.

"Another purpose; high quality, high output and low cost of production - this is where you are combining everything with best hygiene practices." Carl said. "This the "holy grail", getting all of these things in the right order. It's difficult but can lead to the largest and most sustainable returns."