"The difference between growing at a pH of 5.5 and of 6.2 has an enormous impact on a crop”

It’s not the most riveting subject in horticulture but if you don’t pay attention to pH, it can cost you a customer. Every grower knows that pH needs to stay between 5.5-6.5 in hydroponics because certain compounds can only be absorbed by plants at this level.

"Many cannabis growers believe that by adding a significant amount of phosphorus as their plants enter the flowering stage, the plants will produce bigger buds," Carl Silverberg with iUNU explains. "What these growers are really doing is speeding up the life cycle of the plant."

Adding the proper amount of phosphorus to a plant’s diet allows you to manipulate a plant to give you what you want, which is for it to flower longer and fuller, not die sooner. A fuller, long-lasting plant yields more of the Grade A quality buyers seek.

The importance of pH
"Since the impact of a 6.5 pH is ten times greater than a 5.5 pH, if you force a plant to flower with your soil at a pH of 5.5, you end up with leggy stems, smaller flowers and it’s all because the plant is busy in a vegetative state instead of flowering," he further explain. 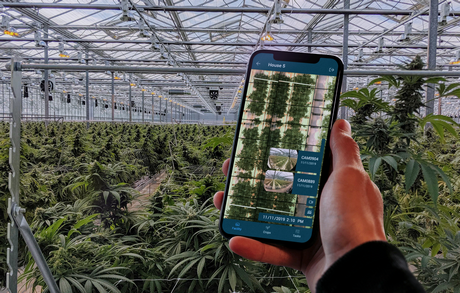 “In our first year of operation, we had a contract grower who was watering at 5.5 pH, and he was adamant about it,” stated Theodore Huggins,  a former grower at both cannabis and horticulture operations. “He even had his own pots and his own soil. He did whatever it took to keep his pH at 5.5. Our head grower begged him to push up his pH. He wouldn’t listen to a thing we said.”

"What’s sad is that it wasn’t his growing style that was off, his labor style or his cultivation style that caused his bad crop. It was literally because of his pH," Huggins says. “If he had a LUNA type system proving to him that he needed to change his style, I know he would have produced the quality we needed. He wasn’t a bad grower, he just didn’t have the right data.”

Relying on data
The difference between growing cannabis at 5.5 and 6.2 has an enormous impact on a crop. The profit and the quality change so much, so drastically, by just changing such a small thing as pH. Absent a reliable greenhouse system, the grower was just depending on his intuition and in a data-driven environment, that wasn’t enough.

"In the end, by insisting on his 5.5 pH despite advice from other professionals, the grower lost a client who was willing to buy 600 pounds of cannabis. The company lost money because they didn’t have the crop they promised to their buyers. They ended up selling the cannabis not at a Grade A level but a Grade C level; for the much lower price that extracts and oils command."

“It’s a shame because the difference between growing cannabis at 5.5 and 6.2 has an enormous impact on a crop,” Theodore points out. “The profit and the quality change so much, so drastically, by just changing such a small thing as pH.”