Scott Reach with Rare Dankness during the ACT Summit

"As we go forward with breeding, you have to ask yourself what your intention is"

“You don’t have to breed just to produce seeds. If you breed, you must have specific reasons such as genetics keeping, or to improve a specific aspect of the plant,” says Scott Reach with Rare Dankness, during his talk at the ACT summit in Las Vegas, last December. The world of cannabis breeding is still pretty much in its infancy, for the same reason that prevented research on cannabis in general to advance: the illegal status of the plant until a couple of years ago. As the industry emerged from the underground, many higher education institutions kicked off research programs in order to better understand the inner secrets of such a plant. Other than universities and research institutes, also other experts are trying to shed more light on the properties of cannabis, and Scott has always been one of them. “When I first started, I was told that making seeds would be a waste of time, and that I couldn’t make anything good out of that,” says he. “But that was just a demonstration of a wrong mentality: if you breed seeds, you have to do it because you want to preserve a specific genetic, or you want to improve one or more terpenes or cannabinoids. Breeding seeds for the mere sake of it is indeed not very useful, and it might be difficult to get something out of that.”

The intention is important
According to him, you have to ask yourself what your intention is. “For me, making new varieties is my bread and butter,” he says. “I have been breeding and collecting seeds for more than 20 years now.” Scott explains that he is constantly looking at very old clones affected by diseases. “We’re trying to get these 20 plus years old clones and bring them back to an initial stage through tissue culture, for instance. This is to explain that there are a lot of benefits from making seeds and clones that go beyond the mere making seeds. There are so many genetics that have been lost because of a number of reasons.” 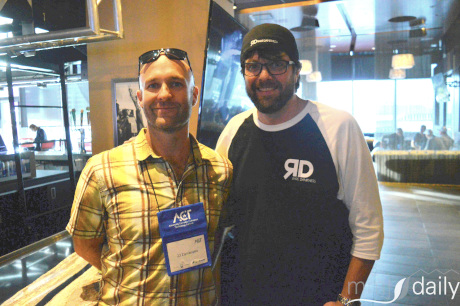 From the left: JJ Zambrano with Verdant Construction and Scott Reach with Rare Dankness

Hermaphroditism
Then, Scott touches upon the subject of feminized seeds. “Dutch Passion was the first company that came up with feminized cannabis seeds. They did it through the creation of hermaphrodite plants which eventually would become female. But how is this translated into their offspring?”

Hermaphroditism is a condition that cannabis plants can develop if they are subject to conditions which are still to be fully understood. “For instance, we have seen that a lot of hermaphroditism is caused by a lack of light on the plant, which gets too stressed, leading to development of this condition.”

Only the best plants
Therefore, Scott wants to look at what are the best plants that are the most indicated to create strong and healthy genetics. “We select the most robust, the hardiest plant and then we reverse that in order to make feminized seeds. You really need to let the plant speak to you. But this is only part of the equation, as you need to select that offspring that is in tune with your equipment and your grow strategies and conditions.”

That is why Scott is starting to look at plants in terms of issues with pathologies, thus selecting the best in terms of resiliency and hardiness. “The point is to ensure that a specific variety grows healthily, without experiencing problems that can lead to a wasted crop.”

Ultimately, Scott points out that it is all about being passionate about the plant. “At the end of the day, it all comes down to passion,” says he. “I am just a cog in this giant machine that the cannabis industry is. There are many guys who are passionate about preserving genetics. I always wanted to make sure that the genetics that I make and that I like are preserved. For the last three years, I could rely on an awesome group of growers who are an integral part of our selection process, whether it be the hardiness of the plant, the ease of growing, the flavor, and all of that.”