Cannabis breeding as a function of commercial production

The purpose of this report is to discuss the relevance and logistics of incorporating a plant breeding program into a commercial-scale cannabis production facility.

History
Modern cannabis breeding is in its infancy. As a result of the dispersed and clandestine nature of recent historical cultivation, and the ease with which cannabis can be clonally propagated, the majority of commercial production in Canada is the result of outstanding cultivars selected from many thousands of random pollination events. 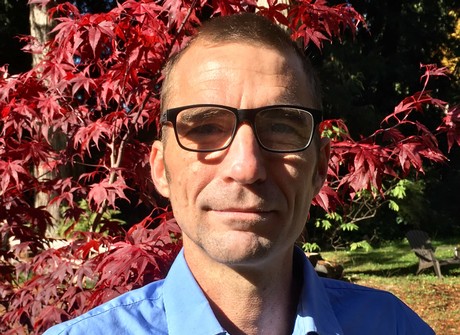 There have been periods when the political environment has allowed for large-scale cannabis cultivation to occur in various locales. Beginning in the Netherlands in the 1980's, and later in Switzerland, California, and Spain, the liberalization of cannabis cultivation laws resulted in a proliferation of multi-year breeding programs. Most of the foundational varietals that comprise the modern cannabis gene pool were developed during these periods.

Relevance
It is most feasible to breed plants at a commercial cultivation facility, where accurate records can be kept over multiple years, and where target plants can be selected from large populations. It also becomes increasingly necessary for cultivators to implement a comprehensive breeding program as the scale of production grows.

Pathogen pressures are significantly elevated when thousands of plants are mono-cropped in crowded proximity. It is challenging to economically manage the climate in large-scale mixed-light facilities as compared to indoor growth chambers. Most cultivars that have current market acceptance were selected in indoor environments, and many are unsuitable for cultivation in greenhouse or field conditions. The use of an inappropriate cultivar in an environment with elevated pathogen pressure often results in crop loss. Successful cultivators understand that pathogen-resistant cultivars are a core component of a holistic integrated pest management (IPM) program.

Mechanics
In order for producers to better understand the logistical impact of implementing a breeding program at their facility, a brief overview of the mechanics of cannabis breeding is in order. 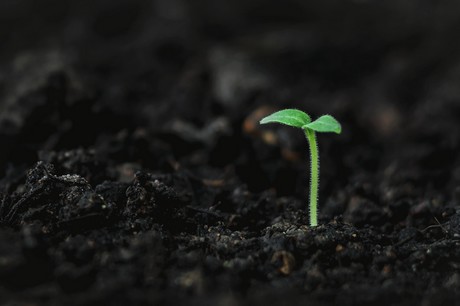 Cannabis is most often dioecious, with distinct male and female plants. Under normal conditions, it is therefore an out-crosser rather than a self-pollinator. Due to outcrossing, and genetic recombination at each generation, cannabis is a highly plastic plant, and can quickly adapt to various environmental conditions. A varietal is a group of closely related plants, which breed true to type for many important traits (often referred to as a strain in cannacultural parlance) A cultivar usually refers to an individual plant, or hybrid variety that has horticultural utility, but is not ncessarily true breeding (i.e., it does not always pass down relevant phenotypic traits).

Line Breeding
Traditional horticultural practice involves selecting seeds from the most desirable plants at each harvest, and planting those seeds the following year. In effect, the female is selected for in each generation, and has been pollinated by random males. In this scenario human selection pressure is of low intensity, and a high degree of genetic diversity is perpetuated. This is a very effective way to breed resistant, productive varietals over a period of millennia.

For those of us with shorter time horizons, more intensive techniques are required to stabilize and intensify the relevant traits of a commercial varietal. Self-pollinating plants is the most intensive form of inbreeding. Selfing a cannabis plant involves treating a female cultivar with STS or GA3 (ethylene blockers). This treatment will cause the female plant to produce pollen, which is then harvested, and used to pollinate an untreated female clone of the same cultivar. The resultant seeds will be female, as the Y chromosome is not present, and closely related to the cultivar that produced them. 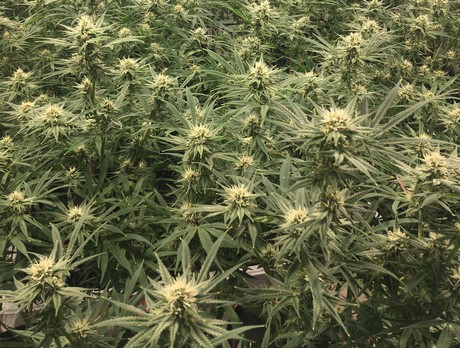 The drawback to line breeding for stability when selecting for production cultivars is that, as a varietal becomes more uniform through inbreeding, it becomes less heterotic (vigorous). This effect is referred to as inbreeding depression. The most efficient way to intensively inbreed a plant, while retaining a degree of genetic diversity in the population is through a generation of selfing target plants, followed by a generation of open pollinating target plants. This type of recurrent selection has been characterized as the most statistically efficient form of inbreeding (Allard, Robert W. Principles of Plant Breeding. Wiley 2010)

The elimination of the Y chromosome from the breeding population has additional benefits beyond the ability to self-pollinate plants. Although production of feminized seeds is labour-intensive, there are significant labour, and facility cost savings due to the fact that male plants do not need to be sifted from the populations. All target plants can be assessed on the basis of floral characteristics rather than making male selections based on other criteria.

Hybridization
Due to the deleterious effects of inbreeding depression on crop yields, ideal production cultivars are hybrids of two or more stabilized true-breeding strains. This first hybrid generation is known as an F1 generation. This F1 generation will often outperform either parent varietal while retaining some degree of phenotypic consistency. In some cases, due to genetic compatibilities, this outperformance will be dramatic. Varietals that exhibit dramatic phenotypic improvements in the F1 generation are referred to as having specific combining ability.

Photoperiod Considerations
Cannabis sativa and C. indica are obligate short-day plants, meaning that they will not flower until the skotoperiod (dark period) exceeds a critical threshold. C. ruderalis, which evolved near our Canadian latitudes are day neutral populations that will initiate floral production, regardless of photoperiod, once they have reached maturity. Breeders have successfully ingressed the day-neutral function by hybridizing C. ruderalis with drug varietals for several generations. The resultant vaarietals are referred to as autoflowering strains. 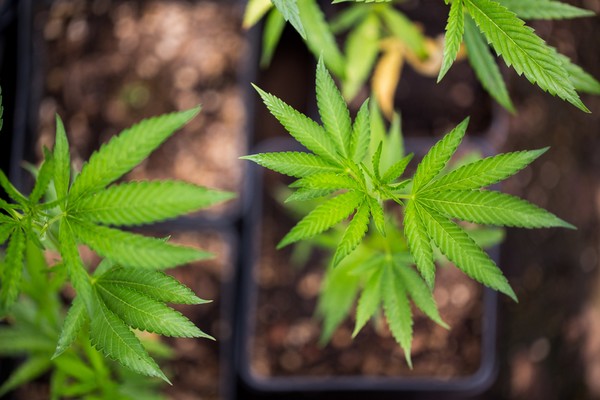 Photoperiodism is an important trait for cannabis production in controlled environments. This trait enables cultivators to initiate flowering at the optimal time for canopy management through the use of mechanical blackout systems or light cycle manipulation. For field production, autoflowering strains will likely comprise the most cost-effective crops produced in Canada. This is due to the fact that they can be timed to flower outdoors during the optimal production window, without the need for light deprivation infrastructure. These crops will likely be mechanically harvested for the extract market.

Autoflowering strains
Breeding and propagating autoflowering strains differs from the production of photoperiod plants in several key areas. Autoflowers cannot be efficiently propagated clonally, and mother plants cannot be kept. Thousands of plants need to be germinated from seed each season, so feminized seeds are required. Target plants must be identified early in the growing cycle through mass selection techniques, and then pollinated. The final selection of parent plants occurs post harvest, when qualities can be evaluated. Each season, 2 to 3% of the crop needs to be selectively pollinated to produce seed for the following year.

Baseline breeding goals
An intermediate goal of a production-based
breeding program is to develop a library of stabilized inbred varietals in seed form. Selected cultivars of these varietals are kept as live plants. These plants will have been progeny tested, and are proven parents of F1 hybrids with specific combining ability. This F1 generation can be used directly for production stock, and outstanding cultivars can be sifted from large populations to be clonally propagated. 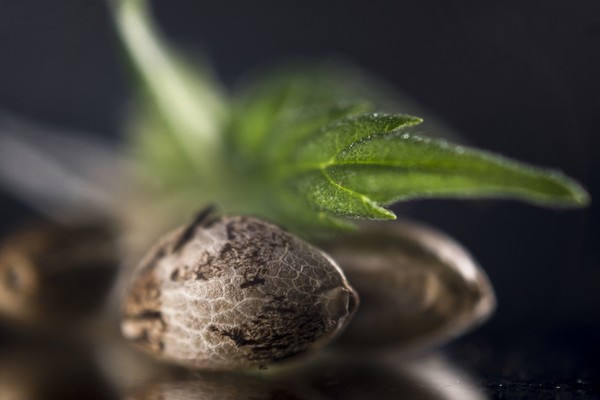 Provided that a diversity of varietals are available at the inception of a breeding project, it will require at least two to three years of intensive breeding to reach this baseline, with multiple F1 cultivars in production. When a new pest pressure emerges, or some other trait needs to be modified, it is sometimes possible to breed for resistance in the inbred parental lines and then re-create the F1 hybrid so as to restore vigour, while retaining the ingressed trait.

Conclusions
Over the next few years, cannabis breeding programs will be integral to the culture of successful large-scale cultivators. Ideally, every worker who touches a seed plant will have the agency to flag it for further inspection as a potential target plant. The IPM specialist will be in communication with the breeder, and their functions will be synergistic. The marketing team will coordinate with the breeder to communicate market preference trends, and to evaluate emergent phenotypes.

Many smaller producers, particularly those with indoor facilities, will continue to grow heritage cultivars, or will source their germplasm from others.

The legalization of cannabis production in Canada, and the resultant inflows of capital, is a transformational event that will necessarily, and inevitably result in a rapid improvement of production cannabis chemotypes. Producers who recognize and embrace this reality will be well positioned to benefit.