Choosing between LED and HPS

Background
HPS bulbs create light by sending electricity back and forth through an “arc tube”. An external ballast (a device that regulates the current to the lamp) is needed to provide voltage for a “starting pulse”. The starting pulse initiates a flow of electrons within the arc tube – producing a faint glow of light and heat. The heat vaporizes liquid mercury and sodium into gases. The gases enter the arc stream, constricting the arc, which generates more heat and light. At this point, the HPS bulb will emit a very bright orange/yellow spectrum.

HPS
HPS lights have been around for a while and therefore are trusted by many growers. Their upfront cost is considerably lower than LED lights, making them favorable for growers with limited budgets. While you cannot customize the spectrum of HPS lights, they are capable of producing a huge quantity of light – which is beneficial for the flowering stage of plant growth. Unfortunately, the high intensity of light from an HPS lamp generates a lot of heat. This can be a plus in some northern climates, but in many cases, a greenhouse equipped with HPS lights requires a lot of additional cooling, potentially increasing operational costs. Additionally, HPS lights have limited dimming capabilities, which limits control over light intensity.

LED
LED grow lights have increased in popularity with advancements in LED technology. Many growers favor LED lights because they require significantly less energy to run while producing equivalent yields to HPS lights. They also don’t radiate nearly as much heat as HPS lights which means your HVAC system can be downsized, lowering your energy costs. Though they cost considerably more upfront, LEDs save growers considerably on operational costs.

Additionally, LEDs can generate a more suitable light spectrum than HPS. As shown in the graph below, HPS is limited by the gas (sodium) that can emit mostly in the yellow/red region (550 to 620nm). LEDs are more flexible and manufactured with an ability to emit more Blue (400-500nm) which is highly valuable for both photosynthesis and photomorphogenesis. 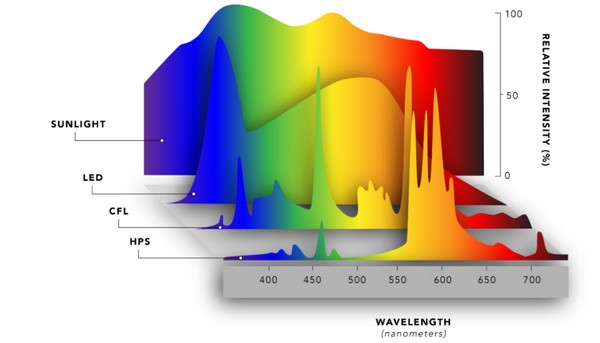 Growers can mix and match LED colors depending on what they’re growing or their crop’s growth stage. LEDs also have a dimming capability of 0-100%, allowing for full control of light intensity. Dimming and spectrum tailoring capabilities also allow the grower to try different intensity combinations of colored LEDs depending on growth stages. Therefore, growers have the option to shape their plants in a certain manner to suit their environment.

Spectral Distribution
One thing to consider for LEDs and HPS in greenhouses is the type of fixture. HPS lights are limited by the nature of their technology because you need to have a wide reflector to make this technology efficient. Otherwise, most of the energy that you spend on getting photons in your canopy would disperse in space and be wasted.

LEDs are more directional than HPS, therefore the photons produced are going straight to your canopy. This can be a downside of the LEDs as well. It requires proper professional advice and sizing to make sure your canopy will have a uniform repartition of the light intensity, so as not to neglect some parts of your canopy. Luckily, most LED Manufacturers understand the importance of shading in a greenhouse environment. You can find some “bar-fixtures” that fit under the trusses or your structure minimizing the shade.

You want to strive for a uniform light level from your artificial lights. HPS lights will induce more shade, especially because they need wide reflectors.