“Look at most glass through a microscope; it actually looks mountainous and jagged despite appearing smooth to the naked eye,” according to Michiel van Spronsen of Glascom Tuinbouw. Etched glass, such as Glascom’s SmartGlass, is polished and very smooth, providing multiple benefits to the grower. 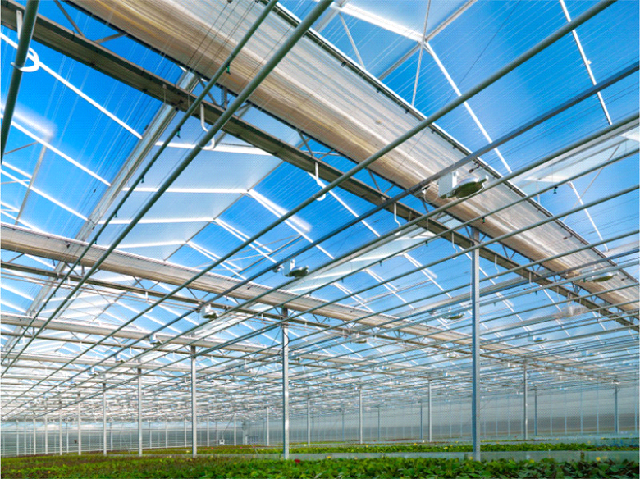 Adaptive haze
SmartGlass is a diffuse floatglass touted for its increased smoothness, strength, distribution and diffusion of light, and its “adaptive haze”. Whereas condensation typically results in higher haze and less light transmission, Michiel explains that “SmartGlass effectively reduces haze when wet and increases hemispheric light transmission. This is especially important during the winter, when light levels are lower and the glass is almost always wet”. SmartGlass is also unique in that its surface is etched and hydrophilic, making it ultrasmooth and ensuring that condensation or rainwater forms a film rather than droplets. “Water droplets on glass can cost growers up to 6% of incoming light whereas a water film saves 1- 2% of such light,” according to Michiel, SmartGlass allows growers to maximize natural light conditions in a greenhouse. As a rule of thumb in greenhouse vegetable production, an additional 1% of light can effectively improve yields by 1%, making SmartGlass’ increased light transmission an investment that pays for itself.

Furthermore, the glass’ fine structure prevents dirt and other particulates from adhering to the glass, thus keeping the glass clean. This is also made easier by the fact that water forms a film, allowing it to carry any dirt and contaminants with it as it runs off to the gutters. And so while Glascom wouldn’t consider SmartGlass to be self-cleaning, it has self-cleaning properties.

Comparing to tempered glass
SmartGlass has been installed in greenhouses across the world, including Europe, Canada, Japan, Australia, India and United States. The strongest evidence of SmartGlass’ value, according to Michiel, is when clients compare the innovative glass with other producers and assure them that SmartGlass’ light-saving and ultrasmooth properties render it worth the investment, which is somewhat higher than the cost of lower quality, tempered glass. SmartGlass has proven effective in large-scale operations, with a 13-ha installation at N. Sawatzky Farms in southern Ontario having reportedly increased bell pepper yields by approximately 5%, according to the assistant grower.

The installation, completed in two phases over the course of five years, was conducted by Thermo Energy Solutions, a company specializing in greenhouse installations and continuously promoting agricultural innovation, including SmartGlass. “We want to provide customers with the full spectrum, from structure and heating to the civil engineering and the packing house with equipment. All the customer has to do is order and plant the young plants,” said Henry Froese, general manager of Thermo Energy Solutions .