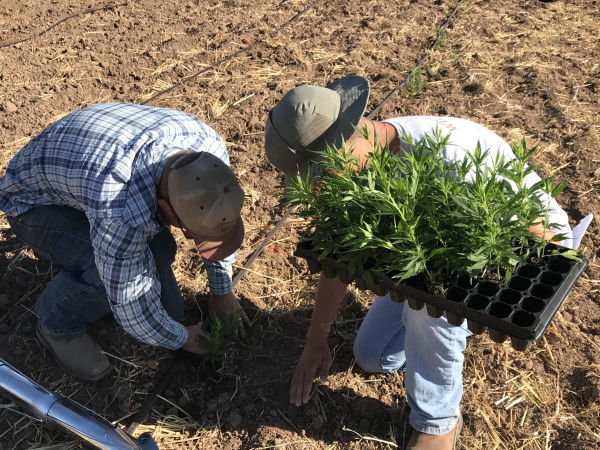 Multiple varieties of hemp transplants and seeds went into the ground for the first variety trial in San Angelo in late spring. (Texas A&M AgriLife photo by Susan Himes)

The first AgriLife Extension trials were underway by late spring, when a selection of hemp seeds and transplants went into the ground at the trial plots in Tom Green County.

AgriLife Extension’s goal is to provide independent scientific assessment of hemp varietal performance in Texas for farmers, seed companies and the hemp industry. The trials are conducted under the Texas A&M AgriLife Crop Testing Program, a self-supporting program that offers public variety trials for crops.

A little over three months after planting, a small group of potential producers, agents and specialists were invited to the first tour of the San Angelo trial plots.

“In a state as large as Texas, where you have potential producers farming in a wide variety of conditions, it’s important for us to test different varieties across the state,” said Noland. “Ultimately, our specialists and county agents will be faced with hemp crop questions from stakeholders. The sooner we have those answers and a better understanding of how this crop performs in Texas, the better off we’ll be to assist farmers.”

The fee-based variety testing program for hemp being conducted in Plainview and San Angelo are irrigated plots, unlike some other trials, which will be rainfed. 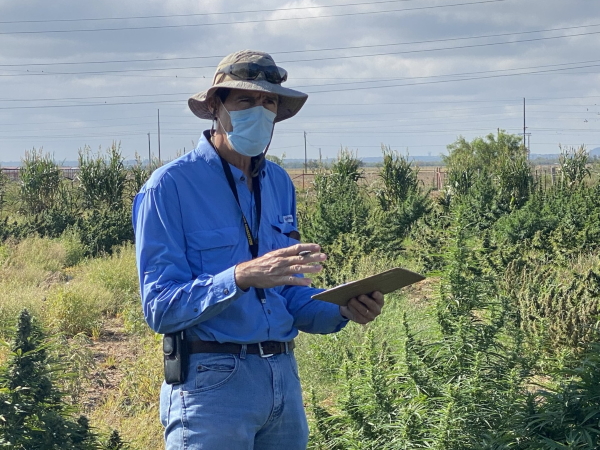 “We received a few light rain events after planting as well as a light hail event, but these plots have primarily been irrigated with 1 inch a week throughout the growing season,” said Noland.

Calvin Trostle, Ph.D., AgriLife Extension agronomist and statewide hemp specialist, Lubbock, was also on hand to provide his insight and expertise. Trostle said he was impressed with the growth of several hemp varieties in San Angelo and told attendees that he thought they were among the top 10-20% he is aware of in the state so far.

Some seeds and transplants, which had been less than 6 inches tall when planted in June, were over 5 feet tall by the time of the tour.

“Earlier planting will capture more long days and result in more vegetative growth,” Noland explained. “Hemp flowers in response to shorter day length and switches over to reproductive growth. So, the size of the plant will be determined not just by the variety and environmental conditions, but when in the season it is planted. This affects the proportion of vegetative versus reproductive growth at harvest.” 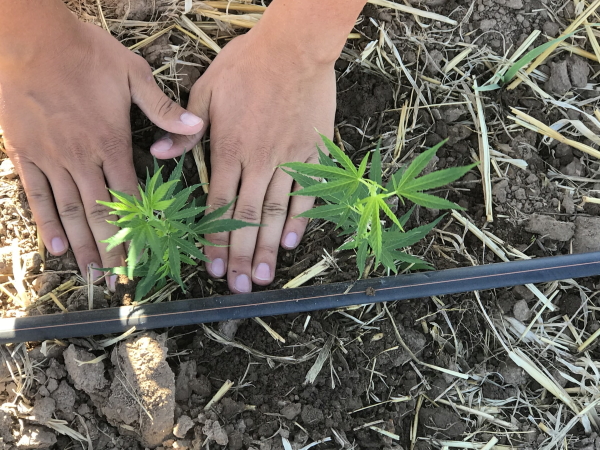 These were the standard size of the hemp transplants in June when the trial started. (Texas A&M AgriLife photo by Susan Himes)

The Hemp Farming Act states that: “hemp” means the plant Cannabis sativa L. and any part of that plant, including the seeds of the plant and all derivatives, extracts, cannabinoids, isomers, acids, salts, and salts of isomers, whether growing or not, with a delta-9 tetrahydrocannabinol concentration, or THC, of not more than 0.3 percent on a dry weight basis.

“That less than 0.3% is key to ensuring what producers grow in Texas is legal,” explained Noland. “If preharvest samples test higher than that, the crop must be destroyed.” 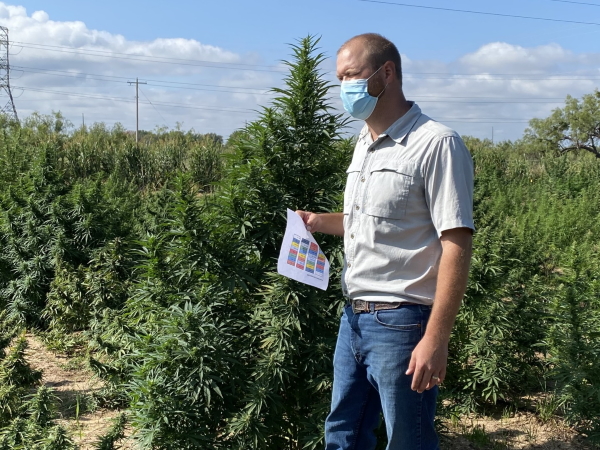 Reagan Noland, Ph.D., stands next a large hemp plant in the trial – dubbed “the Christmas tree” due to its shape and size. (Texas A&M AgriLife photo by Susan Himes)

No one may grow hemp in Texas without a license, a process requiring a background check and third-party crop testing to validate THC levels. The TDA representative at the tour explained that a minimum of five plants are randomly selected for testing and their average THC level must fall below that 0.3% threshold to be legal in Texas.

All the plants in the AgriLife Extension hemp trials are CBD varieties, which are designed to be compliant with the low THC levels and will be tested throughout the trial process.

When ready, variety trial results will be published. Trostle also encouraged  first-year growers in Texas to fill out the AgriLife survey.

“This will help provide Reagan, I, others feedback on the initial Texas crop and identify areas for education and research,” Trostle said.