Growing semi-closed without a hose under your crop

With the recently presented Atrium Climatune climate system, semi-closed greenhouses no longer need the well-known hose under the crop. The system, using pulsating atmospheric pressure to achieve a diffuse distribution of the air, can also be used in traditional greenhouses to achieve more control over the crop, Koen Brabander with PB tec explains. The collaboration Atrium Agri, in what PB tec participates, recently announced to have acquired the exclusive rights for the system in the horticultural industry. 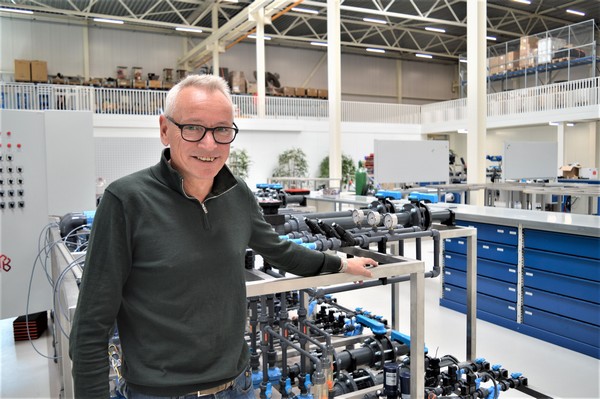 "Secret"
Outside of horticulture BaOpt, the name of the system behind the Atrium Climatune, has already been successful in various "difficult" areas, such as airports and swimming pools. The system is controlled by artificial intelligence. Based on the actual measured values, the climate control is continuously adjusted.

"The real difference lies in a 'little secret', a control that ensures, through pulsating atmospheric pressure in the room, that the molecules move easily in all directions," reveals Koen. "Normally, in a greenhouse with a lot of multilayers in it, you would get differences in RH, CO2 and temperature everywhere because plants give off moisture and heat. With the BaOpt system, you can achieve a temperature difference of plus or minus one degree, from ceiling to floor and from gable to gable. This also applies to such small differences in RH and CO2."

Hoseless growing
The system has already been tested seven years ago at Dutch tomato grower Royal Pride, now Atrium Agri is going to test the system at another well-known nursery. The aim of the trial is to demonstrate that growers no longer need a hose under the growing gutters, while the climate is still perfectly regulated. "The hose is no longer needed, and you don't really need the pipe rail systems to dry the crop. 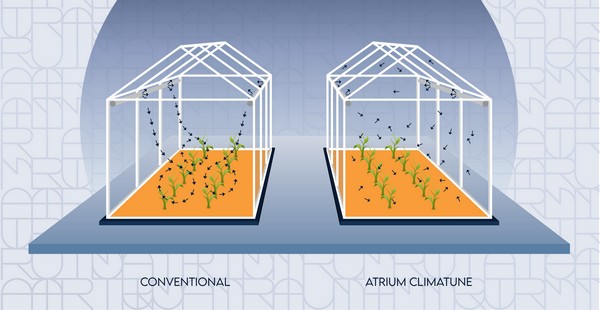 Swiss Alps
The idea for the BaOpt system originated in Switzerland. The inventor, Albert Bauer (hence the name, Bauer Optimisation = BaOpt), saw in the mountains that at a certain negative pressure, the air becomes almost diffuse the higher you go. "That climate, where the air moves easily in all directions, is what they are trying to imitate in the system."

Koen explains what this means in the greenhouse: "By introducing pulsating atmospheric pressure, you manage to make the molecules move up, down, sideways and forwards just as easily. They have been using this principle in commercial buildings for around 15 to 20 years, especially in difficult areas, for example with very high ceilings." 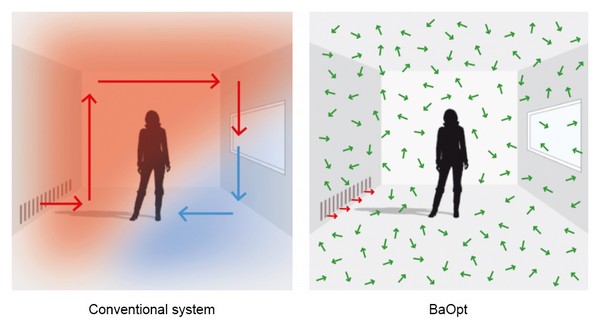 So why hasn't this principle been used in horticulture before? "If you start looking for more information about the system, you always see the scientists crying and the users laughing. It seems almost impossible to do what they are doing: using a small adjustment in the software to ensure that the air moves evenly in all directions." It is difficult to explain scientifically, but the users invariably see measurable results.

No wonder large companies are looking at it with interest. Bosch, for example, became co-owner of BaOpt at one point, and several large companies have tried to imitate the system, so far without success.

Opportunities
Koen himself was a little hesitant at first, also because the system could be a competitor to regular partners Priva, Ridder and Hoogendoorn. "But on the other hand, it is a separate module. Initially I didn't really appreciate the value of the system in a traditional greenhouse. But now that more and more semi-closed greenhouses are being built with air treatment systems, the Atrium Climatune system does come into the picture.

Koen sees opportunities especially in indoor growing systems. "We have several customers who do multilayer. They have already done a lot of research into how you achieve an optimum climate. Often the solution is sought in many fans, air hoses and sensors, and even then the equal RH and temperature distribution is a huge challenge. In Atrium Climatune, we see a system that can regulate the climate effectively without having to hang the whole thing up."

Future
So there are plenty of possibilities, and at PB tec they see opportunities for the future. "For example, imagine that we offer the entire Atrium Climatune system separately, as a module within an existing climate computer from Priva, Ridder or Hoogendoorn. Then the knowledge of these companies, built up over 50 years of control in greenhouses with constantly changing conditions, would be retained, and we would only add an option.

For now, the system will be piloted at a well-known grower with a traditional greenhouse. "But we will make it semi-closed for the test. We want to demonstrate that we can achieve a better climate with fewer sensors, and also that we can make the control autonomous, with remote updates."

You are then left with a greenhouse without cooling, with only heating. "That way, you realise both energy savings and better climate control. The energy savings, incidentally, only apply in winter, because in summer every grower in the Netherlands without cooling throws open his vents, so then the Atrium Climatune system has no added value, because we cannot achieve pulsating underpressure. In September/October, the trial will go on air."