"Even as a 'small' business, we sell a great product from a major player"

Anyone paying attention at HortiContact 2020 would have seen a Danish trolley fully fitted with LED lighting. It was at Agro-LED's stand. This Dutch company has been selling similar systems like hotcakes ever since. "It's an easy way for growers to do multilayer cultivation. Overseas and in customized racks too."

So say Mark van der Ende and Roy Visser. They are the driving forces behind the company. It works closely with a major Italian lighting company, C-LED. "As a 'small' business, we sell products from a major player. That's what C-LED is," says Mark. "I was greatly impressed during my last visit to their factory. It's in Europe. So our special LED multilayer cultivation lighting solution is a truly European product," adds Roy. 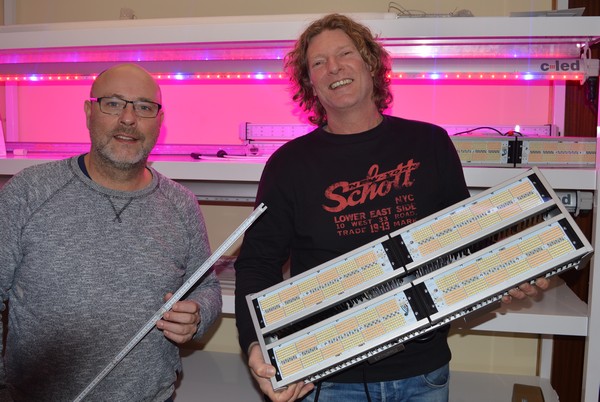 Mark, on the left, holding a Slim LED lighting system, and Roy a 'double' Combo.

Easier to transport
Those who were even more attentive at the trade show realized the word 'tube' was missing from the company name, Agro-LED. There is a reason for that. "We introduced the Slim system as a successor to our well-known glass tubes. That name, therefore, no longer fit us. We still offer both systems, but the Slim system has some advantages in the current market," explains Mark.

There is a noticeable lack of glass and more plastic in the Slim system. "The light transmission is still high. Plastic is, however, less fragile than glass. That makes it easier to transport, and especially export. That happens a lot. We participate well in turnkey projects. We deliver everything plug & play for those if desired. The trolleys are then fully installed and pre-tested. It's just the plug that needs to be placed on-site." 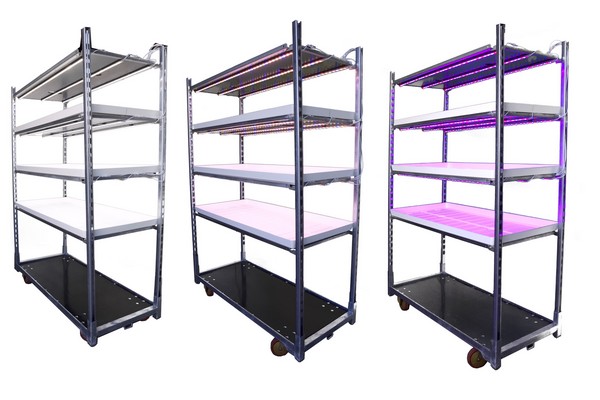 Spectrum
The spectra are more clearly visible. "This latest system has three: a natural indoor, a purple indoor, and a cool white spectrum. Growers can choose from these, depending on their wishes and situation. Regardless of the spectrum choice, the output remains the same - 50 PPFD per module," Mark continues.

So, the more modules per layer, the brighter the light? "Exactly. On average, growers opt for two to three modules per layer. That has an average consumption per module ranging from 17 to 23 watts. That depends on the spectrum." 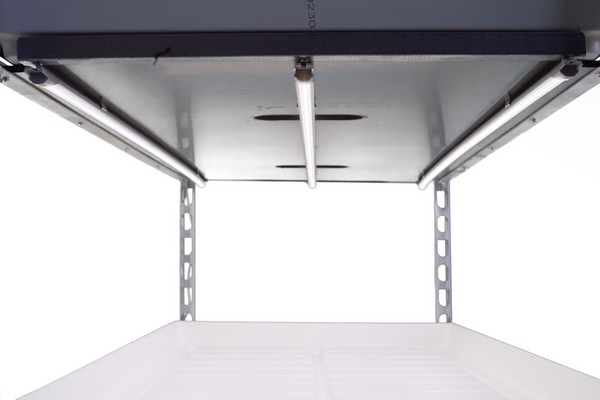 The Slim system with a cool white spectrum.

Advice
Agro-LED advises growers in their choice. That includes things like the distance of the crop to the fixtures. "Many growers choose to use our lighting to grow, for instance, cuttings," adds Roy. "They do so in Danish trolleys or fixed racks. We recommend always keeping about 30cm, a line length, between the crop's top and the lamp's bottom. Though, it usually does no harm if the crop is closer. Plants stoma only open far in a spectrum with a lot of far-red, far-reaching light. You have to consider that," he concludes. 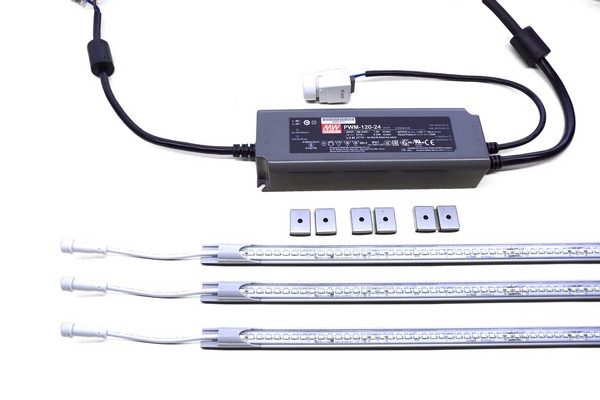 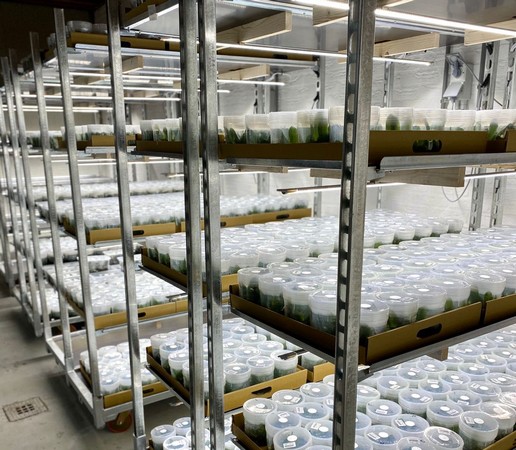