The rapid development of the medicinal cannabis industry requires companies that continuously innovate their products and continuously acquire knowledge on crop cultivation such as Grodan and Fluence by OSRAM. Therefore, a scientific study has been conducted together with Cultivators to acquire further insights on how stone wool substrates and lighting recipes could be improved upon to optimize the propagation of medicinal cannabis.

Cannabis rooting trials
The applied cultivation system depends on the end-use of the plant. As cultivation systems are influenced by the value of the product, so is the approach to plant propagation. Greenhouse and indoor-grown cannabis is treated as a horticultural crop and is mostly propagated through stem cuttings. Homogenous crop growth is of critical importance in cannabis, as irregular growth could reduce yield and inflorescence quality. Differences in rooting never allow for a homogenous crop as small, rooted plants absorb less water and nutrients, resulting in lower growth rates. Competition for light due to differences in size will further affect growth rates, resulting in larger differences within the crop.

Research has mostly been dedicated to optimizing the flowering phase of cannabis, neglecting propagation. From April to September 2021 Cultivators, Grodan, and Fluence by OSRAM partnered to conduct important research at Wageningen University & Research. The rooting trials were structured as three separate experiments, carried out in greenhouse compartments (Fig. 1). 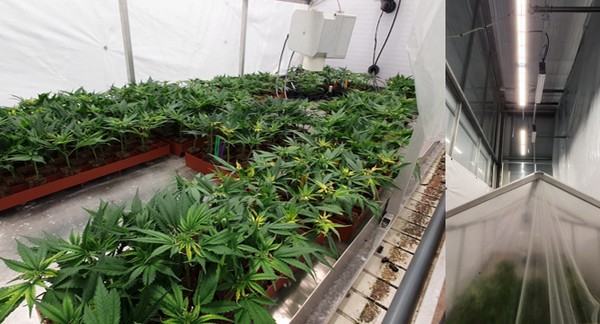 What are the effect of leaf area and cutting tray density on adventitious rooting and growth?
Water stress is prevented by rooting stem cuttings in a high humidity environment and reducing leaf area, both decreasing transpiration rates. However, leaves act as a source of assimilates, which are important for successful rooting. Costa et al. 2002 have shown that the leaf area of rose-cuttings can be a good indicator of the growth potential. Within their study, the size of the root system was proportionally related to the initial leaf area of the stem cuttings. As such, increased leaf area and leaf number might result in more successful adventitious rooting in cuttings. However, reducing leaf number allows for higher cutting densities to increase production efficiencies per unit of ground area. Varying density within the nursery trays has shown to affect the microclimate, and subsequently the morphology of the cuttings, resulting in more elongated cuttings with a lower leaf area when cuttings were placed at a higher density.

Alternatives to synthetic rooting supplements?
In various crops, auxins have the strongest influence on plant processes such as adventitious root formation and stem growth. In some countries, the use of synthetic auxins is prohibited showing the need for alternative rooting supplements. Hydrogen peroxide (H2O2) is a messenger in the initiation and development of adventitious roots and could play an important role in the formation of lateral roots in various crops. For this trial, different rooting supplements have been tested as potential replacements of synthetic auxins such as Clonex and Rhizopon. Rooting has shown to be promoted in Clonex and H2O2 and shows to be potentially interesting. Meanwhile, aloe vera powder possesses salicylic acid, auxins, and gibberellins which might promote rooting. However, in this trial rooting was not promoted.

Additionally, the harvest time of cuttings has shown to affect rooting ability significantly. This stresses the importance of maintaining mother plants under a stable climate and crop training techniques. It is hypothesized that maintaining mother plants with unstable conditions might result in variations in endogenous hormone and sugar levels, which subsequently could affect rooting ability.

Fluence by OSRAM and Cultivators are preparing to conduct a second round of rooting trials in 2022 to optimize cannabis propagation. Based on these findings further conclusions can be drawn from the 2021 trials.