Last year Horconex announced its European ambitions. The Dutch-French greenhouse builder and installer will serve customers in more European countries. The completion in 2021 of yet another phase 3 for a tomato grower in the Czech Republic is a good example of this, as is the realization of a breeding greenhouse for ball chrysanthemums in Belgium.

In Poeldijk, at the head office, one thing is never overlooked. "Over the past 35 years, we have grown so large in France and Switzerland thanks to that focus, and that will continue to be the case, even now that we are active in more European countries," emphasizes commercial director Vincent Kuijvenhoven.

Since 1 January 2021, he and operational director Xander van der Wilk and financial director Jeroen Heemskerk have formed a three-man board with ambition. A growth ambition, which is partly made possible by the new premises moved into in 2020. "When Cees van Uffelen decided to construct this building, he already knew that it was important to keep growing in order to remain healthy as a company. The precise details of those plans were not quite clear at the time. Now they are. We are doing it under our own steam and in steps. The extra physical space we now have available will help us to realize our ambitions."

The Management Board with, from left to right, Vincent Kuijvenhoven, Xander van der Wilk and Jeroen Heemskerk

New home markets
Initially, Horconex will focus on Germany and Austria. Both countries were added as 'home markets' last year, thanks to the appointment of sales manager Markus Balan. "His appointment and his excellent network there are already bearing fruit. We hope to have a series of great projects in these countries soon." From there, Horconex would then also like to open a local branch in Germany, as it has in France. "It is certainly our intention to establish a local branch there, but first we want to do a number of projects. It is important for us not to be a 'one-hit wonder' in the countries we target."

Growers often receive a bicycle as a thank-you gift for their projects. This has already led to some comical scenes, as the back pedal brake is relatively unknown abroad. "Everyone stayed in one piece, though", Vincent laughs.

Installer
When the European growth ambition was announced, those in Poeldijk were asked by their French colleagues what could still actually be done in the Netherlands. Horconex had never really been active there. "We often asked them that question about France, so logically we got the ball bouncing back. Here in the Netherlands, we mainly see opportunities for screening and heating. We have been active in both branches for years, but never in the foreground. We want to change that by participating in HortiContact, among other things. We see that there is still room here for a good installer, especially for heating. Good staff is scarce here. We have a good, young team to take on such jobs." 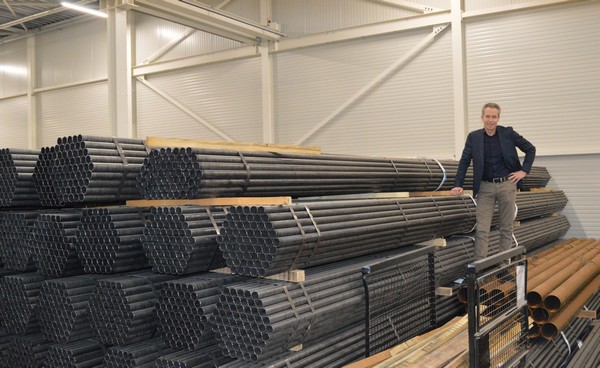 When raw material prices started to rise, the Horconex management decided after careful consideration to act quickly and stock up on heating pipes. "That felt right at the time and still does now."

Continued
The fact that Horconex is going to build in more European countries does not mean that it has not already done so. Vincent recalls Finland, projects in the United Kingdom, including a heating project last year, and other Eastern European countries besides the Czech Republic. "That country crossed our path once thanks to a project there. In the past, we have often done something outside France and Switzerland in this way. Now we want to do it more and not just as a one-off, but permanently." So starting in Germany and Austria. "But in time, for example, also further into Eastern Europe, where we are already well known in the Czech Republic and Slovakia with several greenhouses. You could say that here, outside the French-speaking countries, we have really made our mark."