"Keep the bigger picture in mind"

Light is crucial to increasing cannabis crop yields—that much is clear. But the matter is a little more complicated than that. Contrary to a widespread assumption in the industry, intensifying light levels alone won’t increase yields indefinitely. Data from research and commercial prospects shows balancing all other growing factors like irrigation, humidity control and temperature is key to get the maximum out of your lights to optimize production. It is certain that the genetics of cultivars (phenotypes) do have a determining impact on production as well. 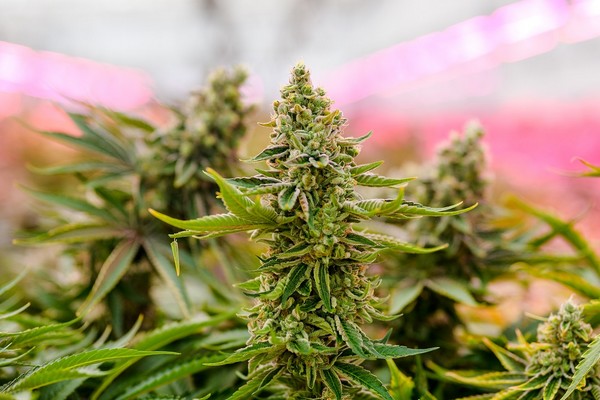 Wide variation in yields
Research involving trials both internally and at Signify customers shows that in many cases yields do indeed rise in tandem with light intensity. However, in some trials the yield did not increase proportionally to the light level. Upon analysis, it became apparent that this was due to other growth parameters such as improper temperatures or faulty irrigation. Increasing light intensity was more effective only when other growing conditions are adjusted to the light level. In cases where such factors did make themselves present, the yield curve flattened out at 900 g/m2, even though light levels rose from 800 to 1200 μmol/m2/s.

Production is strongly related to genetics, and we see that many hybrid varieties are performing in the medium production range. That, combined with legacy knowledge, creates the notion of 500g/m2 as a target benchmark independently of the intensity of light used. Results on data show that production in the range between 800 to 900 gram/m2 (dry flower weight) can be reached at the range of PPFD 700 to 850, as long as you steer the other factors according to the needs of the cultivar. The lack of control of other factors, and often also the choice of poor performing cultivars, results in a high production variation within any given light intensity. For example, at 750 PPFD the right cultivar with appropriate steering can breach the 800g/m2 production mark, yet poor performing cultivars or faulty steering will result in as little as 300g/m2. 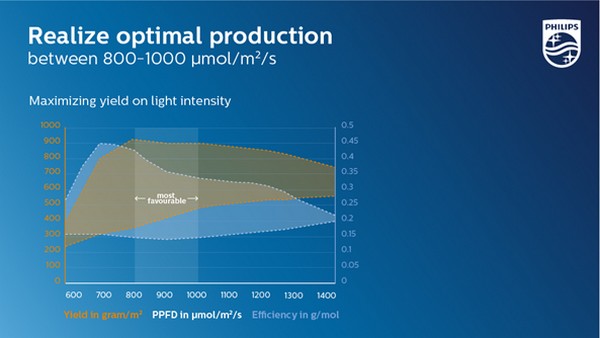 How to maximize yield on light intensity. Results from 140 data points over full flower cycle.

The visual above shows the relation of production and light intensity. This can be converted finally into efficiency numbers calculated in gram/Mol. The visual is based on research trials (2018 to 2021) and commercial data of more than 140 data points of full growing cycles.

Choosing high performing genetics can boost your production potential up to 900+ gram/m2 dry flower weight. Most growers could reach the maximum production between 800 and 1000 PPFD. Over 1000 PPFD we experience a diminishing return on the input of light, which almost feels as a plateau on increasing production. This is exactly the point where we see that the level of crop growth steering is not easily in line any more with the intensified light level. Between 700 to 1000 PPFD the optimal climate condition can be maintained. Currently, higher PPFDs result in facilities struggling to balance climate and irrigation with their PPFD level.

Signify’s research has taught us that light use efficiency is an important metric for growers. For example, at 700 PPFD we experienced high light use efficiency, where every mol of light given was converted in 0.45g of dry flower product. From PPFD 800 to 1000, production can be maintained where the efficiency reduces from 0.42 to 0.35g/mol. After 1000 PPFD the production and efficiency decrease rapidly.  To put it into perspective, each percentage of light given, with the right cultivar and climate and irrigation steering, could be providing a grower double the production when compared to the current benchmark of 500g/m2. All of that at a PPFD as low as 800-1000.

Higher light levels come with a more challenging growth process
Light, as important as it is, isn’t a cure-all and it can’t fix everything. And not only that: an over-reliance on light to the exclusion of other factors can even create environmental problems that suppress yield. Results have shown that around 1000 μmol/m2/s and beyond, the yield curve starts to diminish, because intense light creates its own complications. It may increase humidity levels due to higher transpiration of plants which often stimulate outbreaks of disease, for example. Cultivation with even higher light levels such as 1500 μmol/m2/s is like running the Olympics: if the factors are not perfect, it will cause injuries. That’s yet more testimony to the fact that growers shouldn’t put their faith exclusively in boosting grow light intensities. Rather, they should use just enough light, while also paying close attention to other factors that can affect yield. See the visual below for an overview of these factors. 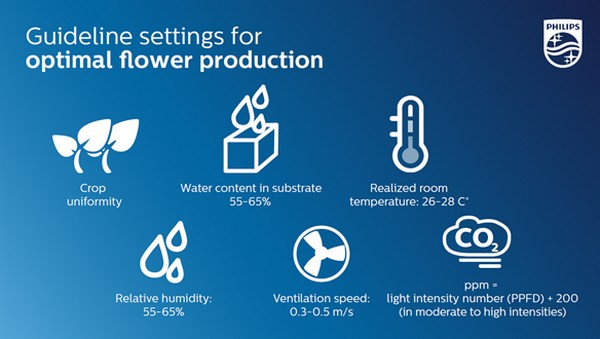 The bottom line is that light, whilst extremely important, is but one aspect in a wide range of factors. Growers need to keep the bigger picture in mind and be aware of the limitations of their own facility, and the influence this has on the cultivation.

Learn more about how our horticultural LED lighting can benefit growers around the world and visit Signify's webpages.