The Association of Natural Biocontrol Producers (ANBP) annually recognizes an individual who has made, or is making, extraordinary contributions to the field of augmentation biological control and its use in integrated pest management (IPM). This year they have selected one of North America’s foremost leaders in the industry. 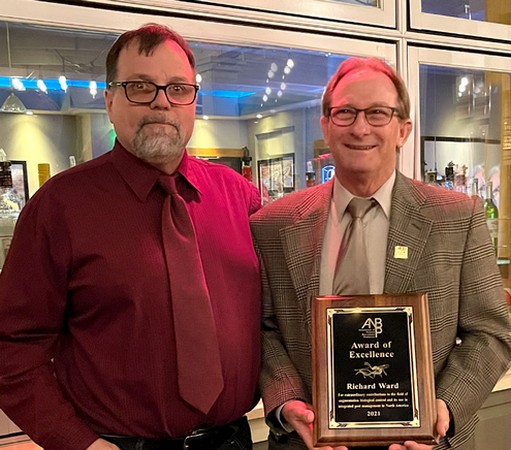 Richard Ward has had ties to agriculture his whole life, having been introduced to it at the tender age of three on his grandfather’s small
sugar plantation on the island of Barbados. He attended the University of Manitoba, where he completed a Diploma in General Agriculture.
Richard returned to Barbados in 1981, where, for the next eleven years, he held various positions in local companies specializing in agricultural inputs to the farming industry, as well as being a
grower of hydroponic vegetables primarily for high-end restaurants and hotels. In 1992, he moved to Canada with his family and worked as General Manager for Canadian HydroGardens Ltd. (CHL), a company specializing in greenhouse hydroponics. It was at that time that bumblebees and beneficial insects were starting to become mainstays in the greenhouse vegetable industry, and Canadian HydroGardens became one of the very first distributors of bees
and bugs in Canada.

In 2000, after eight fulfilling years at CHL, Richard moved to Biobest Canada Ltd in Leamington, Ontario, to be Managing Director of its fledgling North American operation. While there, he oversaw several expansions of the facility, moving it from primarily producing bumblebees to one that also produced several species of beneficial mites and insects. His work with bees was acknowledged in 2012 by the Canadian Food Inspection Agency (CFIA) when he received their Certificate of Recognition for his contribution in the development of the National Biosecurity Standard for the Bee Industry. During that time, Richard also oversaw the takeover of the operations of Sterling Insectary in California. Additionally, while with Biobest, Richard was
also responsible for business development in North, Central, and South America and saw the business develop to the point of needing a production facility in Mexico to support that rapidly growing market. Biobest Mexico was officially opened in November of 2009 and has continued to expand each year and is a shining example for the entire Biobest Group of companies. Richard was also responsible for the initial agreement to start up Biobest Argentina, a joint venture project, though he left Biobest prior to its actual “brick and mortar” start.

Richard left Biobest in mid-2014 with the intent to ease into retirement. However, his expertise quickly attracted recruiters. Richard has been involved in ANBP since early 2000 and was President from 2004 to 2008, serving two terms. After retiring, he remained on the Board of
Directors in an advisory capacity and was invited to one of its meetings in October of 2015. Not only was he sucked back into the industry by Beneficial Insectary Inc., one of the larger entirely North American-based bug producers, but he was immediately elected President of ANBP again and served a further three years in that capacity. At the end of 2021, Richard decided to semi-retire from Beneficial Insectary and the position he held as Director of Business Development. He is now Senior Advisor to the Board of Directors for Beneficial Insectary. Richard can run, but he can’t hide. ANBP always knows where to find him, and he continues to serve as Beneficial
Insectary’s representative on ANBP’s Board.

ANBP heartily extends its congratulations to Richard and wishes him every success and happiness in his future endeavors.