From wireless payments to wireless lighting

Imagine: an employee who is scouting, walking through a bright purple greenhouse. But everywhere he goes, the light turns white so that he can look around easily. Once he leaves, the lights return to the optimum spectrum for plant growth. Chess Wise, which develops wireless lighting control systems, is working on a technique that makes this possible. It is a technique that already exists in office buildings and which the Haarlem-based company is currently applying to greenhouse horticulture. The company did this for the first time some four years ago. At the time, it was used to wirelessly control lighting fixtures in greenhouses. 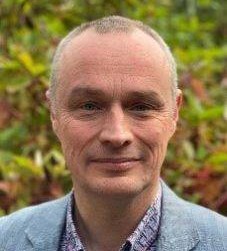 "With the introduction of LED grow lights, we ended up in horticulture," says Sales Manager Wim Hogenhout one afternoon in March at the office in Haarlem. Just before that, he explained in detail the technology that the company was working on and told us about the origins of the company. For this, we have to go back to 1988 when Chess, a Dutch abbreviation for Computer Hardware en (and) System Software, was founded. Nowadays, that company has split into several branches, with Chess Wise active in wireless control systems, such as lighting. The technology for this, based on a mesh network (a better variant of the well-known WiFi network), was already in use in the real estate sector. The lighting in offices, including at Chess Wise itself in Haarlem, is controlled wirelessly with it.

Endlessly scalable
As soon as we step out of Wim's office, the lights go out. The Mymesh system is responsible for this. A movement sensor helps. Wim: "The system is inspired by nature, in which a flock of birds or a school of fish moves forward in enormous numbers without colliding, but notably without one clear leader. Everyone communicates with each other. It's actually the same with a lighting system controlled by Mymesh. The system is not dependent on one central point, as is the case with WiFi. Mymesh has no single-point of failure. This makes the system endlessly scalable." 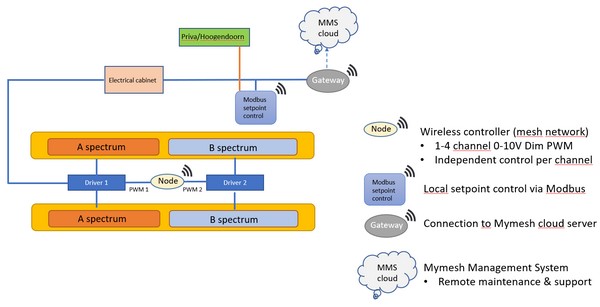 A schematic representation of the use of Mymesh in a greenhouse environment. Click here to enlarge the image.

The endless scalability is one of the advantages Wim likes to point out when explaining the technology. "In greenhouse horticulture, you often see fixtures that are installed with cables in a checkerboard pattern. Growers can switch the lamps on and off in large blocks, but they are not flexible and are dependent on the cabling. Moreover, when switching in a checkerboard pattern, they quickly lose the homogeneity of the lighting in their greenhouse. Without cables, with the right software and with the use of dimmable fixtures, they have the opportunity to control much more specifically."

Wireless pin devices
Chess Wise develops two types of modules for this purpose. One module per fixture controls the driver, the power supply, on the dimmable lamp. The other module, the setpoint control module, linked to a climate computer, passes on 'messages' to the entire network, with each module passing on that message. Only one of these setpoint control modules is needed, or several in the case of very large projects. "But compared to all those meters of cables, our network is cheaper."

In addition to being scalable, the wireless control system is also secure, Wim points out. "As Chess, we have a background in wireless payments with PIN devices, among other things. We developed the technology behind the first wireless mobile payment terminals. We also apply the strict requirements to make this safe in horticulture. Moreover, each module that we produce here in the Netherlands has unique encryption and authentication. This means that it is not possible, as is you can with remote controls for TVs, to control several of the same types of TVs with just one remote control. 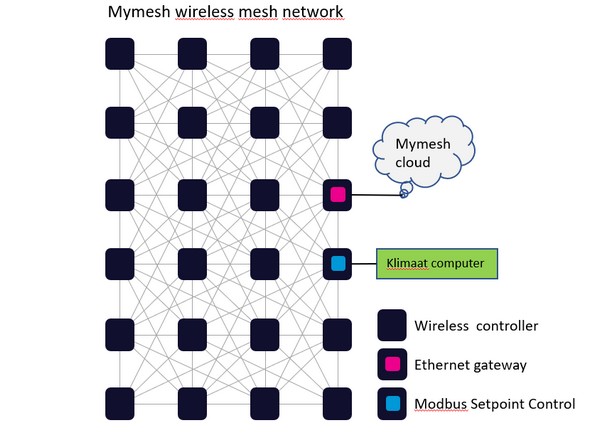 Dimming by color
The wireless network usually works with a server in the cloud. This makes it possible for growers to operate the network remotely and for Chess Wise to offer remote support and implement the latest developments. The only thing needed for this connection is a 'gateway'. Most growers choose to work without the cloud connection, with an entirely local working network linked to the climate computer, Wim says. "The gateway is present and is used by Chess for remote support and control at the grower's request."

A new development being worked on is dimming light very specifically by color, as in the example already given in the introduction. This requires the employee to wear a tag that communicates with the lights. As mentioned, the technology is already available in a similar form in the real estate sector for track&trace applications. Introduction in the horticultural industry is still some way off. 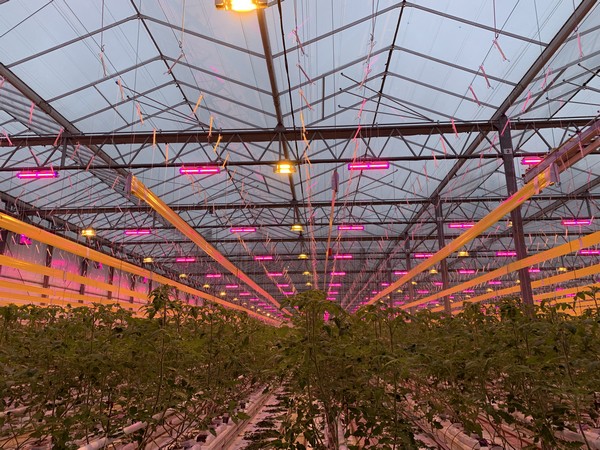 Controlling four power supplies simultaneously
Another development, a module that can control four power supplies simultaneously instead of one, is already on the market. Currently, one power supply per color with one module is still needed for this. For a project at the German tomato grower Vitarom in Grevenbroich, this product, with four-channel functionality, will already be on the market this summer. Wim: "With this, the grower will be able to control the color even more specifically." This is an extension of a project at the grower's premises. At the moment, 16 hectares of Tungsram have 3,200 dimmable fixtures with a Mymesh Micro BLC Industrial wireless controller from Chess Wise. The fixtures are divided into seven groups, each of which can be controlled separately with one mouse click. 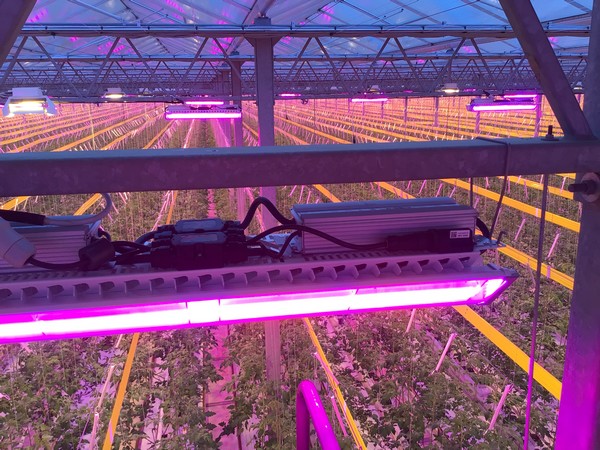 The Chess Wise module can be seen on top of the luminaire.

Doubling production
Chess Wise was introduced to greenhouse horticulture via the fixtures of fixture manufacturer MechaTronix but is independent of any brand or fixture. Wim currently sees lighting companies in the market that have their own wireless control system, companies that work with wired control, and companies that are looking for a control solution. "We have a solution for the latter group of companies—a proven technology from the world of real estate, which is particularly interesting given the current energy developments. Besides allowing a crop to grow optimally with natural and artificial light, energy-saving is now increasingly important. If you can then dim your lights in a targeted way, that is a major advantage. Moreover, as we have seen in practice, growers can sometimes even double their production by using proper lighting."

In greenhouse horticulture, the developer of wireless control systems limits himself to producing the modules and commissioning the systems at the grower. Sensor technology is not supplied for greenhouse horticulture applications. "The installer takes care of installing the fittings, the power supplies, and our modules. We visit projects to put the systems into operation. For this, we consult with the grower on how the groups should be arranged." Therefore, a visit to Vitarom's greenhouses is on the agenda again for later this year.