With the deployment of a spraying robot, crops can be sprayed fully automatically. The robot does its job and reduces the grower's workload. One of those robots is the Wanjet S55, with a width of 30 cm, it is suitable for many crops, including tomatoes, sweet bell peppers, roses, and gerbera. Eric Gerritsma of Holland Green Machine will be showing how it can be converted into a foam-producing, disinfecting spraying robot at HortiContact. By mounting an extra reel on this spraying robot, it can be converted into a disinfection machine. The robot then produces foam to combat viruses. 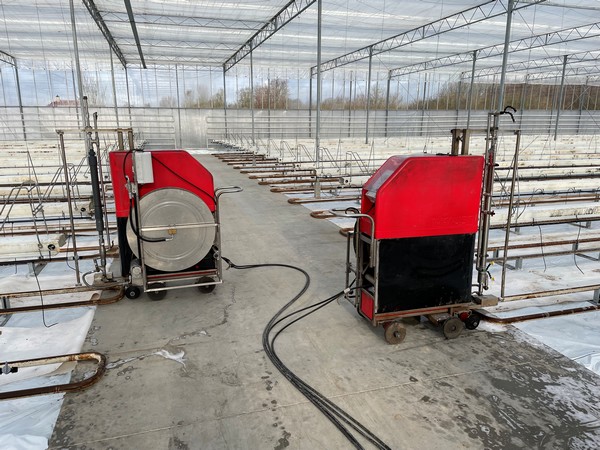 Together with its German manufacturer, they also have approval for their own product: Menno Florades. Eric says that "Menno Florades is a powerful disinfectant, effective against bacteria, fungi, viruses, and viroids. Menno Florades is based on benzoic acid and has been specially developed for agriculture and horticulture and, therefore, specifically tested for plant pathogens. It is the only disinfectant in the Netherlands with a GBM approval. Because of its plant friendliness and fast action, cutting equipment, like knives and scissors, can be disinfected regularly during harvesting activities. Besides, any other foam and disinfectants can, of course, also be sprayed with the extra reel."

Extra reel
An additional reel is attached to the left side of the (standard) spraying robot and is controlled by the robot's computer. Incidentally, this extra reel makes the robot about 20 cm wider. In addition to the extra hose for compressed air, a specially designed spray boom has been mounted into this foam disinfection spraying robot. This is where liquid and compressed air come together. Foam is produced under pressure.

The installation for foam production is optional, by the way. The application can be easily disconnected so that the spraying robot can be used again for crop protection work.

Eric says that "within a few minutes, our standard S55 spraying robot becomes suitable for disinfecting foam treatments in the greenhouse. This makes the mobile spraying robot a simple solution to fight viruses."