Crop protection innovations: Who will give the final push in the right direction?

At an event on crop protection, it never takes long before a target, and a deadline are mentioned. This was also the case at the World Horti Centre in Naaldwijk recently. By 2030, Europe wants the use of plant protection products to be halved. The question here is not so much whether we agree but more how we will deal with it. 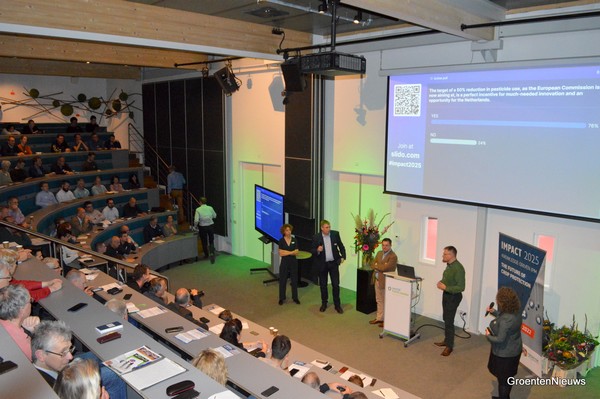 This was also stated by Jaap Bond, figurehead of the Top Sector Horticulture & Starting Materials, in his opening speech. The Top Sector organized the event entitled 'The Future of Crop Protection.' Two stands full of crop protection producers, policymakers, advocates, and also a few growers attended the English presentations. 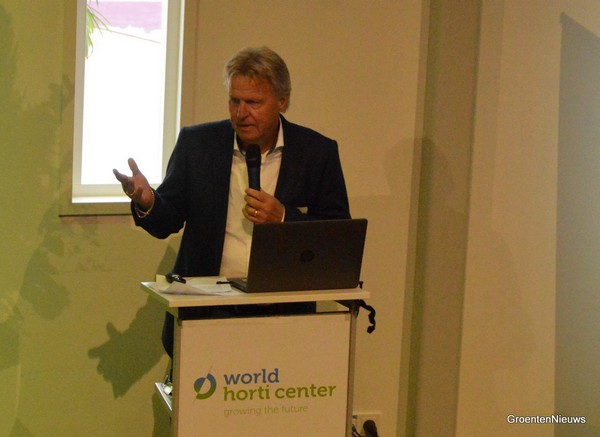 Arjen Lubach's name was also mentioned by the figurehead. The Dutch TV comedian recently slammed the floriculture sector on national TV. His playfully intended speech included fierce criticism of the use of plant protection products. Broadcasts like this sting the sector, which says it is working hard to do things better and more sustainably and is already doing so. 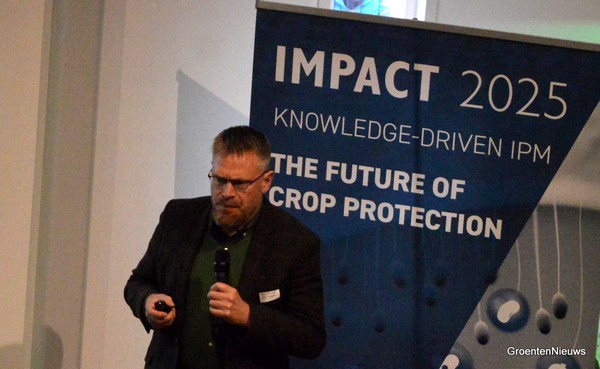 "Don't be naive"
The three main speakers at the event each gave insight into this in their own way. The first presentation was by Toby Bruce of Keele University. The Insect Chemical Ecology professor gave a keynote presentation in which he argued that the agricultural ecosystem is vulnerable without the help of plant protection products. He called it naive to think that it is possible to abruptly stop chemical crop protection all at once. According to the professor, "we" cannot afford to let crops fail because "we" do not want to use any more pesticides. 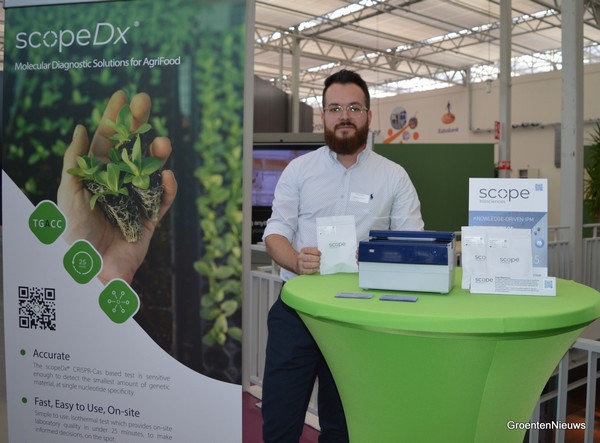 The professor called for a redesign of the agricultural system. In this, he sees opportunities for research into making growing environments less suitable for pests. As an example, he showed how in cereal cultivation, it is possible to move from a vulnerable monoculture to one in which, for example, by integrating carefully selected plants, pests can be kept at bay. There is also work to be done to make crops more resistant and to make optimal use of the power of natural biological control agents. 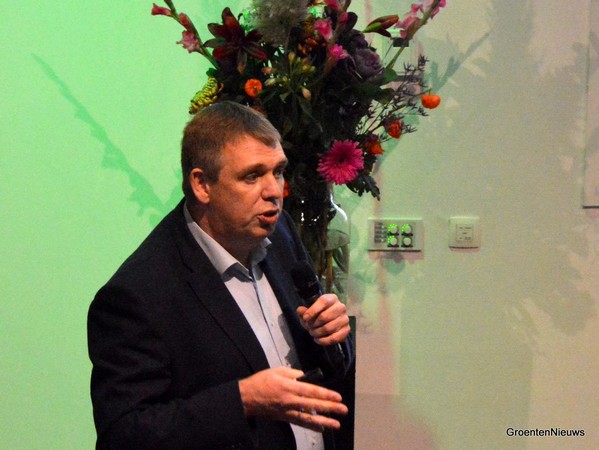 Showing that switching is possible
The British professor also pointed to the good use of the already abundant data available. Grist to the mill for Karel Bolckmans, Chief Technology Officer at Biobest. In his talk, he pointed to all the technical possibilities that already exist for Integrated Pest Management (IPM). "You can already fill a whole World Horti Center with it," he said. On the screen, he showed a whole range of options.

Before he finished his speech, he did want to respond to the Keele University professor's keynote. It is precisely the presence of numerous new techniques that, according to the Biobest man, means that it is already quite possible to do without chemical crop protection in many cases. Karel cited examples, including from Spain. More than ten years ago, very good results were achieved there in fruit vegetable cultivation using only biological control. Production per square meter increased, and the quality of the products was also good. Yet the growers did not change their minds. Growers made the switch when a media storm erupted in Germany following a report on excess residue levels on fruit and vegetables imported from Spain. 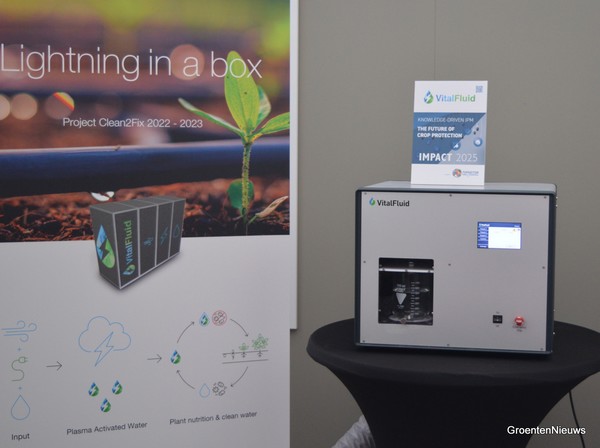 Unfortunately, according to Karel, too little has been written in the scientific literature about the successful switch from chemistry to biology already achieved with biological crop protection. Karel mentioned Vivent as a party that can use innovative sensors to image plant stress. That could help gather evidence on how to make the switch from chemistry to biology without growers fearing the scenario outlined by Professor Bruce earlier that afternoon. A crop must not fail, but the Biobest representative says this does not necessarily require chemical crop protection. 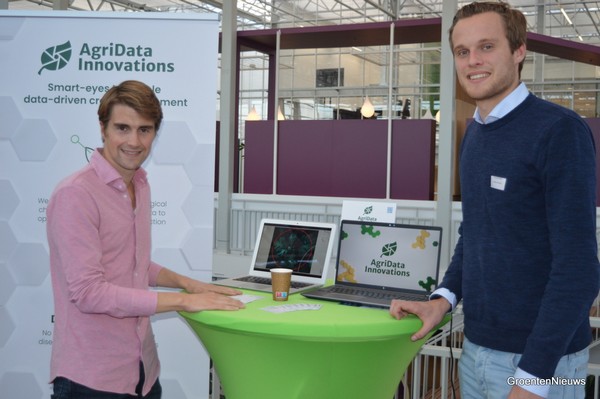 Pim van Geest and Tom van de Water of AgriData Innovations heard the phenomenon of data come up a lot at the event. They know what to do with it

Plea for precision with data
Not that Karel is against chemical crop protection. On the contrary, he argued that his advisers and also those of colleagues in biological crop protection have the knowledge to advise intervention with chemicals sometimes. Prevention and biology stop or prevent a pest in all cases. Karel, who wanted to guard against positions being interpreted too black and white, pointed out that the advisers have an important role as a link between the grower and the research that happens everywhere. Moreover, they know how it is sometimes possible to use chemistry in such a way that it fits into a system with predominantly biological control agents. Good integration of all available means and techniques in Integrated Pest Management (IPM) is the key. 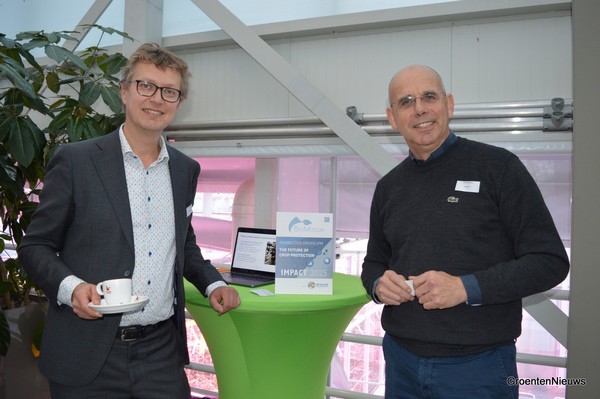 Clemens Stolk (Innova Connect) was moderator at the event, together with Marleen Riemen of WUR. Here, Clemens visits Alex Schmeets of BioMosea, which develops new biological agents based on micro-organisms. On the one hand, these are biofungicides, and on the other, biostimulants.

With the data available today, it is no longer possible to simply spray substances around at random but to spray very selectively only where needed. Ten companies had the chance to present themselves to the general public at the event. Among them, some startups are betting on precision crop protection. As well as the companies pictured, Blomitec and PATS Indoor Drone Solutions were also present.

In his presentation, Karel mentioned 'spot spraying' as something he believes many were already taught in their training. Yet, according to him, it happens very rarely. One of the few growers in the room also knew why. It takes time but, above all, it is not realistic for growers who have numerous tasks to wade through mountains of data before they start fighting that one square meter with too many aphids with a spray hose and tank on their backs. Automation can help here. 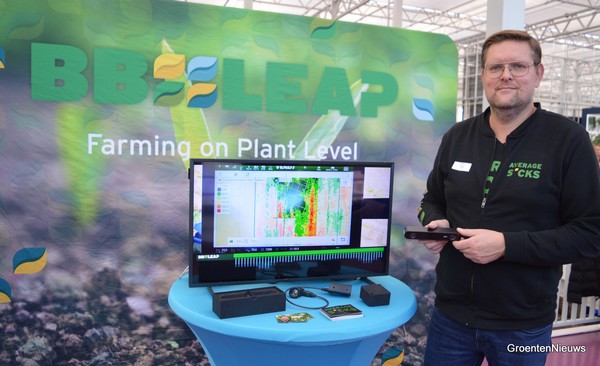 BBLeap is investing in precision spraying in open fields. The company develops its own software as well as the hardware to collect the data. In the picture: Johan Kikstra

Laws and regulations
On behalf of Bayer Crop Science, Christy van Beek took the floor. She showed, supported by figures, how difficult it is these days to keep growers' medicine cabinets up to date. Because of difficult legislation and lengthy authorization procedures, crop protection producers such as Bayer sometimes already decide not (or no longer) to submit a registration for a formulation of active substances. Of the 168 dossiers in the Netherlands over the past three years, only 58 eventually made it to practice. 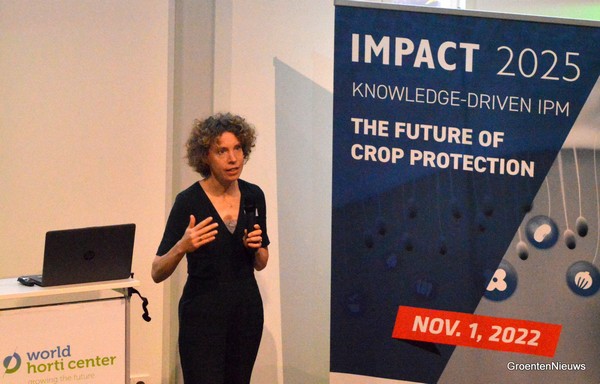 Time is money, and money, even with parties like Bayer, is not infinite. Christy, like the British professor earlier, pointed out the importance of good crop protection products and that the sector cannot do without them completely in a flash. At the same time, she also indicated that there is certainly room for discussion as to whether the transition that has been initiated is going fast enough. 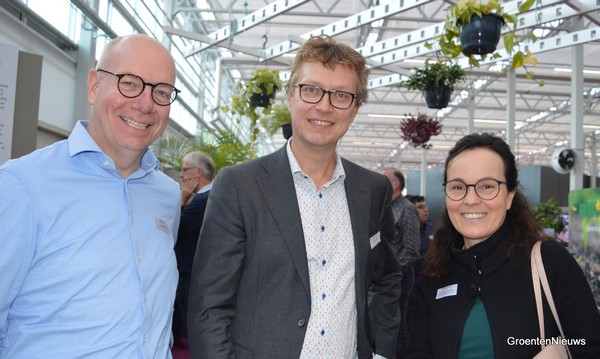 Accelerating innovation
According to some in the room, this is not the case. After a panel discussion with the three speakers mentioned above and Peter Knippels of LTO Nederland on, among other things, how to speed up innovation, Richard Harrison of WUR and Susanne Sütterlin were allowed to reflect on the afternoon on behalf of the Ministry of LNV. A key issue, it turned out, is clarity on where things are going. Those who put money and effort into innovation do want certainty that, when all is said and done, the innovation will be allowed in practice. That herein, the Netherlands has to do it together with another 26 European member states presents a challenge. 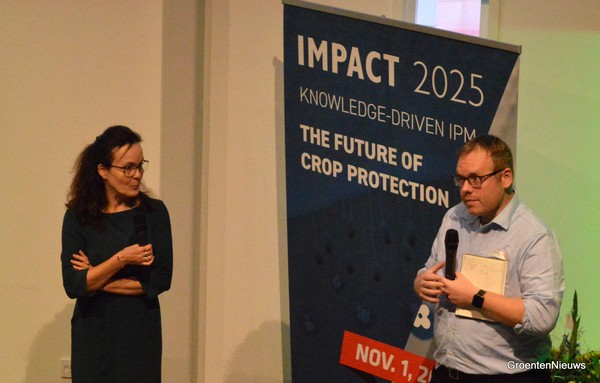 At the same time, the sector itself is also on the move. As the final question of an interactive session, the audience was asked what they themselves can do to achieve the transition goals with crop protection. Besides answers such as 'voting for other politicians,' there were also answers in the direction of doing more research, among other things (although from the audience, someone from R&D also pointed out that perhaps less research should be done, but rather brought together and applied). 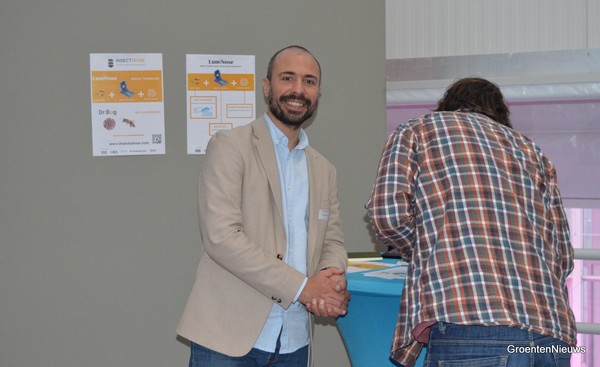 Aria Samimi of InsectSense with a visitor at his stand

Money is always a thorny issue. According to Bayer's Christy, it is the reason why only a few big players in the chemical industry are putting agents on the market. A grower in the audience pointed out that money should not be a reason to do nothing. In doing so, he pointed to his own experiences from the past three to six months. He appeared to be able to pass on the increased costs due to the energy crisis thanks to having 'a good story'. According to him, with the same good story, it should then also be possible to deploy possibly more expensive innovative crop protection and also see the extra cost of this reflected in the price of a product. 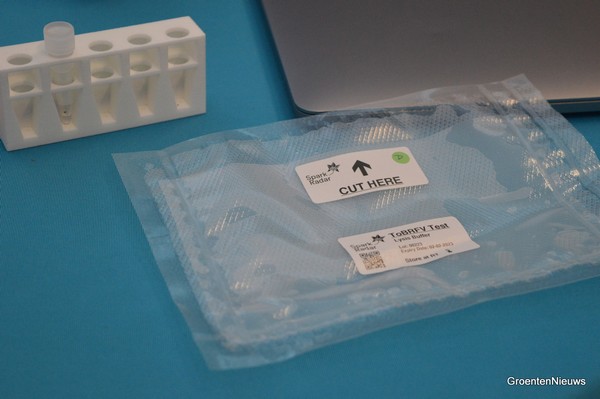 With that as one of the last comments from the audience, there was an opportunity to talk afterwards and visit the ten startups at their booths. 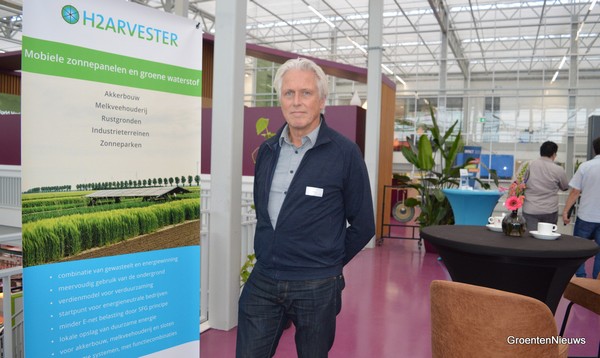 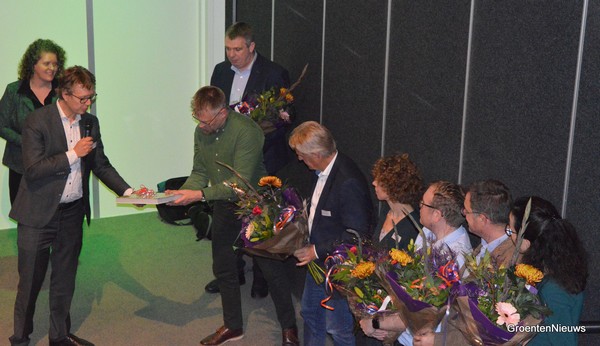 Flowers for the speakers, still a nod to Lubach