Another major vertical farming bankruptcy. This week, Plantagon International has been declared bankrupt. Cashflow problems turned out to be insurmountable for the Swedish company.

Agritechture
Plantagon International is headquartered in Stockholm and describes themselves as an Agritechture company. "Plantagon moves food and food production into the city by implementing technical solutions into excisting city infrastructure", they explains on their website. "In practical terms, that means using existing assets ans real estate with lower need for capital investments."

The company made it into the news regularly with their city and indoor farming concepts and plans - like the 'plantscraper' and office blocks containing 60-metre high urban farms. Last year, the first Plantagon farm was opened, partly owned by Plantagon International.

Cashflow
This week, Plantagon International was declared bankrupt. According to Henrik Borjesson with Fylgia, the company handling the bankruptcy, the issue - it might not be a surprise since the company is declared bankrupt - is money and the (lack of) cashflow. "Currently it is too early to make more comments on the case. Our focus is to get a clear view on the situation and to sell the products we have in the bankruptcy. There's no hard value assets involved - it's mainly patents and trademarks. The company has a clear idea and view, but hasn't been able to get it into business. Now, we're looking for someone who wants to pick up the ideas, patents and trademarks, and goes on with it."

Back in 2017 Plantagon announced its 40th approved patent - with 28 more to be pending. The patents filed within four patent families, all related to growing plants indoors. 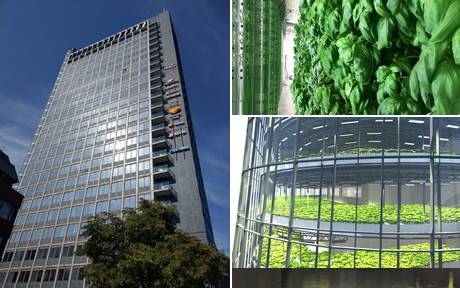 Stockholm farm
As said, last year the Plantagon City Farm in Stockholm started production. The company is an example of modern indoor farming, located under office tower DN Skrapan and equipped with over 244 vertical positioned, 2500 mm long LED-fixtures and re-using the heat harvested from the lamps in the building.

Plantagon International is a shareholder of the Stockholm farm. Money for this enterprise was also collected through a crowdfunding: last year over 420.000 euro was invested by 477 investors, both private as corporate, and according to the Fundedbyme-page, this resulted in 4.21% of the company's shares.

During the crowdfunding, the company declared plans to open 10 large-scale farms. "With Plantagon CityFarm, you can now buy local and sustainable vegetables. The first facility in Stockholm is fully-financed and begins its production under 2018's 1st quarter. Our target is to build 10 CityFarms in Stockholm by 2020", the crowdfunding website read.

Farm
Whereas the farm itself is unavailable for comments today, insiders report the company has had trouble selling the produce for the needed price. Within two months after production started, the CEO left the company.

The future of the Stockholm farm is currently unclear, as well as the situation of the international offices. On their website, Plantagon reports on Shanghai, Mumbai & Singapore offices.