Correctly circulating air in a glasshouse can be tricky as you can’t see currents and airflow. Here are some tips and tricks you can use to optimise air movement in your glasshouse.

Optimising the climate for crop health should be a key objective of any grower, but achieving the optimum conditions is easier said than done. It’s worth remembering that plants don’t respond to temperature and humidity in the same way that people do, so it’s important not to use humans as measuring devices! Even if the glasshouse climate feels comfortable to you, it doesn’t mean it is ideal for the crop. For a start, the crop could be at ground level, on a bench at waist height, or stretching upward several metres. The climate within the crop can be quite different from what we initially perceive, with temperature and humidity levels potentially less than ideal, or even harmful to crop health.

Using data from just one or two measuring boxes to steer the whole glasshouse climate is fairly normal practice, but it can mean that temperature gradients or large variations in humidity go undetected. A thermal imaging camera can help to visualise the issue, with experiments seeing leaf or flower temperatures over 10°C above the air temperature. Similarly, the crop could be radiating heat causing leaf temperature to be significantly lower than the surrounding air, putting the crop at risk of disease. The good news is that these issues are relatively easy to solve. 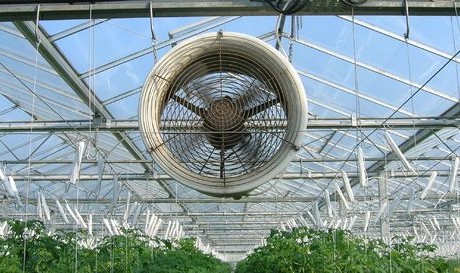 An effective air movement system can help to achieve a homogeneous climate, i.e. the same everywhere. Many UK growers already have systems in place, such as horizontal fans suspended conventionally from the greenhouse structure or under hanging gutters with air ducts attached or a vertical fan setup. The real value though is in knowing which is the most effective and how best to use it.

Demonstrations at a recent GrowSave event gave a useful insight into how air moves inside a typical glasshouse. Without any fans running and with vents closed, there is little to generate movement, hence air remains static. As a result, leaf temperature can rise well above ambient temperature, as the plant tries to disperse energy to prevent overheating and subsequent damage. Visibility of the problem can be difficult without sensors in the right places, but action can be taken nonetheless. Running fans to stimulate air movement under a closed screen can bring the situation under control, although some systems will be more effective than others.

A horizontal fan setup pushing/pulling air around the glasshouse can be good for taller crops but has less impact at ground level. In such cases, a vertical fan can be better. There has been considerable advancement in fan technology in recent years, with numerous horticulture-specific manufacturers entering the market. A well-designed vertical system will draw air from a wide area and disperse it downwards in a conical shape, ensuring penetration of the canopy and helping to create a homogeneous climate.

Air movement is also important to maintain target humidity levels. As the crop transpires, there can be a build-up of moisture in proximity to the plant. Ensuring sufficient movement of the air is important, therefore, to mix this moisture with the drier glasshouse air, thus reducing disease risk. Many modern screens allow moisture to move through the screen material. By using small amounts of vent on both sides of the ridge, excess moisture can be removed from the air below a closed screen without resorting to pipe heat or screen gapping, thereby saving energy.

Ultimately, the aim is to ensure the climate conditions around the crop are conducive to maintaining a healthy environment. Where there is any doubt about the effectiveness of existing fans, a simple smoke test can be carried out.