CAN (AB): “We've never had a flood like this before”

Spring is around the corner and that means busy times for greenhouses. However, Debs Greenhouse in Morinville, Alberta had to give the workers a day off. A flood resulted in a layer of water in the greenhouse. “We expect to get some water from the snow melt but this amount was more than we are equipped to deal with”, says owner Debbie Foisy. "It is tough, there is lots of work to do", she told Global News. 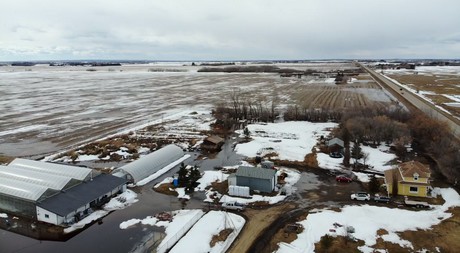 Due to rising temperatures the snow in the neighborhood is melting. Debbie explains: “The ditch on the highway is really shallow and there is a farm field that is also really low. So instead of the water going straight down the ditch, it flows over the field to this property.”

The water flowed into the greenhouse, but thanks to hard work, the plants were already lifted, which prevent the plants from further damage.

Government is looking for a solution, but that will be for next spring. Now Debbie is hoping the worst is over.

The area has to deal with flooding more often, but it seems to get worse over the years. “We have never had a flood like this before”, says Debbie. “We expect to get some water from the snow melt but this amount was more than we are equipped to deal with.”

See the broadcast below :