Samsung announced an enhancement to its mid-power LED package – the LM301H – for horticulture applications, such as greenhouse and vertical farming. At 3.10 micromoles per joule (μmol/J), the newly introduced LM301H now features the highest photon efficacy among today’s mid-power white LED packages, according to the manufacturer. 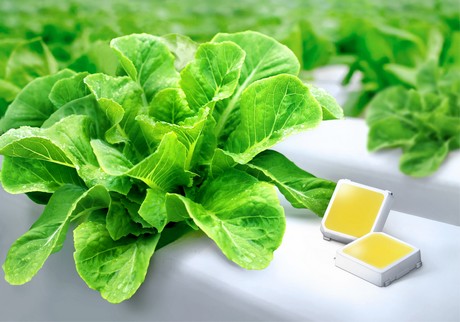 “This breakthrough in photon efficacy will go a long way in helping indoor farm owners to maximize plant growth and quality, as well as their profits,” said Un Soo Kim, senior vice president of LED Business Team at Samsung Electronics. “We are committed to continue innovating white LED solutions optimized for healthier plant production as we solidify our leadership in the horticulture lighting industry.”

As a result of this photon efficacy, lighting manufacturers can use 30 percent fewer packages in each luminaire to achieve the same efficacy level as the previous version of the LM301H, allowing for smaller and lighter lamp designs as well as lowered manufacturing costs. In addition, by using the same number of packages, the light efficiency of a luminaire can be improved by at least four percent, enabling indoor farms to reduce their energy use.

Samsung is able to achieve this advancement in photon efficacy by optimizing the chip’s light-emitting layer to convert electrical energy into photons with greater efficiency, while an improvement in chip structure minimizes light loss, delivering more light to plants.

Furthermore, thanks to Samsung’s advanced flip-chip design, the LM301H requires no wire bonding, which helps extend the packages’ performance and reliability. Titanium dioxide around the chip also ensures higher durability when exposed to agricultural chemicals.

To promote even more balanced plant growth, the white LM301H packages encompass a broader spectrum of light from blue and green to red, enhancing immunity from plant disease and providing greater nutritional value.

Samsung expects to begin mass producing the new LM301H packages at the end of this month and will be showcasing them at LIGHTFAIR International 2019 in Philadelphia, Pennsylvania, from May 21 to 23.