At this moment, Dutch growers are still using the anti-fungi crop protection agent Fenomenal to clean their (drain)water. As of August 14, that is prohibited, because the permission has expired and because the term of use has expired. Still, that does not necessarily mean that fungi such as phytophthora will have a 'free reign' from that moment onward, according to Kees Luyks of Luykx Ultrasound. The company has patented ultrasonic equipment to fight fungi. "Ultrasonic high-pressure waves break up the fungi, after which an environmentally friendly crop protection agent can be used to eliminate them." That could be of relevance to growers outside the Netherlands as well.

Cavitation
The use of ultrasonic high-pressure waves is not new. The method, also called cavitation, has been an alternative protection method against fungi in water. The basis of the technique are ultrasonic transmitters which, for example, can be placed in the return silos at growers. Special is that the transmitters of Luyks Ultrasound have a twofold function. Important in this is the large power, generating a pressure of up to 2000 bar. 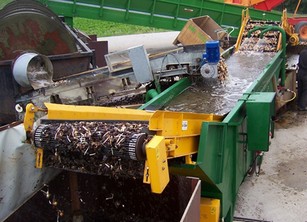 Flower bulbs
The technique has been extensively tested during the washing of flower bulbs, particularly tulips, to combat fusarium in the rinse water. Kees: "Measurements during the washing of the tulips showed that the ultrasonic technology is already effective after a few seconds." A large advantage of this technique is this way of mechanical protection does not cause resistance, because the fungi are being mechanically pressed. "With this protection method, it is possible to safely remove pathogens from the drain water and to recirculate it. Moreover, after using this technique, only 20-25 percent of the crop protection agents used today is required, because the fungi have been substantially weakened.

Because of the phasing out of Feomenal, Kees is looking for five greenhouse growers to show the effect of cavitation in the greenhouse horticulture. "With a quick test of the drain water, I can show that the drain water is free of fungi after using this technique.