"As long-time growers, we know what plants want"

Spectrum King has announced that its proprietary spectrum has been patented. "We have been working hard to make the best, most efficient full spectrum LED grow lights. As long-time growers, we know what plants want, and we have been working hard for years to produce something special that makes both plants and growers happy," the company explains. 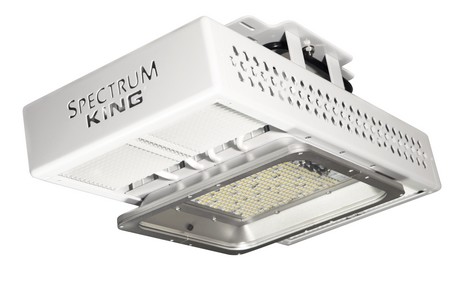 "Spectrum King LED full spectrum LED grow lights consistently emit wavelengths in the range of 380 to 779nm. This includes those wavelengths visible to the human eye (what we perceive as color) and the invisible wavelengths, like ultraviolet and infrared. Our SK402 and SK602 LED grow lights truly mimic natural sunlight while matching intensities of traditional HPS lamps," they continue.

"Natural Sunlight includes all spectrums, even beyond what we can see with the naked eye such as ultraviolet and infrared. Traditional HPS lights put out an intense high band of limited nanometer wavelengths (yellow light), which activates photorespiration which is why they have been so successful in agricultural applications up to today. LED grow lights that provide only two, three, four, or even eight colors will never come close to reproducing the effects of sunlight. With so many different LED spectrums on the market it gets concerning for a large farm with a variety of species whether or not that LED grow light is right for them; with Spectrum King LED No matter what species or genetic you grow under our light, it will succeed without having to second guess the spectral output. Why change what Mother Nature has already perfected over millions of years?" the company concludes.