Lighting up the northern sky: the story of Aurora Nordic

Some consider the regulatory environment in Denmark very promising. Even though the regulations are quite strict, growers are allowed to produce as many flowers as they want. As of now, Denmark is the only country in Europe that allows this. This is exactly one of the reasons why many big Canadian companies chose the Danish peninsula as the place to direct their investments.

Aurora Cannabis, one of the biggest players in the cannabis industry, also eyed Denmark as the most suitable place to start European production – and they already knew who was the right person to talk to.

Mads Pedersen is the head of Aurora Nordic, which arises from a joint venture between Aurora Cannabis Inc. and the Danish company Alfred Pedersen & Søn, and his story within the horticulture industry started many years ago. The Pedersen family has been successfully running a vegetable company for more than 70 years. “The vegetable company was founded by my father, and I took over in early 2000. When the company started, it had 800,000 sq. ft., and now it counts more than 3,600,000 sq. ft.”

Through his family horticulture business, Mads Pedersen learnt the tricks of the job and took advantage of his knowledge to start off Aurora Nordic on the right foot. “We mainly grow tomatoes, but also cucumbers and peppers,” he says. “We were already growing premium products, and we were used to growing tomatoes in controlled environments. Yes, growing tomatoes is not like growing cannabis, but there are some similarities with regards to the approach to large-scale indoor cultivations.”

Mads remarks that the things to take into consideration when growing tomatoes in controlled environments are fairly similar to growing cannabis as well. “The way we grow it is quite similar as the focus is on climate control, humidity and so on. The mechanisms are similar in the way that we want to produce large-scale, thus aligning to the way we run the company and the way we grow crops.”

However, even though Mads boasts many years of experience within the food industry, he takes care to point out that the company has been able to manage different kinds of crops at the same time thanks to the professionalism of the operating team. “The reason why we can do both is mainly because we have a very good team. In addition to that, teaming up with Aurora allowed us to benefit from their extensive know-how and they certainly are a strong financially partner.”

The Danish advantage
While many European countries are still discussing whether or not to legalize medical cannabis production, Denmark went one step ahead, making it one of the few places where MMJ export is allowed. As a consequence, Danish growers got ready to tackle such a profitable market. “One of the main reasons Denmark is at the forefront of MMJ regulations in Europe is that growers can grow as much cannabis as they can,” Mads explains. “This rule was added to exactly anticipate the entering of the market by Danish companies, granting them a strategical advantage in comparison to other European colleagues. Denmark was the first country to make a program that sets the bar really high for quality. At the same time, there is no limitation for the amount of cannabis that can be produced, unlike Germany or the Netherlands. It is a very liberal legislation.”

An oversupply danger?
Recently, many commentators and insiders pointed to the fact that there is a danger that the market will face an oversupply in the future. According to Mads, however, this future might not be as distant as anticipated. “I am afraid that within 2-3 years, there will be an oversupply of cannabis that will inevitably affect the market and therefore many producers.” According to Mads, the first to experience consequences will be smaller growers and operations: “Everywhere there are companies that want to establish themselves. Only in Denmark, there are enough growers to satisfy the demand from Germany. I think that there will be too much cannabis in a few years, and this will be a disaster for smaller companies.”

Similar to what occurs in the food industry when there is an oversupply of a given crop, prices are expected to decrease, and the results of this go beyond companies’ reach. “Oversupply will lower the prices, thus pushing someone to lower the quality of their product. As in every other market, if there is too much production, the quality might go down, and this could happen to the cannabis industry as well,” Mads explains. "To prevent this, we are setting our quality goal very high."

The role of horticulture
In a market that is anticipated to be extremely competitive, Mads believes that smaller cannabis operations will struggle to stand out, even though they would be producing very high-quality products. “There are a lot of small production companies that can produce very good quality, but that is not on a large scale,” he explains. “This is exactly where horticulture comes into play.”

“The role of horticulture is to professionalize and upscale the whole production. Growers need to make their business more industrial. Tomato growers can help a lot, we lived in a very competitive market for years. Thanks to my extensive horticulture background, I know how to upscale things, how to bring the cost down. I know how to grow basically.” 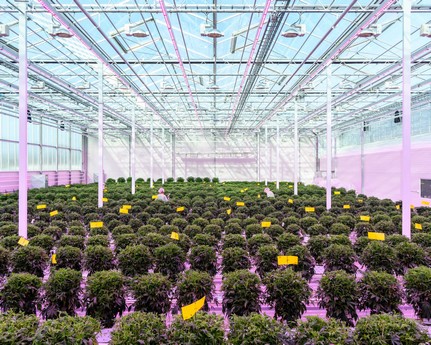 He continues: “There is a lot of cannabis in the market that is not good enough. Horticulture can help grow better quality in larger amounts, and especially with competitive prices.”

Large-scale premium production
According to Mads, Aurora Nordic is currently building one of the largest facilities in Europe, also thanks to the liberal Danish regulatory environment. Especially on this occasion, Mads’s horticultural knowledge supported him in carrying out such a big project. “You have to be sure that you can make a facility that can produce consistent quality. You have to work with a lot of automation and equipment, like cooling and lights for instance. It’s one thing to grow big, but to grow premium quality is something else. One has to make a lot of investments in automation. I advise novel cannabis growers with a background in small-scale operations to look at some of the companies that have been in the horticulture industry for years. They can show the way to large-scale premium production.”

Denmark is leading the way
In comparison with countries like the USA or Canada, Mads points out that in Denmark it is not that difficult to find specialized laborers, as “the stigma is not as strong here as it is there,” he says. “Cannabis companies can dialogue with banks, and people here think that working in the cannabis industry is a viable job.”

“I truly believe Denmark will be one of the leading countries in the nascent MMJ European market. All the major LPs from Canada are represented in Denmark. One of the main reasons is the good climate, as growing facilities would not require much cooling down.”