Roots Sustainable Agricultural Technologies has hosted a government, departmental and business delegation headed by the South Australia Minister for Primary Industries and Regional Development, The Hon Tim Whetstone MP, at its research and development hub in Beit Halevy, Israel.

The delegation organised by the Australia-Israel Chamber of Commerce learned about Roots’ agri-tech solutions – including its patented Root Zone Temperature Optimisation (RZTO) and Irrigation by Condensation (IBC) technologies - and how they might be applied in Australia to help ameliorate the impact of drought on agriculture.

The Australian agricultural sector at the farm-gate is valued at US$45 billion annually with nearly 80% of produce exported to global markets. However, water scarcity for agriculture use is becoming an acute challenge, especially in South Australia.

The research and development hub also highlights the capability of Roots’ world-first off-grid Irrigation by Condensation technology to grow staple crops. The IBC off-grid system utilises humidity in the air and energy sourced from the sun or wind to irrigate crops and operates without access to electricity or a normal water supply. IBC technology (solar and/or electric versions) have already achieved Agronomical Proof of concept, completing the full growth cycle of nine different crops including tomatoes, peas, spinach and sorghum.

South Australia Minister for Primary Industries & Regional Development, the Hon Tim Whetstone MP said, "We were very impressed by Roots' technologies, including the Irrigation by Condensation (IBC) and Root Zone Temperature Optimisation (RZTO) products. They are very relevant to the challenges faced by both the South Australian and national agricultural industries. IBC technology has the potential to support food production in the most remote communities who have limited access to water, including Indigenous communities. We welcome further collaboration with Roots to explore the possible use of these technologies and the impact it could have on South Australian agriculture.”

Mark Allison, CEO and Managing Director of Elders Limited, said after inspecting the facility, “It was great to have the opportunity to review the Roots technology. We see this as a helpful tool on a number of key market segments in Australia.” 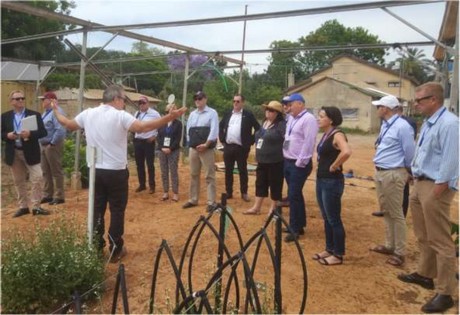 Roots CEO, Dr. Sharon Devir said, “We are very excited to be able to show how our technology can add value to farmers of many crops across Australia. Like Israelis, Australians have always lived with drought and its consequences. However, it is likely that climate change is making drought worse in the southeast and southwest of Australia. Our innovations are allowing farmers to better manage cycles and increase yields on a variety of crops and we believe they can have a similar impact in Australia.

“Even in remote areas the solar-based IBC system could be an important avenue for indigenous aboriginal communities to produce agricultural crops just from humidity in the air. Securing self sufficient food supplies on a remote community level is an important part of the vision of the use of IBC in Australia.”