It’s no secret pathogens can inflict damage on plants. To those growing plants as a hobby, this is a nuisance and an inconvenience. To a company that subsists on plant growing, however, it can be a disaster, threatening its very survival on the market.

Premium cannabis supplier Riverview Farms, which is located in the Salinas Valley, has decades of experience in the agricultural industry. They use a combination of natural approaches and cutting-edge technology to grow their products. Riverview Farms source their irrigation water from a 750-foot well. With time, there emerged concerns about dissolved minerals, bacteria, sodium chloride, and nitrate levels affecting the growth and quality of their crops.

The plumbing used by Riverview Farms predates the farms themselves. With decades of mineral and bio-film buildup, their old pipes were in dire need of some cleaning. According to Aaron Levy, a Riverview Farms VP of Operations, “When we first opened some of the spickets, the first thing that came out of them was a rancid smell that was enough to knock you off your feet. This smell was followed by a chunky-green, black discharge that didn’t resemble anything close to the water it should have been.” 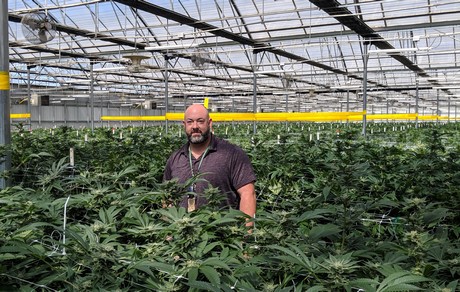 Treating the water before it brought the infectious bacteria to the plants was of paramount importance to the farms. Riverview Farms grows plants on a territory of approximately 27,000 square feet, which requires 2,000 gallons of water per hour. Riverview used a combination of fertilizer and irrigation equipment, more specifically an injection-drip irrigation system. The water is injected with liquid fertilizers to adjust values and then delivered to the plants directly through their roots.

Hydroponic growing generates wastewater, the disposal of which is expensive. The plants must be fed with nutrients in excess to provide the specific fertilizer components for individual plant needs to achieve accelerated plant production. The fertigated water is overfed by approximately 30 percent to provide more than enough nutrients for each plant. This generates leachate, water that percolates through the root systems. This nutrient-rich drain water is captured and stored for disposal. It can’t be used further to benefit the plants or discharged to the environment. As drain water travels from the plants to the storage tanks, it becomes fouled with pathogens and has to be disinfected if it is to be reused. Improper disinfecting will quickly inoculate the plants in the irrigation network with disease.

The Riverview Solution
Riverview turned to Tumwater, WA-based company CH2O, Inc., who had introduced a product line called Sure Flow into the irrigation water treatment sector. According to the company, this was the first E.P.A. registered chlorine dioxide product which increased nutrient and water flow through irrigation networks to help raise quality plants and crops. "Controlling mineral complexes and microorganisms in low-flow drip irrigation systems are indispensable to the cultivation of healthy plants," the team with the company explains.

Riverview removes their drain water from the greenhouses, one truckload at a time, for $700 per load. With the help of Sure Flow, Riverview Farms plans on using 70% re-circulated irrigation water with the remaining 30% fresh water, reducing their overall fertilizer nutrient costs by 70% to 75%.

Advantages of Using Chlorine Dioxide Over Other Oxidants
"There are several key advantages of using Sure Flow to eliminate bio-film compared to oxidants like bleach (chlorine), which is very commonly used," they continue. "Most microorganisms live protected by a film on the wetted surfaces in a typical water system or inhabit its walls, infecting the bulk water. Biofilms attached to a surface are referred to as sessile, and free-floating pathogens are planktonic. Bio-film is the general term for these enduring microbiological communities, which protect themselves by creating slime (technically a polysaccharide coating)."

Peroxides and chlorine do not penetrate bio-film effectively because of their fast and indiscriminate reaction with organic matter. "The reason traditional treatments fail to deliver positive long-term outcomes? They are only able to affect the planktonic organisms and cause chlorine residual in the bulk water, while the sessile organisms, causing the bulk of the biological problem, stay safe under the slime."

The company further explains that a distinct benefit the Sure Flow system has to offer involves purposeful delay in the conversion of sodium chlorite to chlorine dioxide. "The mixed oxidants from CH2O’s patented system travel through the entire irrigation network and are slowly activated by the acid present in the water overnight, as the system lies stagnant, and in between watering cycles. This ensures complete disinfection of low-flow irrigation networks without the use of chlorine, which produces phytotoxic byproducts that persist in the environment." 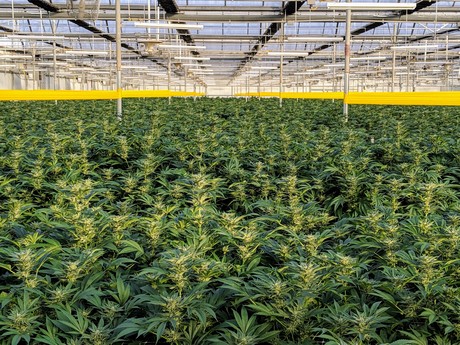 "Chlorine dioxide has a much more selective reaction mechanism, giving it the ability to penetrate and destroy bio-film. Once the bio-film has been eliminated, the chlorine dioxide level in the bulk water rises, causing a reduction in feed rate to achieve residual levels in the bulk water. Sure Flow incorporates a patented chelant in addition to the benefits of chlorine dioxide described. The chelant allows plants to assimilate the source water and micro-metal nutrients instead of being consumed by the bio-film. This makes nutrients available to the plants and starves the bio-film."

Sure Flow Solved Riverview Farms’ Problem
Sure Flow products dissolved the 16-inch bio-film that coated the 40-plus-year-old pipes. Earlier, Riverview Farms had to send 3-4 employees per acre to inspect and clean water drip emitters for 8 hours a day. The farms have about 108,000 emitters. They faced financial and crop production losses from failing emitters and were replacing emitters seven days a week.

Riverview’s water system was referred to as “pre-chlorine dioxide system” before they contracted CH2O and “chlorine dioxide system” after that. "By introducing SureFlow treatment, they lose just 10 emitters per month. Water quality improved markedly, and the time spent cleaning water filters and emitters dropped to 8 from more than 100 hours a month. Furthermore, Riverview Farms went from cleaning their Y-strainers once a week to just once a month. Riverview appreciates a healthier crop from minimal fouling and consistent irrigations."

According to the company, CH2O’s technicians calibrated it to adjust the product dose and adapt to changes in the flow of the irrigation system. The chelant, a binding agent, reacted with selected mineral ions to form a soluble complex that would stay in an aqueous state. Chelated minerals form amorphous deposits as irrigation water at the emitter tip evaporates. During the next irrigation cycle, these amorphous deposits are washed away easily.

According to Aaron Levy, CH2O’s product is indispensable to the farms’ successful operation. "Sure Flow Chlorine Dioxide is a critical part of Riverview Farms' cultivation practices,” he says. “It is mandatory." Like him, Riverview Farms’ employees have become convinced plant quality wouldn’t have been the same had they chosen any other water treatment system. "After Sure Flow was installed, the grower was able to produce healthy and vigorous plants of the superb quality customers had come to expect. Now, the company can guarantee all of its plants are top quality, and its bacteria problems are history," the company concludes.