The key is removing the barriers for medical cannabis in Australia

Although the plant is believed to have been first discovered 28 million years ago, Emily Rigby says it is a "new frontier" in protected cropping in modern farming. Speaking at the Protected Cropping Australia Conference 2019 on the Gold Coast, she told delegates it is the fastest growing industry world-wide, with 31 countries legalising medical cannabis in some form.

"It is a bit of a 'green-rush' and everyone wants in," she said. "It's a disrupter. It's a new industry. We need to educate ourselves across the board on this magnificent plant." 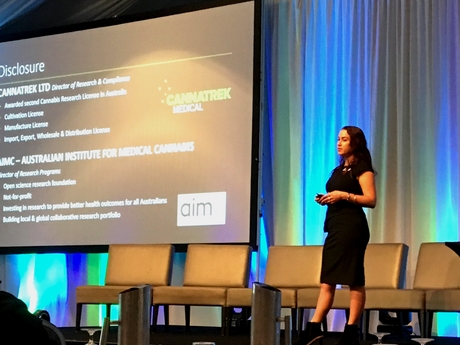 In Australia, the medical cannabis industry is regulated by the Office of Drug control (ODC), and the Therapeutic Goods Association (TGA). There are three licensing requirements; firstly, a medical cannabis license allowing for cultivation and production, then there is a research license that covers any experimentation including with fertilizers and lighting, and then there a manufacturing license. In addition, there is also export licences and individual background checks. The process is quite stringent, and takes can take a lengthy period of time, according to Ms Rigby.

Slow evaluation stage
"The evaluation stage is the one that really upsets me - 195 days for them to evaluate your application - and consider that you may have multiple applications," she said. "During this process, I can guarantee that you will have a few requests for further information, and when this happens, the clock stops. Depending on whether you request to make any minor or major changes, given that if you are waiting 9-10 months, you are likely to think of some improvements; a minor change should add 10 working days, but a major change resets the clock. The ODC are understaffed, so it's not really their fault, they are swamped with applications. This does not include what it takes to actually get a permit, which allows you to begin cultivating medical cannabis. So, sorry to anyone who was thinking of putting an application in and thinking they would be cultivating in 12 months - you should perhaps plan for it to be two years." 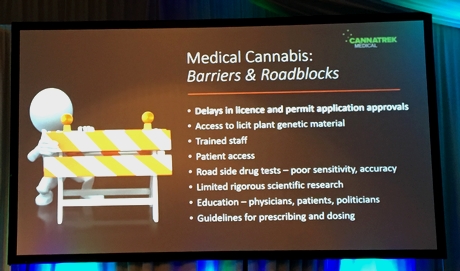 Currently there are 27 medical cannabis licenses, 17 research licenses, and 24 manufacture licenses. Ms Rigby also works with Cannatrek, who holds the full suite of Medical Cannabis licenses in Australia, and she is also involved with the Australian Institute for Medical Cannabis. She believes that medical cannabis was a casualty of prohibition in the 1930s, and being on the is on UN Single Convention on Narcotic Drugs as a schedule four has implications for countries like Australia, which is a signatory.

Should be available for trial
"Cannabis as a medicine is nothing new, and is quite possibly the oldest plant that is cultivated by humans," Ms Rigby said. "The first recorded use dates back to 4000 BC as a medicine. It is definitely not a Panacea, so it is not going to fix everything, and it is not for everyone - but that is the same for all pharmaceutical drugs. I think it is important that this is not a last line of treatment, but it should be available to patients to trial."

Automation
Ms Rigby explained that Australia has a great climate to embrace greenhouse production, but growers will need to look at a high level of automation in order to be competitive in the global market.

"Currently there is a good price for cannabis, but as more players come on board that price is going to come down," she said. "Our labour costs are very expensive, so we need to look at high levels of automation and technology. Possibly indoor growing will not be possible in Australia with high electricity costs. It's definitely popular in North America, but we have a much better climate so we can embrace natural light. We have fantastic opportunities, not just here, because we have a small population, but we have a fantastic opportunity to develop the industry to export around the world." 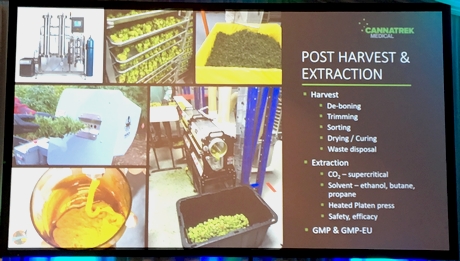 Still an unapproved medicine
In early 2016, the Australian Government amended the Narcotics Drug Act to allow for the cultivation of cannabis for medical purposes, and in March this year most General Practitioners (GPs) and specialists have been able to prescribe the drug. However, it is still an unapproved medicine, so it has to be done through special access pathways. There are currently 56 authorized prescribers in Australia, and 60-70 per cent of prescriptions for medical cannabis in Australia is for chronic pain.

"Cannabis is very easily propagated from seed, however this has a lot of genetic diversity," Ms Rigby said. "We need consistency, so we need to remove that genetic variation from seed production. It's also important we need to talk about the plant as cannabis, not as the slang term marijuana. That's one thing that the Australian industry has done well is call it medical cannabis."