How do you achieve the ideal light recipe?

The honest answer is that the ideal light recipe is still too expensive. The ideal would be a dynamic recipe that is different at the end of the day to how it was at the start. There are light sources available in which the light spectrum can be adjusted, but at present, they are mainly used in research facilities as they are still too expensive for use in a bigger production environment.

The light recipe used by a large proportion of growers who have LED lighting consists of red-blue/low blue and red-white/low blue. The main reason for this choice is its high efficiency; the grower gets the maximum amount of grow light for the least amount of energy. This is especially reflected in crops for which production is measured in kilograms, such as tomato and cucumber.

However, there are other reasons for choosing a particular light recipe. For example, growers sometimes want to influence a particular quality aspect or change the plant structure. This is common in ornamental plant cultivation and may involve (for example) the plant's compactness, development of the stems, buds and shoots, and the bud structure. In such cases, a tailor-made light recipe is created.

Light recipes are tested for various reasons, for example, because crops that were previously not suited to HPS lighting can now, with the right light recipe, be cultivated under LED. Or perhaps a grower wants to replace the current HPS lighting with LED, but first wants to know how to get the most out of it. We are also seeing a clear trend of growers making the step from HPS to LED or hybrid (a combination of HPS and LED). A higher light intensity is desired, but with lower energy costs and without additional radiant heat. This also requires adjustments to the light recipe. HPS lighting already includes a certain amount of far-red in the spectrum. Reducing the amount of HPS means that additional far-red must be added to the LED lighting recipe.

Testing light recipes
There are various ways to achieve the desired light recipe. The test method chosen depends on the desired timeframe. When sufficient time is available, a grower will often choose fundamental research without daylight, for example in an environmental chamber. If less time is available, a grower will start with a test within the production environment. 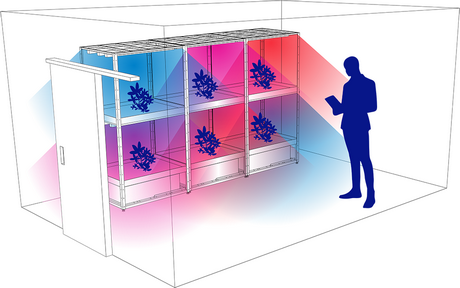 Both tests in the production environment and tests in an environmental chamber begin with a rough test. The next step is an examination of the extent to which changes to the plants' physiology have been realised. Based on these changes, increasingly more specific tests are performed, with adjustments to the different colours of the light spectrum.

Tip: The golden tip for testing is to continue repeating the test in different seasons. This enables you to test the results in the entire cultivation cycle.

If the desired result is achieved at the conclusion of testing, the financial feasibility of the light recipe is then considered. "In short, we consider the yield per square metre in relation to the energy consumption and the costs of the light source," the team with Hortilux explains. "The Hortisense grow light software enables the grower to monitor important performance indicators from the cultivation strategy, using this information to adjust the quantity of grow light. The grower can also call on Hortilux's Grow Light Performance Consultants, who assist in the interpretation of grow light data. The grower can then be sure of making the right decisions for optimal crop results."

"Once the desired lighting recipe has been found and applied by the grower, we see that it can still change over the years. Often the decision to make changes to the light recipe is due to advances in technology," they conclude.