40 years ago, in 1979, the Canadian Greenhouse Conference was organised for the very first time. Who could have thought back than that the event was to grow out to the biggest event for the horticulture in Canada, updating growers from the vegetable, floral and cannabis industry on all that's new and that their 40th anniversary would be celebrated with the largest conference in their own history? 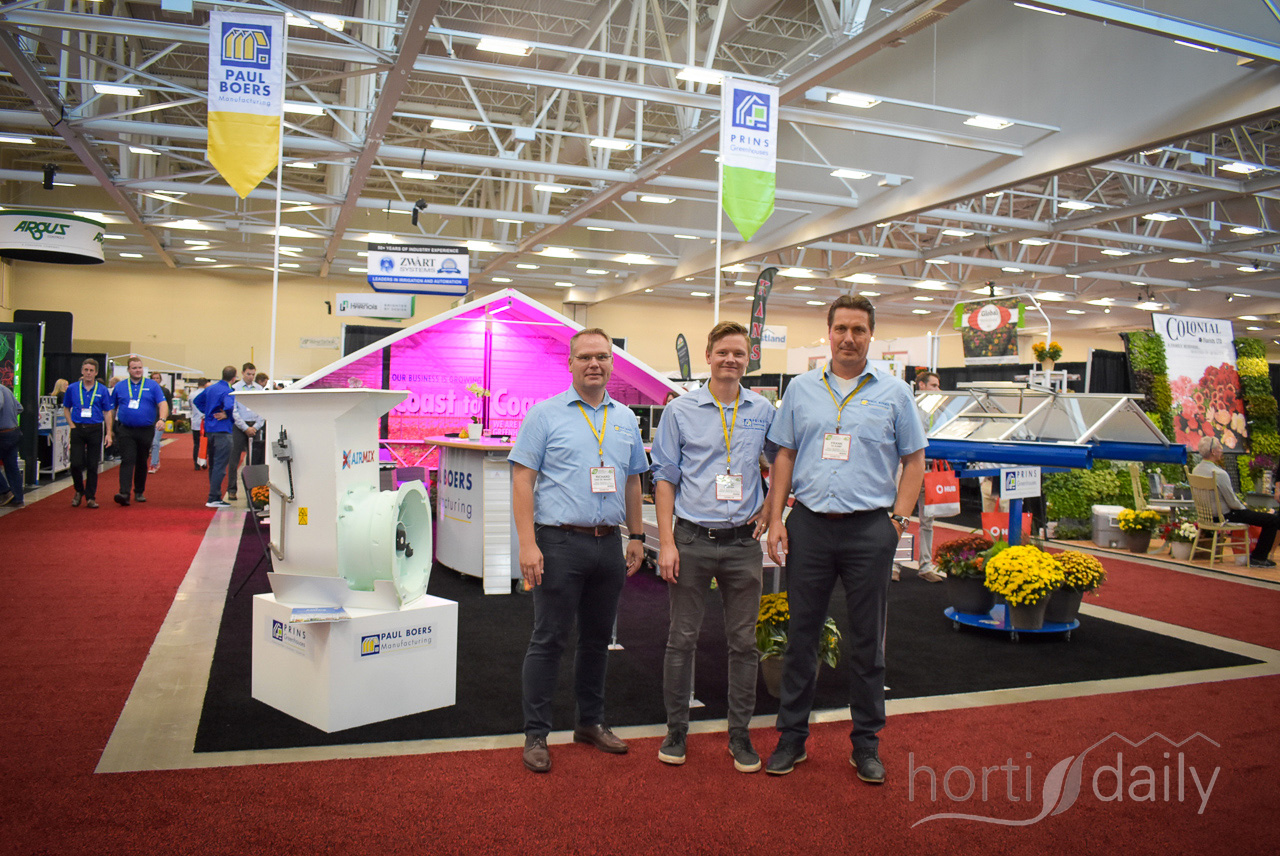 The Canadian Greenhouse Conference might celebrate its 40th edition, but Paul Boers LTD has been around for over 60 years! In the photo Richard van de Waard, Marc Rozema & Frank te Kamp.

Automation
The annual show took place last week for the 40th time and no different than prior editions it brought a complete overview on what's going on in the Canadian and also partly US greenhouse industry. At the moment this includes rising labor costs, making automation again an important topic for both post-harvest as pre-harvest labor-intensive tasks, tools for better climate control and new varieties, both in the floriculture as in the vegetable industry, but not yet for the cannabis growers.

New this year was the amount of additives presented for coir and peat substrates. These products are said to be of relevance for reducing the total amount of coir or peat needed and, even more important, to add better water retainability for the substrates.

Fibredust launched a wood fiber coir mix prior to the show and Andrew Pidgeon was presenting it - read all about it here: https://www.hortidaily.com/article/9150777/adding-wood-fiber-makes-coir-even-better/

Canadian market
So let's dive into the Canadian market. The greenhouse industry in Leamington is expanding day by day and this growth isn't expected to slow down next year. However the fast expansion of the cannabis industry seems to lower down a tiny bit - something that might not be visible directly next year, since still projects are signed and especially the big players in the industry keep on expanding -, but in the period after, something indicated by suppliers noticing slightly less quotations being demanded from this industry. It shouldn't come as a surprise since it would not be possible to keep the rapid expansion followed by the legislation of cannabis in Canada ongoing or eventually all of the country would be covered in the projects - and also since of course also the cannabis market is to be saturated at some point. The only question is when this will happen and what the effect will be on the prices.

The floricultural industry hasn't had easy years in Canada and the lowered acreage seems to have a tiny effect. Whereas the vegetable growers clarify their margins going down year by year, with higher labor and energy costs as a cause, the vegetable industry keeps on expanding indicating that the market is still fairly reasonable.

Picture time!
The Canadian Greenhouse Conference again provided an excellent event to get updated on all these topics and many more. In the upcoming weeks, we'll publish more stories on the developing market - but first of course it is picture time. With over 230 companies participating we haven't captured them all - so if you took a picture that we cannot miss in our report, please send an e-mail and we'll add it ASAP!