In a newly presented project, German aerial photographer Tom Hegen focuses on greenhouses in the Netherlands growing crops with LED lights. The project, called THE GREENHOUSE SERIES, shows the effect of illuminated greenhouses in the early morning. With his series, the photographer wants to show the possibilities and the disadvantages of high-tech horticulture.

Tom explains how horticulture can be used to feed the growing world population with scarce resources. “The Dutch have created the most advanced area in the world for controlled environment agriculture and have become world leaders in agricultural innovation. However, there are also consequences this growing method brings with it, like light pollution or growing crops out of season and ship them around the world, so people can eat strawberries year-round. Ordinances have been developed in which up to 98% of the electric lighting must be contained within a greenhouse facility by using blackout screens and curtains along the sides and roofs”, he adds to one of the photos. 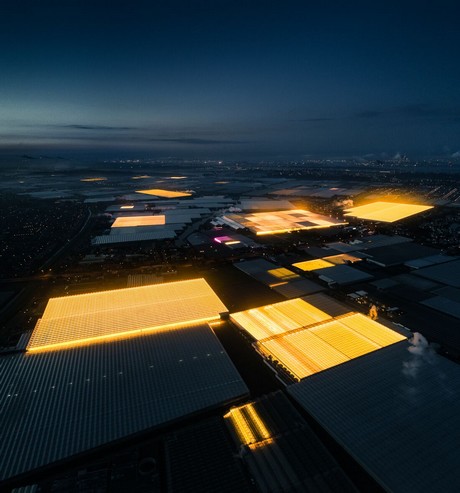 In the pictures, taken early in the morning, the pink and yellow light reflects on the morning damp above the greenhouses and the various intensities of light can be distinguished.

Dutch greenhouses using a lighting installation of over 15,000 lux (abt 200 mmol) have to use 98% screens from sunset to sunrise. Installations up to 15,000 lux have to reduce the light emission by 98% in what is called the dark period, during selected hours in winter, and with 74% during the general night hours.