US (NV): UbiGro to demo its greenhouse spectrum control technology at MJBizCon and the Emerald Cup

UbiQD, Inc., a New Mexico-based nanotechnology development company, recently launched its first-of-its-kind, nanotechnology-enabled luminescent greenhouse film under the brand name UbiGro. The films convert portions of UV, blue and green light into orange and red light, the most photosynthetically efficient colors. The retrofit films are installed on the interior of any size and shape greenhouse and work under any greenhouse material. The response from cultivators has been positive, and the company will be exhibiting at MJBizCon next week in Las Vegas, NV. According to their website, MJBizCon is the largest gathering of cannabis business professionals in the world. With 35,000 attendees from 70+ countries, including 1,500+ CEOs, 8,000+ c-level executives, and 1,250+ investors.

“We are excited to showcase our luminescent film technology at MJBizCon this year,” said UbiQD CEO Hunter McDaniel. “This is the premier cannabis industry event, and it’s a great opportunity for us to connect with cultivators and other industry leaders.” UbiQD has partnered with commercial greenhouses to install the UbiGro product in 15 locations across six countries and five U.S. states. The company recently released a white paper detailing pilot studies at two cannabis farms and one hydroponic tomato farm. 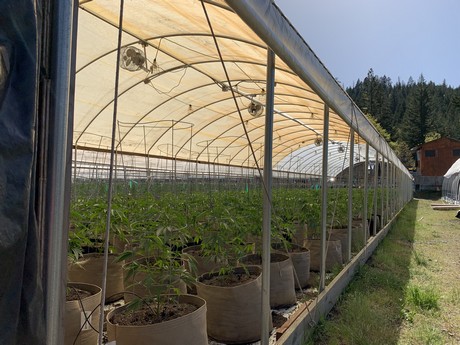 Cannabis pilot trials in Trinity County, CA, and Hood River, OR, reported yield increases of 7.7% and 5.4%, respectively, corresponding to payback times of 9-12 months. A tomato pilot trial in Alcalde, NM, resulted in a yield increase of 20.5%, corresponding to a payback time of 7 months. The company also reported negligible changes in the cannabinoid content under the film, and boosts in terpenes. The technology is expected to last more than four years installed in a greenhouse.

“We’ve done accelerated lifetime testing in our lab, as well as monitoring the performance of our luminescent films for over two years in real greenhouse environments,” said Damon Hebert, UbiQD’s Senior Scientist. “We’ve seen little to no degradation in the performance of the films when exposed to UV, heat and humidity. These films are engineered to withstand the greenhouse environment.”

While growers have been tailoring their artificial light spectrum with LEDs or other grow lights, UbiGro represents the first opportunity for greenhouse cultivators to tailor the color of their spectrum without using electricity. According to the recent report by Frost & Sullivan, “quantum dots are ideal candidates for optimizing the light spectrum for plant growth systems because they can be easily tuned to any color by absorbing the energy and re-emitting the light in a different color, depending on the size of the particle. This advancement represents a huge disruption to traditional grow lighting solutions, such as LED fixtures.”

UbiGro will exhibit at the upcoming MJBizCon in Las Vegas, booth C1263. Also look for them at the Emerald Cup the following weekend in Santa Rosa, CA, at booth H80.