Lighting and HVAC - are they friend or foe?

When it comes to managing the climate in a cultivation facility, energy use associated with cultivation lighting is typically considered the biggest challenge to overcome. Lights consume enormous amounts of energy on their own and require the use of even more energy to offset the heat they produce to manage temperatures in the grow room. While this is well understood in the industry, what’s not well understood by many cultivators is how your cultivation lighting also helps you to maintain your environmental parameters and can actually help you save money and energy in the form of assistance with maintaining humidity.

Surna gives some background information on lighting to help paint a picture.

The science
In any cultivation environment, management of humidity is an even bigger challenge than managing temperature. While cultivation lighting produces 3.41 BTU/kW of sensible heat for every hour that it’s in use (regardless of the type of light you’re using), cultivators also understand that their plants transpire nearly every drop of water they consume back into the environment, which requires substantial amounts of energy dedicated to the removal of that water from the air to maintain correct relative humidity. While maintaining both temperature and humidity are critical to a consistent, quality crop, poorly maintained humidity is the bigger risk of the two for failed testing, diminished harvests, and even total crop loss—making managing humidity absolutely critical for any successful cultivator.

This means that designers of HVAC systems for cultivation must consider both latent and sensible heat in their load calculations. Sensible heat is the amount of heat produced in the space that contributes directly to an increase in room temperature. Sources of sensible heat are primarily cultivation lighting, but include solar gains/envelope loads, pumps, fans, nutrient chillers, and other electrical equipment in use in the cultivation space. Latent heat is the amount of heat absorbed by the climate control system during the process of dehumidification. When the air in the cultivation space passes over the cooling coil of the HVAC system (or dehumidifier), sensible heat is removed. If enough sensible heat is removed to reduce the air temperature to below the dewpoint temperature, moisture condenses from gas to liquid form, collects on the cooling or dehumidifier evaporator coil, and drains out of the room. Just as the evaporation of water absorbs BTU’s (and creates a cooling effect), condensation of water releases BTU’s, and creates a heating effect. That heat is absorbed by the cooling medium in your climate control system but does not translate to cooling of the space—instead, that energy is used for dehumidification.  This means that in most instances we get some indirect dehumidification as a byproduct of sensible cooling, because when we’re cooling a cultivation space, we’re dropping the air temperature over the coils to below the dewpoint temperature. It also means that we get sensible cooling as a byproduct of dehumidification, because we have to reduce the air temperature to wring out moisture. 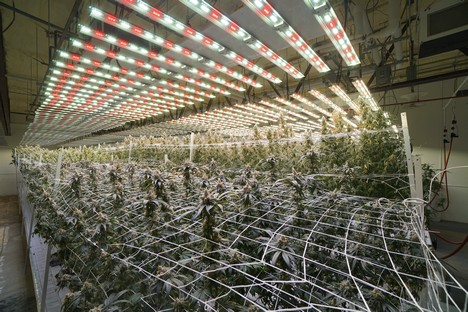 Light and dehumidification
So, where do your lights come in? First and foremost, when your lighting is enabled, your climate control system is in operation to maintain temperature setpoints—so, it’s going to be dehumidifying as a byproduct when it’s cooling in typical garden parameters (if you deviate from the industry standards and look for exceptionally cold or dry parameters, this may not be the case—but that’s a discussion for a different day). Your climate control system has a specific maximum sensible capacity and a specific maximum latent capacity at any given cultivation set points.  If the system is running for the purposes of sensible cooling, it’s also dehumidifying. So, while the heat from your lights promotes plant transpiration and creates a humidity load in the room, the heat they produce also helps you to remove that same humidity.

Wattage: What it means for your mechanical system
When lower wattage lights are in use, most cultivators look to raise ambient temperatures to maintain the same vapor pressure deficit (VPD) that they would have had with higher wattage lights. In those cases, water consumption per kW of light will typically increase. For instance, a cultivator who previously grew under a 1000 watt HID light at 76-78 degrees F and irrigated 1 gallon per day per mature plant, might switch to a 650 watt LED and bump up his or her target temperatures to 82-84 degrees F to maintain VPD in the absence of the more intense radiant heat produced by the higher wattage lamp. In that case, the cultivator will likely be irrigating close to the same volume as they were under the higher wattage DE bulb, but with less heat produced by the bulb. In these instances, well-engineered HVAC systems need to be able to dehumidify the air without necessarily reducing the room temperature overall via net sensible cooling, in order to maintain these humidity setpoints. Popular methods for humidity reduction without cooling include items such as standalone dehumidifiers (electric or desiccant) or reheat via “free” energy from the refrigeration circuit in order to reheat the air after cooling below dry bulb to dehumidify. The reheat can come in the form of direct refrigeration reheat in a packaged unit or hot water reheat via a secondary heat exchanger in the case of a chiller or co-gen process.

What else to consider
Changing system parameters also impacts the performance of your climate control system— no matter what type of HVAC system is in place. The warmer and more humid the space, and therefore entering air to the unit, the greater the capacity of your air handler or fan coil will be to absorb sensible heat and likely increase its dehumidification capacity as well. At Surna, we have always advocated for energy efficiency in cultivation facilities, and we certainly aren’t advocating for higher wattage lights—the point here that there is far more to consider than just a reduction in light wattage when considering facility design and overall energy efficiency.

Modulating hot gas reheat systems and 4-pipe chilled water systems both have an integrated dehumidification option. These systems don’t just dehumidify as a byproduct of cooling; they also have the ability to run in dehumidification mode, to a specific humidity set point.  In both types of systems, the cooling coil is enabled when temperature is satisfied but dehumidification is needed, and a reheat coil is enabled to reheat the leaving air temperature to match the entering air temperature. This allows the cooling system to operate as a dehumidifier without subcooling the space (which is possible at any time during the day, but of particular concern during the night cycle when there is no offsetting heat load from the lights). In both types of systems, the reheat is accomplished by reinjecting the sensible heat removed from the room as a byproduct of dehumidification back into the airstream before returning the air to the cultivation space. This is recovered through a reheat coil in HGRH systems, and via water side heat recovery from the condenser in chilled water systems. From a dehumidification standpoint, all climate control systems benefit from the heat produced by lighting during the “day” cycle in cultivation environments, but HGRH and 4-pipe chilled water are best positioned to take the most advantage of it.

With 4-pipe chilled water systems, the benefits can be even further reaching, as the heat produced by cultivation lighting can also be utilized to supplement heat in lights off rooms because it is captured indirectly and pumped via the hot water loop, unlike packaged units which are not connected to each other, or common areas of the building. In later flower, when humidity targets are generally lower and watering rates are generally higher, all or most of the sensible heat produced by lighting is usually needed in the space for the purposes of dehumidification. But in veg rooms and the first several weeks of flower, there is excess sensible heat that can be recovered from the condenser side of the chiller that isn’t needed for dehumidification in the room from which it’s recovered. It’s important to note that all heat recovery is done through the water or refrigerant in these systems, and not by mixing of air in any space—all cultivation spaces are isolated from each other and common areas at all times. The nature of chilled water systems allows for cooling and heating energy to be distributed anywhere in the building.  So, when excess sensible heat is available, it can be routed anywhere in the building (or campus)—including common areas, and for reheat in lights-off rooms when the facility is operated on a flip. This is another area where the excess heat produced by your lights can actually help you—not just with maintaining humidity in your cultivation spaces, but possibly even helping to reduce your ambient heating needs in the rest of the building.

It all comes back to design
When you’re cultivating in a controlled environment, what you’re really creating is an ecosystem, and there are interlocking relationships between every design decision you make. There are likely to be impacts that you haven’t even considered as you weigh your options—and as with anything, the answers aren’t black and white.