The double scourge of powdery mildew

Mention “powdery mildew” to a cannabis grower and they turn white. Mention the same words to a floriculture grower and all they can think of is how much pesticide spraying they’ll have to do to eliminate the pathogen. 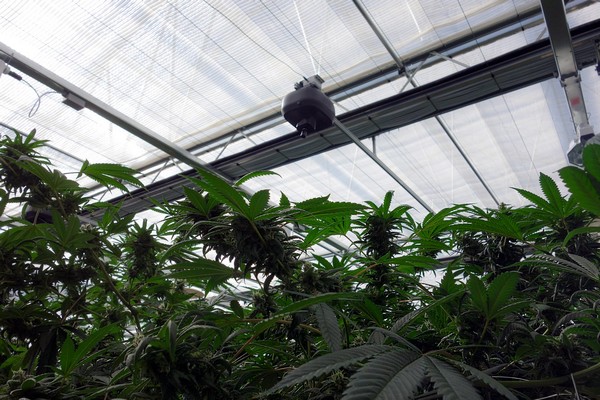 For many growers, the big expense isn’t the cost of the pesticides or dumping infected plants. It’s the expense of shifting workers away from other tasks in order to solve this problem. With labor shortages becoming almost an epidemic itself, no one has the luxury of repurposing staff from revenue-producing tasks to revenue saving tasks.

One grower, Theodore Huggins, put it this way. “I obviously can’t come in each day and do a thorough crop walk through each house. I’d never have time to do anything else. You have some choices; delegate it to one of your assistant growers, do it yourself or find some other way to inspect your crop on a daily basis the way you want it done.”

Zebra plants make up about 50% of the tropical house at one of our customer’s facilities and during his virtual crop walk one morning, the head grower thought he noticed what appeared to be powdery mildew in the center of his aphelandra crop. He hadn’t left for work yet and zoomed into that area using his cellphone app. He had experienced a similar problem a few months earlier and the results caused headaches, crop loss, and unplanned expenses.

The head grower at that time didn’t react quickly enough to the outbreak and waited until he saw it on one of his full, analytical crop walks. He didn’t catch it until two weeks into the problem. That wait was critical. Instead of one spray to 4,500 plants, the team had to use a systemic fungicide and then run it through their entire greenhouse.

The current head grower was not about to make the same mistake as his predecessor. Using a comprehensive greenhouse management and monitoring system, the grower reviewed the photos from that morning, pinpointed the area he thought was infected and noted that he thought powdery mildew might be on the crop in a particular section of the zone. He reviewed all the daily photos of that section for the past week to determine exactly where the Powdery Mildew first appeared.

“It could be six hours, it could be six minutes, or twelve hours or twenty-four hours but I’m going to find out where that powdery mildew started. Who was patient zero?”

Because he knew exactly where the pathogen was, as well as when and where it started, he didn’t have to spray anywhere else. If you only have 4,500 square feet of zebra plants why spray all 9,000 plants in the greenhouse?

There were two immediate impacts of his discovering the pathogen before it spread to the other plants. First, he saved endless hours of moving labor from planned tasks to emergency tasks. Second, the number of pesticides he had to use was greatly reduced. This had both a financial as well as environmental benefit.

The grower summarized his feelings.

“This translates into horticulture as well as cannabis, where you have to be very careful about any pesticides. People who don’t manage their labor and don’t do their crop walk effectively and don’t catch a disease early, well, they end up paying for it in direct monetary value and indirect labor value. It killed me to see all those hours lost with the other infection.”