When you flip the lights to 12/12 on an indoor cannabis crop, you trigger the production of hormones that tell the plant to begin building flowers. Within a couple days, those hormones are in full production and the race is on. At that point, a countdown clock starts and it cannot be stopped no matter what happens. After that date, you must try to avoid stressing your plant in any way. Stress in the flower cycle is the equivalent of tripping a runner in the middle of a race. That runner can still get up and finish, but it will be later, and flowers will be smaller in proportion to the level of stress you created. 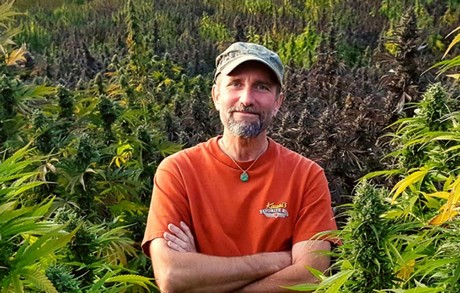 The goal is to have all major pruning done before you flip to 12/12, and all minor pruning and screening should be done by the end of the second week of flower. The third week of flower is when small flower buds will start to appear all over the top of the plant. If you provide optimum growing conditions, and nothing disturbs or stresses the plant for the full flowering time, you can produce the perfect run.

My pruning theory is based on two fundamental concepts:

For example, pruning a tiny 1” branch bud that is in the wrong place is far preferable to letting it grow into a large branch before you cut it. Pruning early essentially speeds plant growth by only allowing growth to happen in the places where you want it. Every leaf and branch that you cut off is wasted time and energy for the plant.

Prune early with snippers - not late with loppers.

Light Falloff - The “Inverse Square Law”
The maximum light levels for cannabis are fairly well accepted as being roughly 1500 uMols of light. Sunlight will often hit 2100 umol on a summer day so obviously plants can handle that amount, but for indoor production, lower levels are commonly used because 1) it has been determined that the increase in plant growth in the highest part of the range tapers off which means it’s not worth the price of the electricity and the added heat that it costs to get into the range above 1600 umol, and 2) the increasing VPD is more difficult to deal with as the light intensity and heat rise into that maximum portion of the range.

Of course the desired light intensity is FAR lower for unrooted clones and sick plants or when transplanting, but for the sake of discussion, let’s say the optimum “sweet spot” for comfy Cannabis plant growth is 1300 - 1600 umols at about 84-88 degrees F.

As you notice in the diagram, when you change the distance from 1 ft to 2 feet, you only get ¼ of the light intensity. This effect diminishes as you get farther from the light. Notice that between 5ft and 10ft the dropoff is far less drastic. This concept is used in the design of your grow space by placing more powerful lights, farther from the canopy. When you do this, you create an even flood of light coming from above as each light fixture creates a somewhat diffused beam that overlaps with its neighbors to the extent that there is very little variance in the pattern of light at the canopy level. 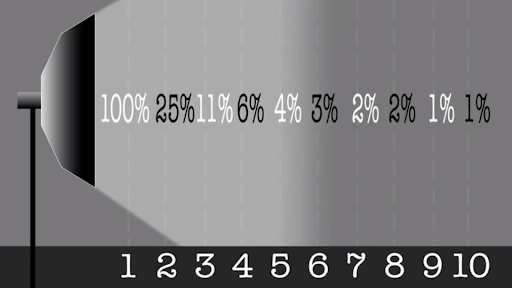 Here you see two heat maps for the same room. On the left the lights are 6 ft up. On the right you see the same setup with the lights 12 ft up. If the lights are powerful enough to deliver 1300-1600 umol’s at the canopy, you get a very uniform light delivery from 12’. 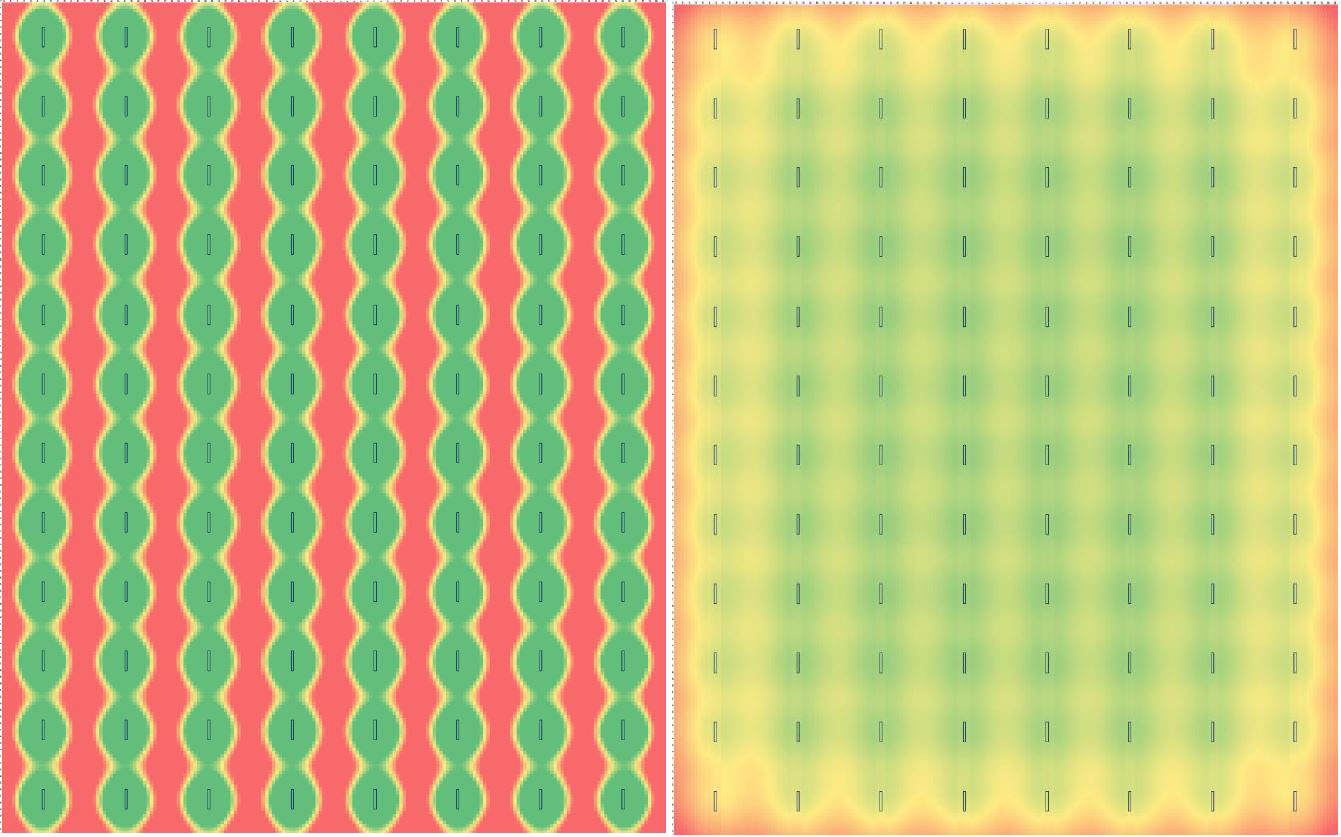 The farther the lights are from the canopy, the less falloff you have between the top and bottom of the canopy. The limitation on this concept is that the farther your lights are, the more power it will take to provide the desired light levels at the canopy height. So the closer your fixtures are to the canopy, the less power they consume to produce a certain level of light. Ideally, you would be able to physically change the height by raising and lowering the fixtures, or dim the power down as the plants get taller.

No matter what sort of lights you use, there will be a zone where the light intensity is in that “sweet spot.” Any closer and the plants get burned, much farther and the light is too weak to create maximum growth.

The remainder of this article is all about how to prune and train your plants so they have the maximum amount of leaf and bud material growing in that sweet spot.

The Inverse Square Law is why you need a flat topped canopy of flowers.
As the light comes down from your light fixture and strikes the two plants in this diagram, the plant with the flat canopy will obviously have more leaves and buds in the Sweet Spot than a plant that grows a “Christmas Tree” shape. This results in a FAR more efficient capture of the energy coming from your light fixture, and that energy is transferred directly into vigorous plant growth. Any light that passes all the way through the canopy to the table, without striking a leaf or bud…  money down the drain. 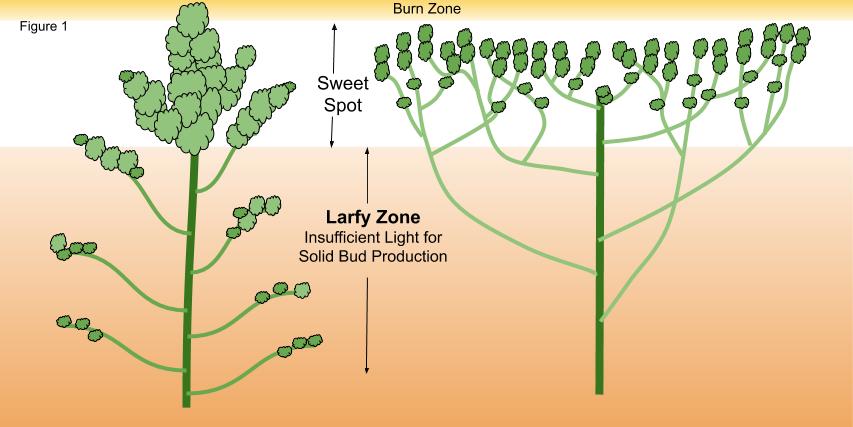 In Figure 1, notice that the buds on the left plant look larger than those on the right. For this discussion, imagine that both plants have exactly the same light and all other resources to create 1lb of bud material each. When allowed to grow into the natural “Christmas Tree” shape as on the left, you get a large concentration of buds into a couple huge cola’s at the top of the plant, and a lot of leafy “larfy” buds down below that don’t harden up. This material might create B grade flowers, or it might go into oil production - both of which are far less valuable than A grade buds.

So the tree on the left creates less A grade bud, and it creates a giant Cola that looks great in photos, but at the same time, that giant mass of plant matter creates a problem. The exterior of the giant cola becomes jam packed with buds that grow together as they get larger. Eventually the center stalk becomes isolated from the outside air. This obviously creates an airflow problem inside that protected zone. The problem gets worse if you allow a rapid drop in room temps in the evening after the lights go off. That spike creates cooler air outside the bud and warmer air trapped in a bubble inside the bud. As the temp drops, the cooler air becomes saturated with moisture until eventually the difference creates a dewpoint and condensation forms on the warmer stems inside that core. These tiny droplets of water are exactly what Botrytis and Powdery Mildew spores have been waiting for.

That big bud just became more of a hazard than it’s worth.

Suddenly the concept of dividing that same amount of flower material into a hundred small A grade buds that all have good surrounding airflow, with no B grade and no Larfy bud… starts to look like a great way to increase profits.

Trophy buds are for beginners
This statement may sound counter to every pot smoker’s dream of seeing their plants covered with huge buds, but those huge buds are mold factories. The same weight in smaller buds that are spread out over the canopy, and that dry down to hard little golfballs, are FAR preferable to a single gigantic cola the size of a baseball bat that ends up in the trash filled with Botrytis.

If you’re a commercial farmer, I’m going to assume you’ve seen enough buds to be over it. For commercial farming, the goal is to capture the light energy, and put that energy into a lot of smaller buds that are less likely to be infected with Budrot. In the end, you get more golfball size buds and every one of them will be harder and more sellable. There should not be a large pile of “larfy” buds that are only good for oil production. The goal of this pruning plan is to get rid of that larfy stuff and send that same energy up into your good buds.

Stay tuned for Part II of this series on pruning for cannabis indoor farms.