"It prevents just anyone from messing with it”, says Gerben van der Knaap, an engineer at the Climate installations department at Bosman Van Zaal. “You need to precisely take care of the soil and groundwater to prevent unwanted effects.” 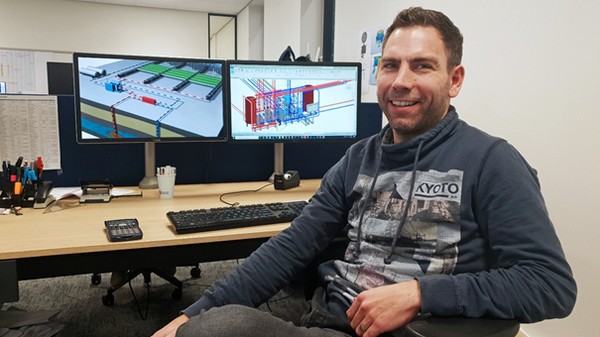 What are geothermal energy systems?
Geothermal energy is the heat and cold storage in the ground to a depth of around 200 meters. This can be in the form of open or closed systems. With open systems, the groundwater gets pumped from one source, which is guided through an above-ground heat exchanger for heat/cold transfer and is then injected into another source.

The direction of the flow usually changes twice a year, so from a cold source to a heated source and vice versa. “Open systems can provide large amounts of energy, making them interesting to certain horticultural businesses”, in Gerben’s experience.

In closed systems, no groundwater transference takes place but instead heat/cold transference via hose loops that have been placed in the ground—the so-called bottom exchangers. The amount of energy this wields is limited, which is why it is used in many houses and smaller utility buildings.

What makes a geothermal energy system sustainable?
A geothermal energy system is sustainable because it stores the solar heat you get in the summer into the ground which you can then use again in the winter in order to heat the greenhouse via the heat pump. “The cold that gets released during this process goes back into the ground and comes in handy again in summer to cool the greenhouse, in other words, to harvest the heat again. This type of long term storage makes it possible to waste as little (residual) energy as possible and causes a notable reduction of the primary energy usage when compared to traditional ways of heating and cooling. Also, geothermal energy systems are almost always combined with a heat pump system. This makes it possible to ‘get off the gas’ since everything is then electric.” 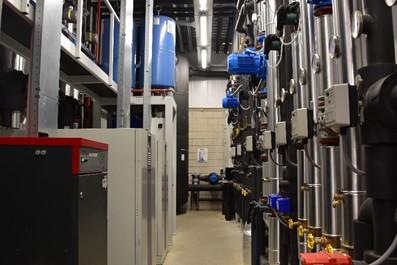 Photo right: The technical room in the building at Bosman Van Zaal. 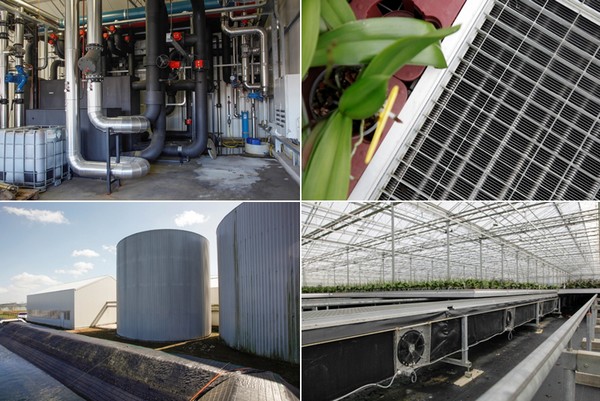 Bosman Van Zaal has also placed geothermal heating systems at a multitude of clients, such as Van der Hoorn Orchids in the Dutch town of Ter Aar and GreenBalanz in Kudelstaart. Because of this, the growers can now cultivate in a Greenhouse Without Gas.