Opportunities and advantages of liquid cooled LEDs in indoor cultivation

As the performance, cost and reliability of LED technology has equaled or surpassed equivalent discharge options, LED lighting has become a preferred solution for indoor cultivation. LEDs allow for greater controllability, slim form factor, and radiate less heat. Despite the common misconception that LEDs “do not generate heat”, they do. The majority of LEDs convert about half of electrical input power into optical radiated power, the rest is lost through conductive and convective heat, optical and other physical losses. Therefore, thermal management is a critical aspect of LED light fixture design, as its performance, light output and lifetime depend on the temperature at the junction of the LED. LED fixtures remove heat from the LEDs in two general ways: passive or active cooling. 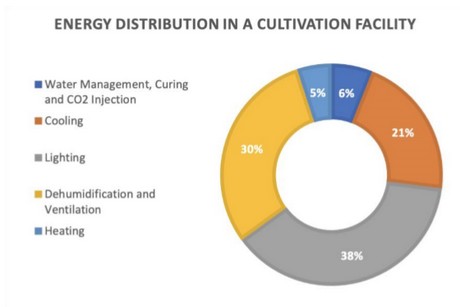 Energy use per system in an indoor cultivation facility

Actively cooled fixtures use additional external means for cooling. One common method is air cooling. Although effective, air cooled fixtures add additional components and complexity to the fixture and the heat of the ambient still has to be managed through proper HVAC sizing. These components and complexity can potentially translate to additional failure modes in the field and limited serviceability of the fixture.

There is a third approach to heat management in LED fixtures: liquid cooling. Although a minority of manufacturers currently utilize liquid cooling, the potential and opportunities can be significant. Liquid cooling utilizes liquid to transport heat away from a fixture using water or water plus an additive (e.g. propylene glycol).

Opportunities and advantages of liquid cooling
Generally liquid cooling systems function as follows: the liquid resides in a reservoir or contained within a closed-loop system. The liquid is constantly pumped through the fixtures which removes the heat. The heat is transported from the fixtures returns to one or multiple heat exchangers, which either reclaims the heat or radiates the heat to the environment. A liquid cooled system presents advantages in three areas: LED fixture performance and lifetime; uniformity in cultivation environment and facility operational and energy efficiency.

Cultivation Environment
The broader benefit of a liquid cooled fixture is creating a more stable and consistent grow environment. Indoor cultivation facilities require proper HVAC, dehumidification, and air flow design in order to manage the sensible and latent thermal loads in a cultivation room. It is of critical importance given the environmental demands of the space. Doing so requires sizing the systems adequately, taking into account the lighting fixtures, power supplies and plant biomass. If any of these systems are not sized and designed correctly, it can lead to issues like powdery mildew, mold and pests which affect the yield of the grow and ultimately profitability of the operation.

By removing the excess waste heat from the environment via liquid cooling, you are significantly reducing your overall cooling load and creating a more consistent grow environment for your plants. More so, because these fixtures are constantly trimming away the excess waste heat, HVAC systems have improved compensation for the heat during light-on and lights-off. This process creates a shorter transition period, on the order of minutes. Additionally, liquid cooled LEDs can provide significant advantage for a tiered-grow. Typically, upper tiers are at a higher temperature than lower tiers. Despite average room temperature being on the desired set point, there will be deviations from that average throughout the room due to localized variations in lighting, heat, humidity, airflow etc. This leads to microclimates in different areas of the grow. This is the case with any LED that is not removing the excess waste heat from the grow room.

Operational and energy efficiency
The advantage of liquid cooled LED fixtures in maintaining a uniform cultivation environment throughout lights on and in transition, translates into energy and operational efficiencies in the whole cultivation facility. 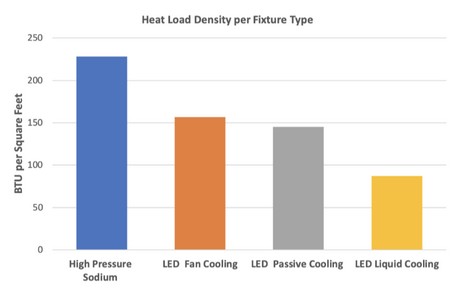 The reduced heat load of a liquid-cooled light can have benefits in two ways: at a CAPEX investment level by requiring a less sizable HVAC installation and at an operational level given the lower energy consumption of a smaller HVAC footprint. As a second-order effect, if the heat from the fixture is reclaimed and reused further efficiencies can be realized.

Liquid-cooled fixtures may require a higher upfront investment for the lighting system, potentially 2 to 3 times that of HPS. However, the calculation has to be looked at from the total cost of ownership and annual operations costs of the system versus the alternative HVAC and HPS lighting scenarios.

It is important to keep in mind that a liquid cooled system has to be properly designed. Doing it in ad-hoc fashion without proper understanding of heat loads, HVAC and dehumidification throughput, and opportunities to reclaim the heat may indeed lead to a much more costly system both upfront and operationally.

As indoor cultivation moves into the future, liquid cooling has the potential of providing further advantages as cultivators experiment with dynamic light treatments to achieve particular chemical or physical outcomes in cannabis. Lighting systems with tunable spectrum and intensity control will have to be carefully tuned with environmental controls to ensure the proper actuation and systems response. Solutions that are tightly integrated in controlling the interaction among lighting, cooling and environmental control will provide growers with a lever to achieve unique cultivation outcomes to differentiate in an increasingly competitive market.