For decades, scientists have known that plants protect themselves from the devastation of hungry caterpillars and other plant-munching animals through sophisticated response systems, the product of millions of years of evolution.

The biological mechanisms underlying this attack-counter defense paradigm have been vigorously pursued by plant biologists given that such details will help unlock a trove of new strategies for improved plant health. From countering crop pest damage to engineering more robust global food webs, such information is valuable for ensuring sustainable and reliable yields.

Now, researchers at the University of California San Diego and their colleagues have identified the first key biological switch, or receptor, that sounds an alarm in plants specifically when herbivores attack. The discovery is described in the online publication of the Proceedings of the National Academy of Sciences.

Animals such as humans, cows and insects are heterotrophs that derive their energy either directly or indirectly through the consumption of autotrophs, such as photosynthetic plants. This basic foundation shapes biological interactions across planet Earth. More than 30 years ago plant biologists came to understand that plants can sense an attack from herbivorous animals in a way that is distinct from damage caused by hail storms or falling tree branches. 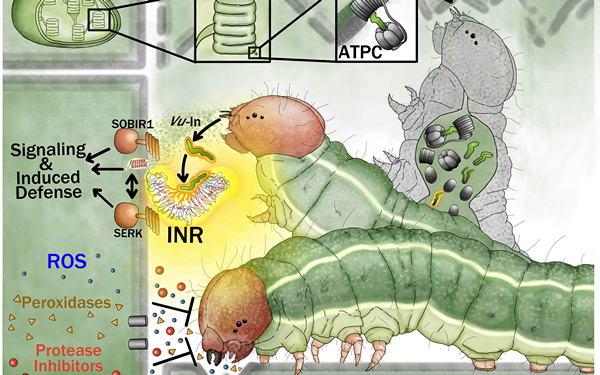 “INR represents the first documented mechanism of a plant cell surface receptor responsible for perceiving animals,” said Schmelz, whose work was accomplished by deconstructing and leveraging the active evolutionary arms race between plants and herbivores. “Our work provides some of the earliest defined mechanistic insights into the question of how plants recognize different attacking herbivores and activate immunity to animals. It is a fundamental question in biology that has been pursued for 30 years.”

Beyond beans, the finding raises interest in using INR, and potentially other receptors that remain to be discovered, as a way to boost defenses in essential agricultural crops.

“A key lesson is that plant perception mechanisms for herbivores can be precisely defined and moved into crops to afford enhanced protection,” said Schmelz. “We have shown one example but it’s clear that hundreds if not thousands of opportunities exist to identify and stack key traits to enhance crop plant immunity to herbivores.”