There are many benefits associated with controlling the temperature of the root zone. A healthy plant with a consistently optimal root zone temperature will be indeed more resistant to extreme temperature fluctuations in the canopy area, pest attacks, nutrient deficiency and fertilizer deficiency. If the root zone temperature goes off the optimal range, the plant would experience a reduction in micro-organism and micro-element activity, and would suffer from a lack of nutrients such as nitrogen, phosphorus, as well as micro elements such as iron. Additionally, the growth might be slower or could stop completely, causing poorer yields and quality. 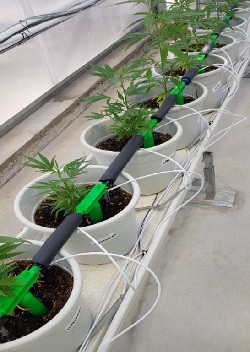 That’s why it is of the utmost importance to give the root zone the optimal temperature that allows the plant to express its full genetic potential. “When there is a hot environment, and you cool the root zone, the nutrient uptake rate is semi optimal or optimal,” Mark Fishman an Agronomist with Roots explains. “On top of that, cooling substrates under hot air temperature ensures oxygen availability, which impacts the plants growth and productivity. On the other hand, if you heat the root zone when the environment is cold, the plant growth is not stunned by the cold air or soil temperature, which can make you lose 2-3 hours per day in plant growth and photosynthesis.” That’s where the Roots’ Root Zone Temperature Optimization system comes into play.

Root zone temperature optimization
The upgraded Root Zone Temperature Optimization (RZTO) cooling system has been shown to increase yield the dry flower yield by 40% and THC from 18 to 21%  in some strains of greenhouse-grown cannabis in Southern California.

Increases of 30 and 118 percent were achieved during the US summer on two cannabis strains of 400 and 200 cooled plants respectively within a climate-controlled greenhouse utilizing wet mattresses and fans.

Roots' CEO and Chairman Boaz Wachtel said, “These results verify the effectiveness of our root zone technology on greenhouse-grown cannabis, more than doubling dry flower yield in certain strains to quickly generate a return on investment for growers while also lowering energy costs associated with traditional heating and cooling systems.

“The results also reinforce the uniqueness of our offering within the highly competitive cannabis market and are consistent with those achieved by cannabis growers in both North America and Israel.”

An Agronomist and Master grower at the greenhouse facility added, “Roots’ RZTO technology complemented our existing cooling methods to significantly increase the yield of our unique cannabis strains. In addition to increased yield, Roots’ technology also increased the quality of the crops.”

A new product is now introduced by ROOTS - the D-RZTO
The familiar RZTO system combined with a state of the art fertigation (irrigation and fertilization) system 2 in 1. The Roots RZTO system that is based on Heat Pump or  Ground Source Heat Exchange (GSHE) , can be provided now with a new heat exchange in pots probe (where the lower part is installed at the target crop’s root zone) and the upper pipe part provides accurate irrigation. 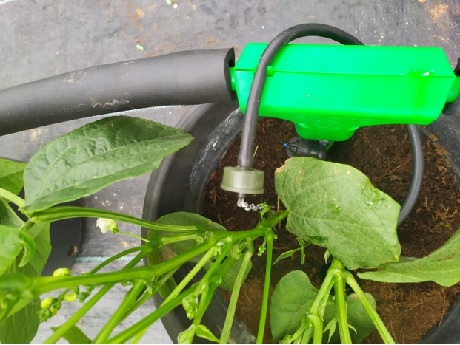 ROOTS unique fertigation and irrigation system (drip or sprinklers) is using, under variable pressure the same water pipe that is used for the heating and cooling of the roots zone coupled now with  irrigation purposes. The advantages are enormous as the system is easy to install or disassembled, allows pots mobility and by doing so it can be used for many growing cycles.

One control panel for controlling the roots zone temperature and irrigation is easy to operate. Using the same water pipe and controller for both irrigation/fertilization and for hatting/cooling the root zone is cost-effective.