How much energy can LEDs really save in greenhouses?

When switching to LEDs, your electricity bill will lower and your heating bill will increase. Sounds fair, and most growers are completely aware of this. But by how much? That's often unclear, even when the LEDs have already been installed. "Since electricity is measured in kwH and gas is measured in cubic meters, it's hard to compare - but these two are for sure interlinked," says David Katzin with Wageningen UR. Together with Leo Marcelis, Simon van Mourik and Eldert van Henten of Wageningen University, the PhD student is conducting extensive research on the efficiency of LEDs. With a model that makes it possible to compare the heat and electricity intake, he found out that the energy savings by switching to LED is only about 15 percent. 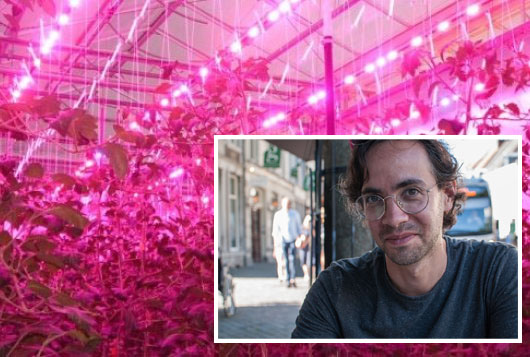 Light and heat are interlinked
"When talking about saving energy by switching to LEDs, people talk about saving on electricity. Yet light and heat are interlinked: If you would replace your HPS lamps with LEDs, you do miss the heat that comes from the top lights," David says. "Since LEDs emit very little heat, this must be compensated by the greenhouse heating system. That means it is unclear how much energy can be saved by LEDs when the need for extra heating is taken into account." Calculating this can be hard since the energy intake of heating and lighting are measured separately – with gas measured in cubic meters and lighting in kWh.

The team with Wageningen UR has developed the open-source GreenLight model that makes it possible to compare these two, by measuring both the electricity and the gas intake in megajoules. Over the last couple of months, they continued their research and found out more about the energy consumption. “Our numbers show that in most climates with traditional lamps, around half of the energy consumption from the lamp goes to heating and that the heat from traditional lamps is often useful in the greenhouse. The result in general is that LEDs will reduce electricity use by 40% but will increase heating by around 25%. Thus the total energy savings we currently expect is about 15%," says David. He adds this is not the complete story - thanks to the properties of LED, it might be possible to higher the yield. "But looking solely at the energy consumption, these are the numbers."

Costs of electricity
Now that the comparison can be made, parameters can be chosen on what to grow on: do you want to use the least amount of megajoules in your crop, or do the costs of the megajoules play a role as well? These can still be very different, since the costs of electricity are often more expensive than heating. “We focused on energy use, but the economic or environmental savings really depend on a particular greenhouse's energy sources,” David makes it concrete. “Since energy for lighting and heating is often derived from different origins, the benefits of a transition to LEDs depend on the environmental and financial costs of the available energy sources.”

For example, in the Dutch model replacing HPS with LED lamps make sense rapidly since gas is much cheaper than electricity. “The costs of one megajoule created by electricity are higher than of one megajoule created by gas,” David says. “And that’s often the situation: in general, electricity is a lot more expensive and more polluting than heating, which often comes from natural gas. Growers of course know this by themselves and therefore they already take this into account when switching to LEDs - but with the framework that we provided in the GreenLight model, growers can select lighting installations that make optimal use of available energy resources in the most efficient and sustainable manner."

LED it be 50%
The research is part of the bigger project focused on optimising efficiency by using LEDs in what eight doctoral candidates and three postdoctoral students are conducting research on reducing the energy use in a greenhouse by 50% by the use of LEDs. "This is extremely ambitious, and turns out to be far from what is currently feasible," David says and adds how the complete project involves researchers in Utrecht, Leiden, Delft, Eindhoven and Wageningen, all focusing on different components of optimizing efficiency with the use of LEDs. “For example, one of my colleagues published on the use of far-red in the spectrum, enabling higher yields. And there are more options to increase the yield by using LEDs: for example that you can use a higher light intensity or light for a longer period."

David will publish a bigger overview later this year or early next year.

For more information:
David Katzin (contact)
LED it be 50%
https://www.wur.nl/