“Plant transpiration is similar to a pool”

“The transpiration of plants is similar to a pool,” says Keith Coursin, President of Desert Aire. If looking at a pool, there’s a huge body of water with vapor pressured difference between the water surface and the air above it. “Therefore, the VPD (Vapor Pressure Deficit) is the driving mechanism that is just the basis of how we size a pool room dehumidifier,” he adds.

Whereas a plant has leaves that need to transpire to allow the photosynthesis process to continue by releasing the liquid water in the leaves to water vapor that releases to the air via the stomata. The amount they transpire is based on the vapor pressure deficit. So a pool and plants have similar mechanisms to calculate how much water vapor is released to the air.

Miscalculations
“What I see in vertical farms is that nobody actually knows how to calculate the humidity load,” says Keith. According to him, it’s the core fundamental of sizing the air handler that needs to be put to the space. The industry hasn’t developed enough. They know what to say about hydroponic lettuce and nutrients etc., however, when being asked about the evaporation transpiration rate, there’s silence. After designing a farm, many growers need to calculate what size HVAC goes in there. Many aren’t knowledgeable on that aspect. 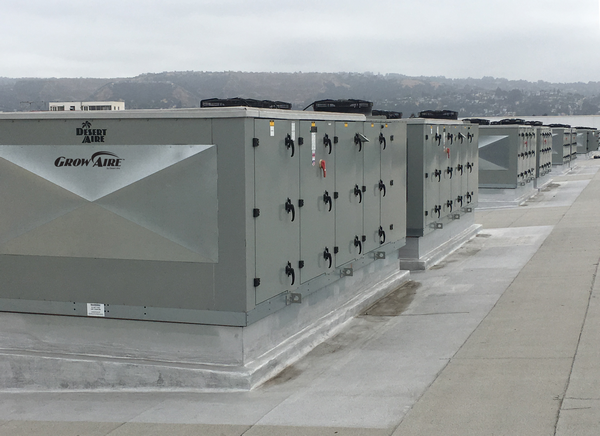 Since its inception in 1978, Desert Aire was a pool dehumidification company. The company has been involved with dehumidification for a long time in many different industries. About five and a half years ago they started receiving requests for humidity problems in indoor farms, with their first product placement in a lettuce growing facility. After that, Desert Aire did its research trying to figure out why an increasing number of growers would approach them.

‘An air problem’
“We were figuring out things such as how to size HVAC systems and whether it changes with plants and other characteristics within a facility. We’ve seen some facilities that opened their windows in order to cool their facility with dry air. However, if you’re going to Seattle or Boston, the outside environment is not as conducive to take care of the problems during certain portions of the year,” says Keith. 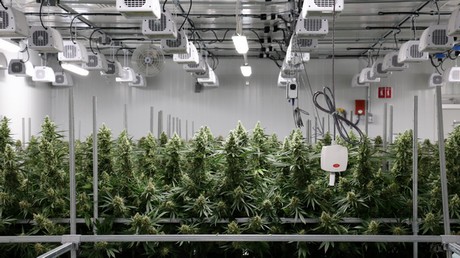 The company noted that many growers they visited had a light source, but also a heating problem during the dark photoperiod. However, according to Keith, when there’s a heating problem, there’s also an air problem. “The problem wasn’t cooling, but the main problem was relative humidity that would keep spiking. Most growers would use an air conditioner and portable dehumidifiers, spreading them throughout the cultivation room. It’s the most inexpensive methodology from a capital cost perspective used to ‘solve the problem’.

The bad part about that is, it creates a lot of energy costs as the systems fight each other and there’s lack of integrated control. Indoor growers started realizing that the better the control on temperature and humidity, the more crop yield and fewer energy expenditures,” Keith says.

The added ‘D’
“The indoor farming space added the ‘D’ for dehumidification to HVAC, because they realized that while technical HVAC types like myself understand that dehumidification was inherently part of the “AC” process, the indoor grow community was not aware of dehumidification. I can almost ignore the lighting impact on heat because once we size our machines for the latent (moisture) load the system covers the cooling load for lamps. In a way, a dehumidifier ensures a grower has the right features to handle both the cooling and moisture load. We’re sized properly for the system as our product is an integrated HVAC unit. 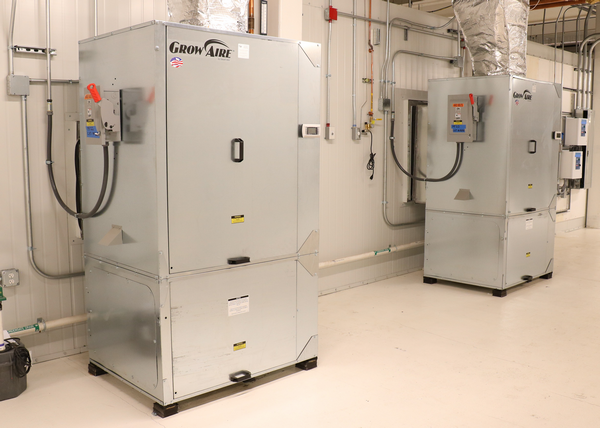 “The total lack of information from the cultivation industry forced us to go to a different plan. Growers are scared to death if their HVAC breaks down. We have them sign up to our AireGuard remote monitoring service that gathers data on the units’ performance via the cloud. They can assign the rights to this performance to their mechanical contractor so they will get a text message that says which machine is in alarm. They can then dispatch a technician to the site to resolve the issue and ensure safety of the crop. Whereas, the beauty of us monitoring is that a contractor gets to the site, calling us up and says ‘I’m seeing this, what are you seeing?’. We can direct him to the exact problem,” Keith says.

Over the last four years, Desert Aire has done some core research into how to predict evapotranspiration. The AireGuard system monitors all grow room installations and have over 50 different data points including refrigeration, temperature, humidity, compressors, etc. Keith adds: “By monitoring, we’re able to validate and refine not only the sizing program, but we also had to change and improve how to control the integrated HVAC system.” The company went through different generations of designs to do this. Desert Aire has nearly 1.000.000 sq. ft. of cultivation space that it’s delivered products for and that it’s monitoring.