Plasma treatment as an alternative to cannabis irradiation

One of the most challenging things for cannabis growers is to keep pests and pathogens at bay. Generally speaking, cannabis growers cannot rely on many solutions to fight pathogens. On top of that, the cannabis plant is way less forgiving than other agricultural commodities. Thus, it might happen that flowers still show signs of some sort of contamination, no matter how much care a grower puts into cultivation. However, such a result doesn’t necessarily mean that the whole crop is to throw away; indeed, some growers resort to irradiation to kill excessive bacteria and mold.

“In Canada, some growers send their cannabis to specialized facilities to have it irradiated by gamma-rays or e-beams,” says Dr. Florina Truica-Marasescu with Cold Plasma Group (CPG). “These sterilization methods have been around for a long time – they are used in many other industries, such as for the sterilization of medical equipment. But when it comes to cannabis, using irradiation is like using a hammer to kill small flies.” 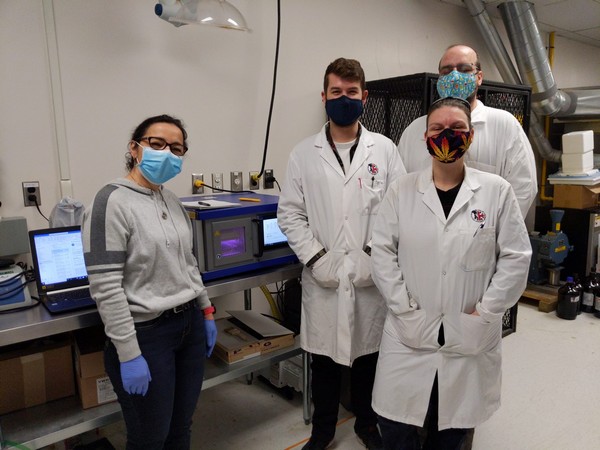 Cold Plasma and the ARC team at the Loyalist College in Belleville, ON with the plasma prototype used to validate and scale-up the plasma technology for cannabis decontamination

A hammer on flies
“The irradiation effects are too strong for cannabis, which is sensitive to the effects of heat and radiation. Irradiation with e-beams was shown to reduce the terpene content. Growers don’t want that: ideally, they want to submit cannabis with a certain profile, and they would like to receive the same product back. Alas, that’s not always the case.”

Irradiation has been shown to not only reduce the terpene content, but sometimes also the cannabinoid content. “It reduces the concentrations of terpene and cannabinoids, and some of the molecules are even slightly changed. At the end of the day, what happens is a reduction in the value of the product,” says Florina. “In some countries, the use of gamma irradiation for food products is outright banned, such as in EU countries. Thus, if a grower wants to export to the EU, they cannot irradiate cannabis – it’s just not an option.”

Radiation-free sterilization
That is why Florina and Plasma Group have developed an innovative method to clean harvested cannabis flowers that does not involve radiations at all. “The concept is based on plasma treatments,” says she. “I had this idea when I was talking with a colleague, who is a scientist in the cannabis industry. He was the first one to mention to me the problems of irradiation sterilization. So, he asked me if I had any idea on how to solve this, and I thought of plasma.”

Plasma has many shapes and forms and makes about 99% of all matter in the universe. “It looks like a luminous cloud,” says Florina. “Microscopically, though, it’s like a soup: a collection of very interesting sub-atomic particles. Some of them are radicals, some photons, some are charged particles; all these plasma components have excess energy. This energy is transferred to whatever is in contact with the luminous cloud.” The value of such a plasma treatment is that it does not penetrate too deep in the flowers, but remains superficial, killing all the microbes and bacteria on the surfaces of the cannabis flower but leaving the rest of the flower unchanged. 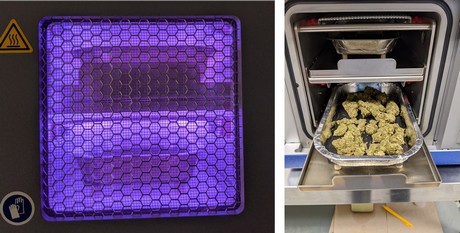 “Radicals are one of the main plasma players,” Florina points out. “Free radicals, like oxygen or hydroxyls, are created by applying an electrical field to a gas, in such way that it breaks down the gas molecules. Radicals are short-lived: they are created, then interact quickly, are consumed as a result, and disappear without leaving any residue behind.”

Even though the processes behind plasma treatments are particularly complicated, it is not necessary to be a  plasma scientist to use one of the CPG machines. “We have developed our systems with ease of use as one of our top priorities,” Florina explains. “Growers only need to put the flowers in the machine, select the program, and activate the process. There are some validation activities ongoing to better understand cultivar-specificities – which we assess together with the research team at the Applied Research Centre for Natural Products and Medical Cannabis (ARC) at the Loyalist College in Belleville, ON, where CPG has its R&D facility equipped with a commercial prototype.  Our large-scale machines come complete with process recipes, and growers just need to press a button, and their cannabis gets decontaminated. Of course, the equipment also has a self-cleaning program, as keeping the equipment clean is of the utmost importance when dealing with sterilization, generally speaking.”

Thus, plasma treatment seems to be a safer option than irradiation. “Our process does not reduce the cannabinoid content,” Florina remarks. “We have done many trials and tests, followed by analyses performed by the ARC team; we have looked at different molecules, but their concentrations have always stayed the same after the treatment.”