Playing with the dark period to influence flower formation

In most cases, tight dark period regimes are used for flowering in the generative phase of cannabis, usually it's of 12 hours. However, playing with dark periods offers opportunities to further manipulate the flowering, according to the Delphy cannabis knowledge and advice team.

There's still a lot to understand about this aspect of cultivation, but a lot can be gleaned from other crops that are photoperiod sensitive - especially chrysanthemum.

Generally speaking, the knowledge in those crops can be applied to cannabis; that's why Delphy and a number of partners will further explore this topic in Bleiswijk later this year.

Playing with the dark period offers opportunities, but can also have drawbacks if carried out improperly. It is crucial to know what exactly triggers bud formation, thus growers have to be sure of what they are tweaking. 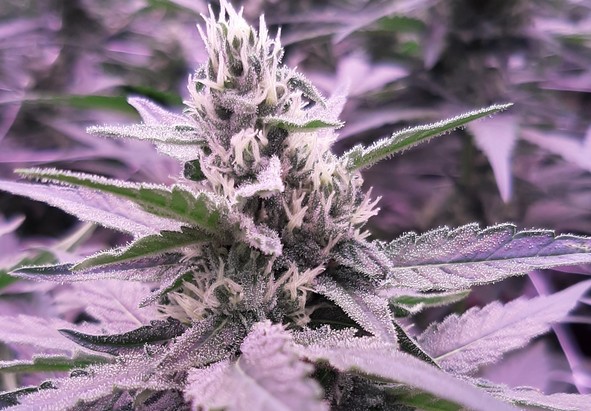 Flowering
Cannabis is a short-day plant. That means the bud is formed as soon as the nights are long enough. With regards to that, the term short day plant is actually wrong. Long night plant would be a more fitting name. Another crop that flowers under the same conditions is chrysanthemum, for instance.

Over the past 60 years, a great deal of knowledge has been gained about this crop, in floriculture. And such a knowledge can be very much applied to cannabis. Although there are varieties that are day/night length neutral - including some chrysanthemums - these are not the most common varieties.

Flowering starts after more than 7 hours of dark period
When a cannabis plant is provided with a dark period longer than 7 hours, it goes into the generative phase. Instead of splitting off leaves, the plant starts producing flowers. After two cycles of a sufficient enough dark period, the plant fully enters the generative phase. Missing one night of light, for example, due to a malfunction, is therefore no problem. On the second night, some of the plants will have budded. On the third night, 100% of the plants will have got into generative. Because bud formation starts after 7 hours of dark period, it is also wise to always maintain a minimum day length of 17 to 18 hours during the vegetative period.

Standard: dark period generative phase 12 - hours
A dark period of 12 hours is used as a standard in cannabis to ensure a smooth flowering process. However, playing with this dark period is an option that influences the growth of the plant. Knowledge of this can also provide insights into addressing problems such as foxtails.

What happens when you start playing with the dark period and in which phase of the cultivation is this applicable? To answer this, there are a number of facts/statements/assumptions

At the beginning of the dark period, the plant is virtually insensitive to factors that can disrupt bud formation. This is in contrast with the second half of the night. A short, undesired incidence of light, or (too) low temperatures have hardly any influence on bud formation in the first three hours of the dark period, but they have a lot of influence at the end of the night.

A longer dark period gives a faster bud formation; after all, the plant has longer during the night to establish and develop the bud. A longer dark time will give a smoother bloom, but a smaller flower (assuming all other conditions remain the same). High temperatures with little moisture removal can have a negative effect on bud formation, causing a delay in flowering or a so-called foxtail (the bud will become vegetative again). How generative/vegetative a crop is is also determined by genetics.

Considering these points, playing with dark period/bud formation offers the following possibilities in the cultivation of cannabis: If you have a crop has having difficulties with the flowering, maintain a longer dark period. For instance, half an hour longer; so, not 12 but 12½ hours of dark period can already have a lot of influence on the speed and evenness of bud formation.

If a crop is too generative for you - visible because the flower buds remain too small - then it is a consideration to stick to a slightly shorter dark period. Instead of 12 hours, you can consider using a dark time of 11½ hours.

From other crops - especially Chrysanthemum - it is known that you can also influence the flower size by giving a so-called vegetative break. This means that 2 to 3 weeks in the generative phase puts the plants back in the vegetative phase for 1 night by giving them 6 hours of dark period for 1 night instead of 12 hours. This also allows you to grow a larger flowers.

Botrytis can be a major problem in cannabis, especially in the autumn when growing in a greenhouse. Problems with this can be limited by having lights on for more hours in the final phase. Even 24-hour light in the final phase may be an option.

Foxtails can be a problem in greenhouse cultivation in the coming months. But they can become an ever-present issue indoors. Genetics have a major influence on this, but better control of budding is certainly also an issue. It is known that this problem occurs especially at high temperatures and too little moisture removal at the beginning of the night. The plant does not start budding quickly enough, so the dark time of 12 hours is too short for the bud to establish properly. Among other things, lower temperatures and more moisture removal at the beginning of the night are a remedy to prevent foxtails.

What is mentioned above is a brief summary of the many options available to play with the vegetative/generative balance in the generative phase of cultivation.

Much is also still unknown and has yet to be further investigated - which is defintely a good reason for Delphy to start a knowledge center for the cultivation of cannabis in collaboration with several other parties in Bleiswijk. In addition to advice and training on location, online advice and training is also possible.