After installation, the growers notice that their crops are growing faster, with higher quality, shelf life and also more flexibility, because 'everything grows' under the sun. It is therefore not surprising that the fittings are now also being used in greenhouses as assimilation lighting.

That sunlight works well is no secret. Nevertheless, the lighting manufacturer's director Ronald Gronsveld speaks of 'rowing against the current' when he talks about marketing his fittings. This is because, according to him, a lot of attention is currently paid to creating light with all kinds of colors. "However, that is different from making sunlight," he believes. "We recreate real natural sunlight and offer a full spectrum from 380 to 780 nanometers in one luminaire. You can then add or subtract to that if you want more or less light, but the light always remains the same."

Intermediate colours
Growers Vincent van der Gaag of Urban Agrotech and Leonard Boer of From Boer also endorse this. They both use Rofianda fixtures. In the case of Urban Agrotech in a self-developed cultivation container with a unique, striking carousel. "When we started our project, we immediately started testing lighting. All possible color spectrums were considered."

After a while, Vincent also started working with spectrum meters and measuring. "It was then that he noticed that the differences were really in the details and that the intermediate colors in particular made a big difference. By choosing an exact copy of the sunlight spectrum, we were able to capture all of them optimally. This is now reflected in the shape and weight of our herb and lettuce varieties." 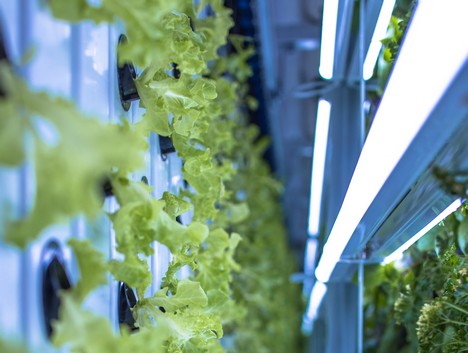 Urban Agrotech cultivates with sunlight in a cultivation container

Lettuce grower Leonard Boer has also done a lot of testing with lighting. The reason for this was a move to a new greenhouse in Dinteloord. There the growers grow their various types of lettuce on two layers under 7 covers in a special nursery of 4000 square meters. The bottom layer is virtually daylight-free, so the growers sought out sunlight here. "These days, anyone can make anything with lighting, but that does not make it sunlight, as we discovered when we tested a spectrum meter in our test container. The crux lies in the relationships between the colors." 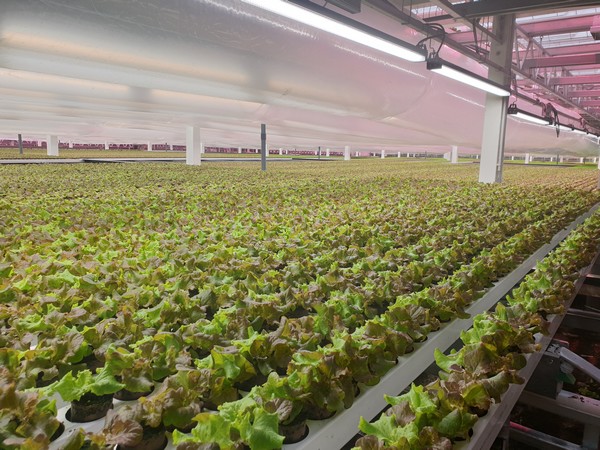 Sunlight led in the lettuce crop at From Boer

Flexibility
Both growers praise the flexibility that the 'sunlight fixture' offers them. Vincent: "We create one system in which growers can cultivate several crops at the same time. Then you have to make compromises in your choice of lighting. Not all species like the same kind of light, but everything grows well under sunlight."

Leonard recognizes that. "Every grower recognizes that in spring the crop always starts to grow well as soon as the sun starts to shine. So you would prefer to have that all the time, without having to search for the best recipe for each variety or crop. On the contrary, you want all varieties and crops to do well. During tests in the container, you saw quality problems arise for some varieties with the selected spectra."

Generic light image
Ronald likes to point out that choosing a sunlight spectrum assures growers of a 'much more generic lighting regime'. "This spring, the dark days meant that growers had to use supplementary lighting. At those times, you see that growers with their existing spectrum have differences in the crop, because the spectrum created is not identical to the sun. By using our fixtures for both growing and assimilation, the light spectrum above the crop always remains the same."

This is also the reason why Rofianda does not see a future in hybrid lighting using its own fixtures. "Combining our fixtures with a 'yellow spectrum' of HPS lighting, for example, makes no sense. That only distorts the light image.

Shelf life
After about six months of operation Leonard has already noticed that the butterhead lettuce has grown an extra leaf more easily and, in any case, the crop is growing faster. "I'm positively shocked by this. What we saw in the tests, we are now seeing in real life. Vincent also noticed something else. "Our lettuce stays good for up to three weeks in the refrigerated section. That tells us that the quality is good.

And what about energy consumption? Not unimportant nowadays, Ronald notes. "There is a lot of emphasis on it at the moment. Certainly with good reason, although I sometimes wonder if too little attention is being paid to product quality. What does sunlight do, more naturally than anything else, to ingredients, for example? There should be more research done into this. I therefore see the longer shelf life of Vincent's lettuce as something positive. Just as I hear good things from a lily bulb grower who works with our fittings and gets the same colors in winter as in summer, with the same shelf life.

Energy use
Ronald says that growers can save 'roughly 25% in pure energy' with his fixtures. "And nine times out of ten, they can also do with fewer micromoles, precisely because of the full spectrum of sunlight that we offer."

Vincent recognizes this. "Compared to other fixtures we have tested, the energy conversion is very good. More micromoles* are emitted per wattage input than we have measured with other fixtures. In addition, the radiation heat is low. This is important for the heat load in our container. As a result, we don't have to cool down as much." 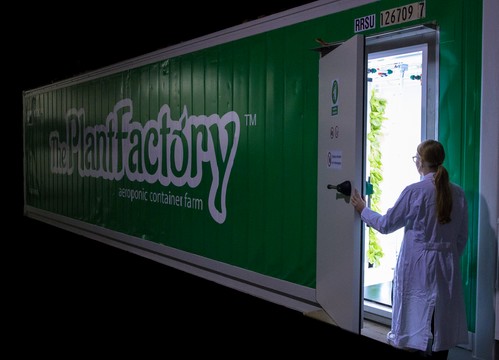 Everything in one chip
In the vertical farming market, in which Vincent is active with his cultivation containers, he sees that sunlight is becoming quite a 'thing'. "I see the subject come up significantly more often than a few years ago."

This is music to Ronald's ears, although growing awareness also means that there are potential hijackers on the horizon. "But", he is keen to stress, "not all sunlight is equal. We work with one chip that contains everything, and as far as I know, that makes us unique." And more and more growers are noticing that. "Even in tomato or chrysanthemum, where a lot of light is used and there is already a clear picture of 'what works', you see that growers are now reorienting themselves and (re)discovering sunlight."