Unlike other cannabis markets in the US, the Oklahoma one is certainly a case study on its own. Rather than putting the entry barrier high, getting a cannabis license in the Sooner State is easier than elsewhere. This created a situation where many LPs are active, driving the competition up, as well as the quality of the products. Although it might be hard to stand out in this plethora of cannabis growers, the goodness and power of a well-thought-out plan are not to be underestimated. This has been the element that has allowed Redbird Business Group to carve a prominent role in this uber-competitive market.

Right at the border
“We have set up our operation on the eastern part of Oklahoma, right at the border with Arkansas,” explains Bill Thurman, founder of Redbird Business Group, a holding company that holds a majority interest in RB RealtyCo LLC, which leases its Stilwell, Oklahoma  facility to Mariteq Growers LLC d/b/a Redbird Growers, and Mariteq Processors LLC d/b/a Redbird Bioscience. It is exactly in this area that Bill and Redbird have established their cultivation assets, covering the full extent of cannabis growing. “We have a wide product portfolio that is substantiated by indoor cultivation, greenhouse, and outdoor crop.” Each of these different cultivation methodologies has been carefully selected to ensure that there’s always high-quality cannabis as a basis. “We have chosen this location because it is a premium agricultural area with a lot of uncultivated soil,” he says. “In addition, this is an area where we have an unlimited amount of water and energy cost are quite low. Also, some ornamental growers that used to be active in California, relocated here exactly because of the many benefits of this area, from both an environmental and operational cost perspective.” 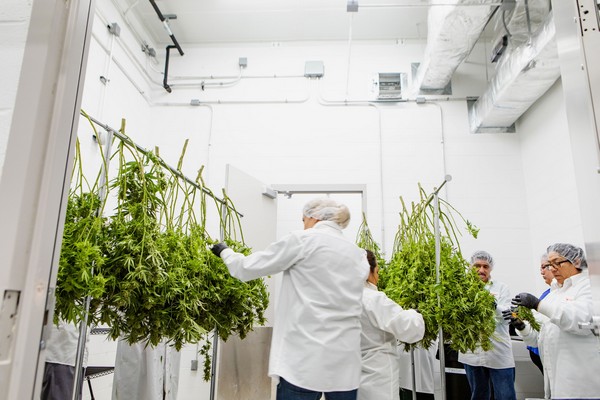 Managing different cultivation settings through large-scale manufacturing thinking
Bill was able to establish a successful business also thanks to his experience in different yet similar industries. “I was a large-scale contractor for poultry production,” Bill says. “And that’s where I learned the CPG model, which is used by thousands and thousands of farmers that do many different things. And the model we use here is very similar to that.” Such a model has proven itself to be the key to manage all the different cultivations, but also to micromanage the different cultivars that are grown at once – necessary to meet the company’s portfolio requirements.

“The indoor facility has 17 grow rooms,” explains Bill. “Redbird is able to grow a combination of strains in each room that combine in terms of nutrients, temperature, and harvest time. On top of that, we have a light deprivation greenhouse where we grow cannabis organically with a combination of sunlight and supplemental lights. Then, we have a 23-acre outdoor cultivation from which we get our oils and extracts.”

Thanks to this combination of adapting the knowledge gained in other sectors and a market that allows companies such as Redbird to scale up rather easily, Redbird is able to supply the entirety of the Oklahoma market. “We distribute to 600 locations across the state with same-day deliveries.”

Bringing the Blues to OK
The large foothold of Redbird made them the perfect partner for Jim Belushi’s farm to distribute their branded products in Oklahoma. “I grew up in Arkansas, in the countryside” Bill recounts. “There wasn’t much to entertain us as kids there. One night, my mom came to me and told me to check out this show: it was the Saturday Night Live, and there was John Belushi performing. His humor, his music meant a lot to me. So, fast forward to a few months ago: I was in Chicago at a show, and I saw Jim Belushi sitting at the bar. I usually don’t go to actors, but I felt I had to go to him and tell him how much his brother meant to me. At that time, I didn’t know he was in cannabis, and we just talked. That’s how it all began.”

From that simple and heartfelt conversation, a partnership was born. “We are going to grow his selected strains, both in the greenhouse and outdoors, and distribute them to Oklahoma patients,” says he.