BioHarvest Sciences has reached a significant milestone in its production of Cannabinoids, with its first cell reservoir producing Cannabis Trichomes for the past two years. "This achievement demonstrates the efficiency and reliability of the Company’s BioFarming technology to produce the “flowering” stage of the Cannabis growth cycle at scale, which is significantly shorter, more productive, and cost-efficient, and more environmentally sustainable than conventional Cannabis cultivation," the BioHarvest team explains.

BioHarvest’s technology employs the original Cannabis plant and its respective cells as starting material only once, allowing the Company to harvest 13-17 cycles per year versus an average of 4 cycles per year for conventional Cannabis cultivation. "Our bioreactors can reliably and continuously produce Cannabis cells without the need to source the mother plant, seeds, or any other starting material again," they continue. "This efficiency results from bypassing the “seedling” and “vegetative” stage, usually taking a Cannabis plant anywhere between 6 and 13 weeks." 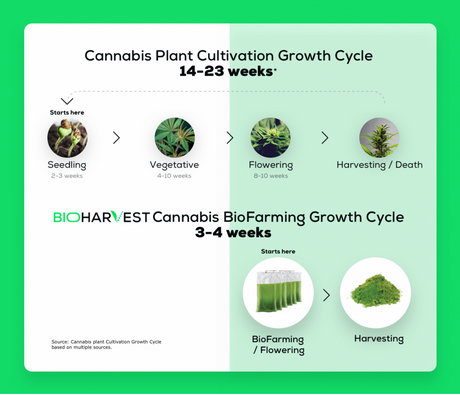 In addition, BioHarvest’s Cannabis cells are able to remain in the flowering stage continuously, in contrast to a typical Cannabis flower that will terminate after 9 or 10 weeks of flowering and will be immediately followed by the end of the plant’s life cycle. In that case, new starting material will need to be sourced and propagated, and new seedlings will be required to be grown through the vegetative stage, once again. BioHarvest’s BioFarming technology does not require the conventional propagation and vegetative stages and provides an unprecedented level of efficiency and consistency to the Cannabis industry.

“The repeated use of the same Cannabis cell reservoir for two years is an unprecedented scientific achievement in the Cannabis plant kingdom,” said Dr. Yochi Hagay, BioHarvest CTO.  “Our ability to keep our Cannabis cells in this “flowering” stage for the past two years versus conventional periods of nine weeks demonstrates the unique efficiency of our technology and puts us on track to reach commercial production using Cannabis-based compounds.”

Ilan Sobel, the CEO, said: “The Company is on track to commercialize its Cannabis-based products in H1/2022. The abilities and achievements discussed above take us closer to such a time when we can bring the power of the Company’s BioFarming technology to the Cannabis market. I am pleased with our progress and shall continue to update BHSC’s stakeholders periodically.”

Eitan Popper, Co-Founder and former President of MedReleaf, and Chairman of BioHarvest’s Board of Advisors, stated: “The fact that BioHarvest has been able to use the same cell reservoir for two years now, is a testament to the robustness of the Company’s technology and the quality of its Standard Operating Procedures. Reducing the growth cycle and total production time from no less than the conventional 16 weeks to 3-4 weeks, has immense economic and environmental implications.”