“Without the fog unit, temperatures would have soared to crop damaging amounts”

A temperature of 50 degrees might not come as a surprise for North American growers, but only when you're talking in Fahrenheit. These weeks the temperature in Lytton, Canada rose to an incredible 49.6 degrees Celsius. It’s a new record, but more importantly, it’s also a trend. “Whereas averages suggest the temperature remains modest, the recent years show weather patterns in June-September with multiple periods that temperatures reach over 30 degrees Celsius,” says Jurnjan Bremer with MJ-Tech. With its high-pressure fogging system, the company has helped many Northern American growers deal with high temperatures. 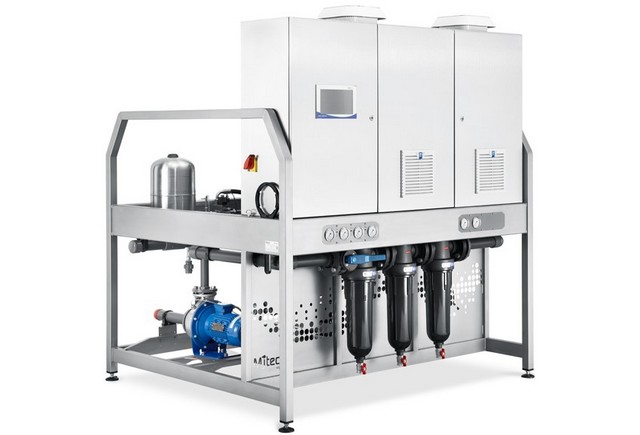 Crop damaging amounts
Among them is also Qualitree, an innovative propagation nursery, and greenhouse operation. Located on the outskirts of Chilliwack, they saw the temperatures rise, and rise, and rise. Fortunately, they installed a high pressure fog unit.

“Without having this fog unit, temperatures would have soared to crop-damaging amounts,” says Gary Neels, Director of Growing and Research. He says the company has been focusing on shifting to using VPD/Fog solely as their primary method of plant propagation, as the fog has been extraordinarily useful to them, particularly during the recent extremes. “While some seasons are better than others for this method, it has proven very well. Whether it was using for propagation or strictly evaporative cooling, the system proved to keep things in check better than holding under plastic.” 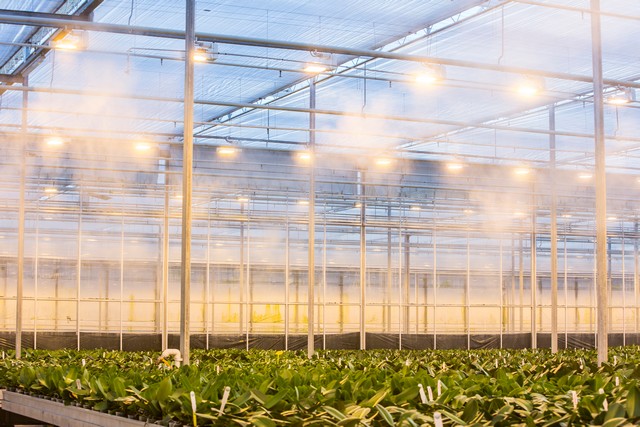 He sees that in sections where there was some plastic being used due to some crop timing issues, the fog kept the plastic cool and the temperatures underneath stable, without oversaturating the plants.

The additional source of humidity safeguards the greenhouse from exceeding a certain critical temperature. “As the fog evaporates into the air, particles change from a liquid to a gas and with that heat is removed (adiabatic cooling principle). You want to drop air temperature as much as possible without over-wetting the conditions,” Jurnjan explains. “If high levels of humidity (>90 %) are reached, the cooling ability slows down. By air exchange and bringing in ‘fresh’ air to replace the ‘high humidity used’ air, the process of cooling can be continued unabated and efficiently.”

“At these extreme times, we did see a small amount of fallout due to very heavy fogging, but it was minimal in comparison to what could have happened,” Gary says. “Also, with plants that are rooted and growing on, the use of evaporative cooling has shown significant growth and crop health overall.“ 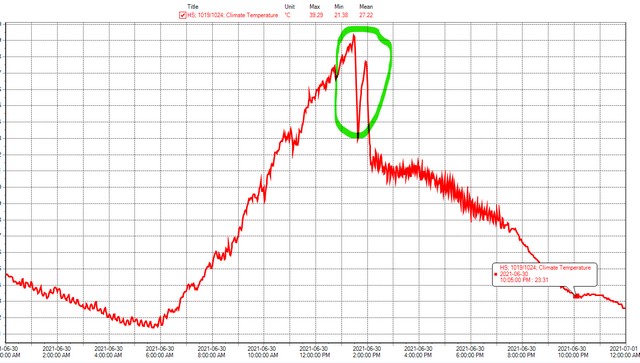 He adds that as it appears that nobody in Canada has ever experienced these temperatures before, there was a lot to observe and learn. “Since we are using the VPD system, balancing the environment is a tall task. The vents need to open to let out the heat, but we also need to hold the humidity in the greenhouse bays. We had to use a combination of energy curtains and shade screens to achieve this, while also regulating the temperatures.”

Some bays needed to stay completely closed (shade/energy curtains) as they had tens of thousands of stuck URC's, while others just needed a bit of fog to keep the temperatures regulated. “In the graph above, there is a moment where we see temperatures hit 40c without any fog. Once activated (see green circle) the temperature takes a significant dive and makes entering the greenhouse section bearable.”

Better recovery
Also, after the heatwave, Jurnjan says the effects of the fogging will remain visible, as the recovery of the plants will be much better due to a more hospitable climate. “During the day when the plant is transpiring it will use up internal reserves in the stem and other parts of the plant, when the radiation (and activity) is going down, the plants should restore those reserves and transport the sugars and elements. However, when the RH stays low, too late, the plant has difficulties refilling its internal reserves. It could be advised to try and build up some humidity earlier in the afternoon, either by closing the windows more or fogging which is easier in such extreme climates. Due to the difference in VPD, the plant will experience significantly less stress.” Also, due to the removal of extremely low humidity and high temperatures, some processes will have higher efficiency. “Generally, it results in fewer losses and more production.”

For Qualitree, the high-pressure fog system has proven its value. “It has proven effective and reliable whenever we decided to use this tool, so much so that we have decided to move forward with commissioning more units for the rest of our recent build, and the future greenhouse spaces. With the effects of climate change becoming more apparent, we can say that this tool is imperative to keeping our crops not only alive but also in ideal growing conditions. “